Soap In A Parka

Two years ago in Alaska I came across a very cute idea called Soap In A Parka. It's a home made bar of soap inside a felted wool covering. (OK, I don't know why but Blogger turned my pictures sideways. Sorry.) 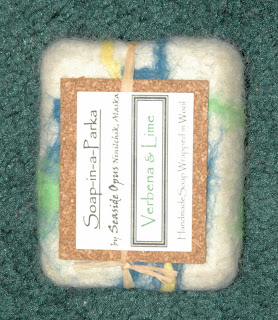 How they do this, apparently seamlessly, I don't know. But I think it's so cute. It has it's own built in exfoliant. Last year I saw them in several shops. I passed them up because they are quite expensive ($13.00!) but later regretted not getting some as gifts. I then began looking for them everywhere I shopped and *poof* I hardly ever saw them again. The once or twice I did, the fragrance selection was not to my liking. I came home empty handed. This year, I was in a store in Seward and found only a handful of them. I picked out the best of the fragrances, still not thrilled, and bought one.
I'm a bit confused because the front label lists a company name and the back label lists a different company name. Huh? Maybe the soap is made by one company and the parka is added by another? I'm thinkin' that's the answer. 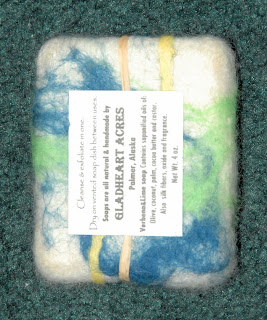 Also, I haven't tried it yet. I'll let you know when I do.

There are lots of handmade soaps for sale in Alaska gift shops. Among the most successful is a brand called Denali Dreams. I prefer glycerin soaps because they don't have the harshness and drying tendencies that standard soaps have, but I'm quite impressed with their little-venture-turned-big.
Posted by Judi at 1:45 PM