CABIN
We put up tongue and groove interior boards on part of two walls. 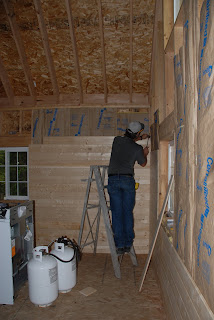 Here's to show you not only what a mess the cabin is during construction, but also how small it is. That's the same window as in the first photo. 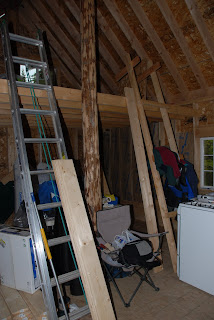 The cabin is a mere 16x20. 20 long and 16 wide. Our loft is 10 feet deep by 16 feet wide - just enough for some beds, a nightstand or small dresser, perhaps a chair. We'll be putting two twin beds up there that we can put together or take apart.
We couldn't wait to put some of The Fisherman's photos up on the new walls. Doesn't it look nice?! It may be small but we're excited to make it beautiful. This is the front; you can see "our view" through the window a little bit. I planted Mom's Forget-Me-Not seeds to the left and down the road a little bit. The road (driveway) runs between the cabin and the end of the dirt showing in this photo. 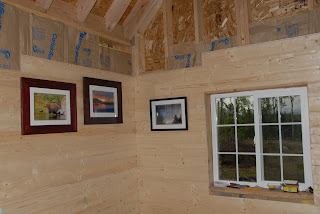 Note again the size...the door is all the way on the right side of the front wall and the window is the same one as in the photo above. 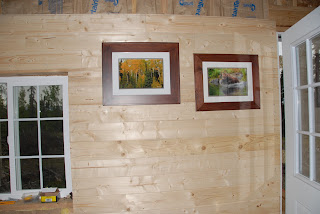 We've been noticing that 16x20 seems to be a very common size of Alaska cabin. It must be because it's manageable to build by yourself as The Fisherman did. But, much as I would like something bigger, we're very happy and grateful to have a cabin at all. We debated about where to put a bathroom, The Fisherman not wanting to take up too much interior room (I see his point) and me not wanting to sacrifice a real bathroom. He finally came up with the brilliant idea of putting a door in the back wall and adding on a bathroom of any size we choose! Excellent! In the meantime...we have plans for an outhouse and I don't know about showers. We'll probably first put in a shower but take "jug showers" until we get a water collection/delivery system up and running. Just like we did here in Arizona.

ROAD WORK
Before
This is actually where we got the truck stuck. Right in that little curve before the hill. It's all nice and smooth because we scraped over it with the backhoe after digging out. 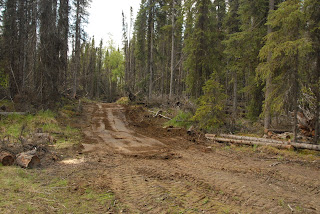 During
Here's a shot looking north. It shows the Typar road fabric we laid down first. 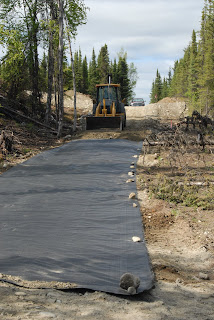 I was sitting on the edge of the road when I took these photos. For this next one, all I did was turn directly west. That's how dense the woods are! Those trees are on our neighbor's property. The nice strip of grassy earth in front of the trees that looks like you could drive on it is the road that was there when we bought our land. An unsanctioned road that turned out to be 75% on our neighbor's property. He made us move it. So The Fisherman had to rip a new road through our property right alongside the old road. You can see the stake with the pink tape marking the property line. Although, I think we had to move the stake more onto the guy's property so we wouldn't run over it with the backhoe. 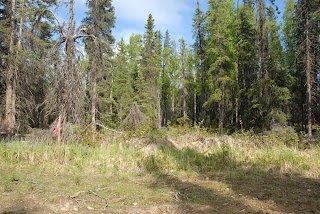 Now I'm looking south. Oh, nevermind the 4 foot table resting up against a stump in the background there. It's as far as we got with it until later that day when we took it to the cabin around the bend and up a hill. 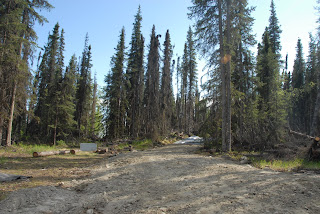