Tonight I am sitting in an old adobe library on the grounds of a place called Ghost Ranch. It sits nestled in among some of New Mexico's most beautiful mountains of varied colors and textures.

I had never seen the special hues of New Mexico's landscape before this week. When I was in college I studied the art of a painter named Georgia O'Keeffe. She did simple bold paintings of mountains, rivers, and close-ups of flowers. Her style was daring and her independence unusual for the era of the 1940s. I thought it would be interesting to someday see the area in which she lived and painted. 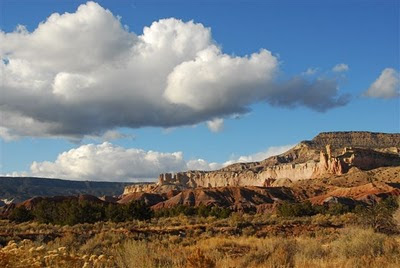 When I signed up for the CLASS Christian Writers Conference I had no idea it was in the very area of New Mexico that Georgia O'Keeffe was so passionate about. I'd seen her name mentioned on the website of the conference location but it didn't really sink in for me.
As I drove into the little town of Abiquiu this past Tuesday afternoon, I stopped at Bode's General Store. I thought I'd pick up a postcard commemorating the fact that I'd been there. There, in the back, were postcards of dozens of Georgia O'Keeffe paintings. Then I saw the table full of books about her. "Wow," I thought, "this must be the very area where she lived. And I didn't even know it until now. 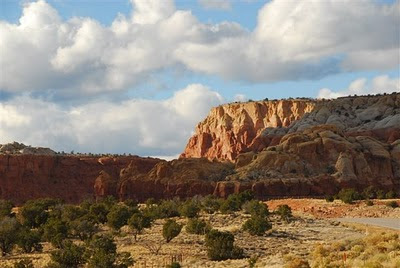 Not until I'd been on the grounds of Ghost Ranch for a couple hours did I realize that it was the EXACT location where Georgia O'Keeffe lived and painted. Her house is still on the vast grounds somewhere and tours are given.  What a fun surprise. [I've since learned that the house she owned on the grounds of Ghost Ranch was her summer home. The Presbyterian Church owns all of Ghost Ranch, but Georgia persuaded them to sell her a small acreage of it. There is no access to her Ghost Ranch home and no tours are given. Tours are given of her winter home in the town of Abiquiu. The Abiquiu house also serves as the Georgia O'Keeffe Museum. ] 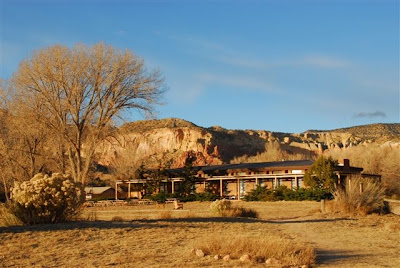 This is the Dining Hall where we eat our meals in the company of professional authors and editors. The Bunkhouse containing the little room I share with my new friend, Connie, from Illinois, is located just behind where I'm standing taking this photo.
I arrived Tuesday, November 9th. The conference began Wednesday and ends Sunday. It has been a really good experience. Really good.  I am determined to get to bed at a decent hour tonight. The last three nights have been successively later as I've talked with people and been in the library I'm sitting in now, editing and rewriting my piece for our daily critique groups. First night bedtime was 10:30. Second night it was 11:30. Last night it was around 12:30. Tonight, it's going to be 10:30 again. Ah, sleep. A good remedy for fast-paced, jam-packed days.
If I have time tomorrow night, I'll write more about it and post more photos of the beautiful setting.
I'll now gather my laptop into my backpack, bundle up in jacket and mittens, grab hold of my giant flashlight and make my way through the darkness across the field in front of the Dining Hall and to my room.
Good night, everybody.
Posted by Judi at 10:18 PM 1 comment: