WE RESERVE THE RIGHT TO REFUSE SERVICE...
I saw this photo collage in the Safeway in Soldotna. Seems they had a super cold day one winter which brought some unwanted customers seeking shelter from the cold. 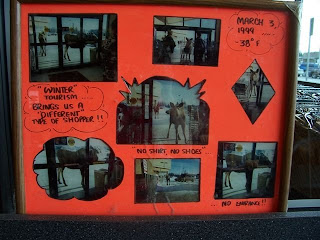 When you think about it, I'm sure just by walking up they opened the automatic doors. It's a wonder they didn't just walk right in. 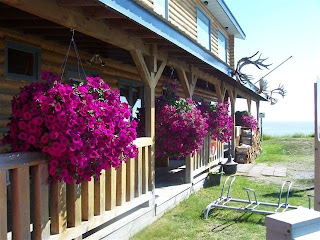 With so much daylight, plants tend to grow pretty darn big in Alaska. Note the moose and caribou antlers.

RUSSIAN ORTHODOX CHURCH
in Ninilchik, about 50 miles from our property. Very historic. 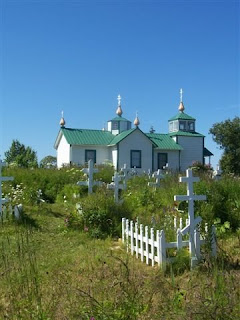 Behind the church is the water of the Cook Inlet. Across the water about 50 miles is Mt. Iliamna and Mt. Redoubht. Both are 10,000 foot volcanoes of which you can see all 10,000 feet because you're at sea level. They are beautiful snow covered mountains. This is Iliamna. 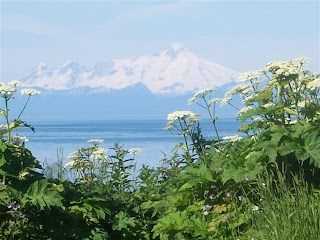 For some reason I totally love this photo. It's so simple with so little in it. 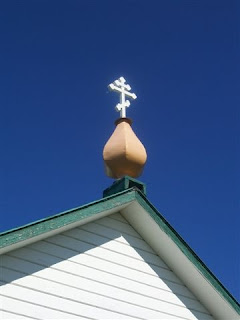 
COOL WATERS
I love this photo, too. I love the sparkling water, the pink Fireweed, and the sunspot reflection. 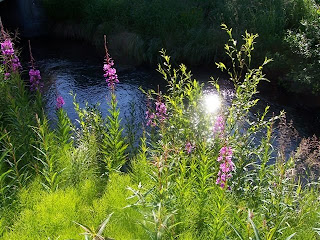 I stopped to take the photo for another reason though. I took it because it's..... 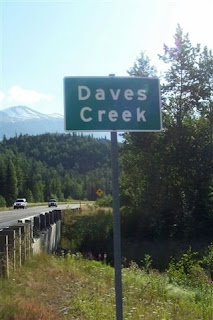