And then there's Bobo. You've already met him, but here's my favorite picture of him. 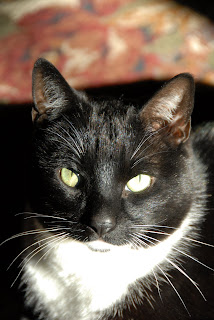 He looks to me just exactly like a cat should. When I think of a cat, I think of a black and white ... cat. He's just the perfect ... cat.

He got his name because when he was a kitten, his white whiskers were really short and it looked like a little white bowtie on his face. "Bow" turned easily into "Bobo". He's the most gregarious cat I've ever known. (Although I think my friend Angie's cat Kenzy just might be moreso.) The Fisherman specifically picked him out from among all those kittens running around (see The Square Backed Cat, below or here). His reason? Because as soon as The Fisherman sat down, this little black and white dude came blazing across the room right to him. He turned out to be an EXCELLENT choice. Good instincts, Hon.

This cat is just so much fun. Before we let them live inside all the time we used to keep them in their own little shed attached to the mobile home we lived in while building the house. We fenced off half of the space underneath the mobile home and put a kitty door in the shed along with some windows. They stayed out there summer and winter and were able to go "outside" safely. We'd bring them in to visit in the evening and sometimes we'd even let them out during the day while we worked. We kept a close eye on them because it's basically wilderness out here and they'd be lost forever in the blink of an eye. We'd also bring them into the house while we were building. Being outside or in the house was new and exciting for them, especially Bobo. He used to go on little sprints. He would all of a sudden RACE off down the path, or up a tree, or to some other part of the house. Then, almost the instant he stopped, we'd hear this terrific bellow. It was as if he'd raced off on his adventure and got scared as soon as he got there. It was so cute. He still bellows loudly when he wants something, usually attention. Sometimes, it seems he's just in the mood to talk.

Almost without fail he is sitting outside the bedroom door waiting for us when we get up. And if we sleep too late, he lets us know it. He meows loudly (kind of reminds me of kids waking up their parents on Christmas morning) and he takes his paw to the underside of the door, pulling and pushing it trying to get in. This morning I must have not slept too long in his mind because I opened the bedroom door to find both cats sitting quietly there waiting for me. What a nice greeting.

Bobo's favorite time is when we eat in front of the TV. He immediately jumps up to the back of the chair and starts to beg. If allowed (and sometimes he is) he will sneak his way down till his front paws are on my shoulder and his face right next to mine. This cat is so full of spunk he will actually lunge at a forkfull of food on it's way to my mouth! Sometimes, (OK, I admit it, it's usually when I play with him and tease him) he will take his paw and make little swipes at the fork. If we (teasing him again) quickly move the fork closer to him, you ought to see him lunge! And he will eat just about anything. He is quite the begger. Lest you think it's only me who is the sucker, he does this to The Fisherman, too.

I'll have to get some of our pre-digital photos scanned so I can post them. We have pictures of him actually clinging with his front paws to a cereal bowl The Fisherman is trying to move out of his reach. He also loves getting into usually forbidden places. Like the bedroom. (You see, I'm actually allergic to cats. I know, I know...don't even say it.) Or, say, the linen cabinet. 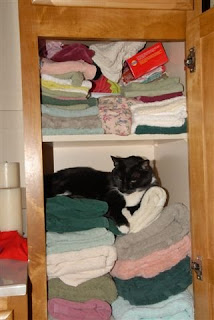 Actually, this is usually Mama's favorite forbidden place. Bobo surprised me this morning by climbing in there so I grabbed my camera. Isn't he cute, getting his cat hair all over my towels? 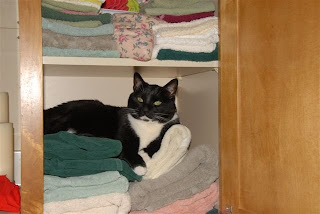 The Fisherman is so good with cats. He knows how to give them treats. Sometimes he'll pick up Bobo and just hold him up to see things from a different perspective. Oh, Bobo loves this! His head bobs up and down as he checks out these new and strange sights. He sniffs in the air and stretches his face closer to the wonders of the house from six feet up.