It was a hard winter in Alaska last winter. Places that only see one "deep freeze" (a spell of temps hovering around -20 or -30 for a couple weeks) saw 3 or 4 deep freezes. And snow! Record snow fall was recorded all over the state. Places like Valdez and Cordova saw about 400 inches of snow, if not more. It was a real problem to roof tops, walkways, and roads.

Here on the Kenai Peninsula, we saw the effects of heavy snow. We saw the usual number of evidences of avalanches: snow "spilled" down mountainsides and breaking highway guardrails.

But it was a first for us to see broken trees. 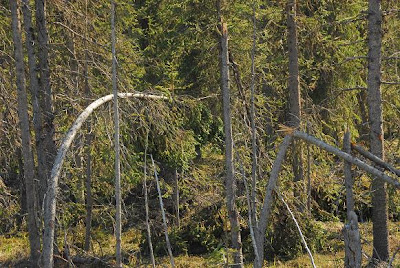 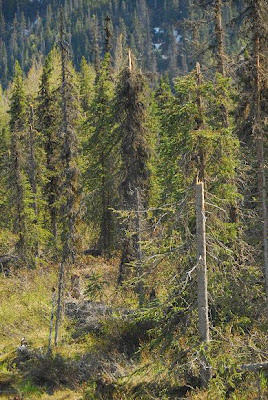 The side of the highway on one stretch was particularly damaged. It was in the mountain pass, where even in June much snow remained. 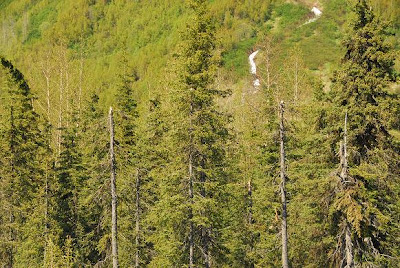 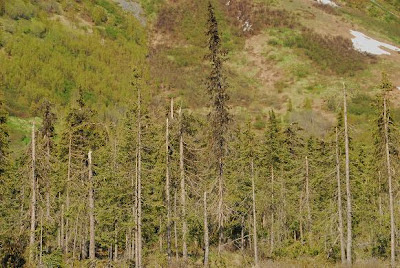 Snow was melting up top but down on the ground in some areas, mostly across the road and in the shade, it was still a couple feet thick. 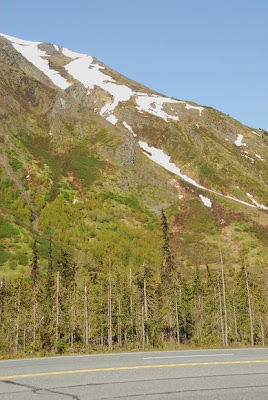 I wonder what these trees will look like next year. I wonder if branches will grow upward and hide the blunted tops. Or if perhaps the trees will die from such a shock. Many of Alaska's trees seem to be barely alive after the last decade's infestation of the bark beetle.

At any rate, it's odd to see so many trees simply snapped off mid-way up.
It was a hard winter, indeed. 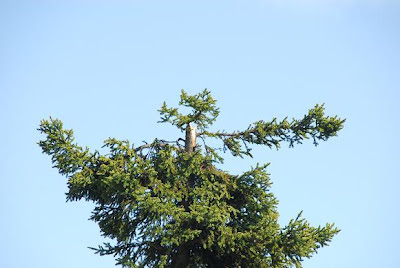