I just have to jump on the band wagon about my friend Kerri's post recently. I'm realizing I'm the not only one who can hang onto things forever, finally decide to give or throw them away, only to have a need for them arise within days. It must be Murphy's Law of Disposal or something.

I am sentimental. Which is why I have too many things in my house.

I am a just-in-case person. Which is why I have too many things in my house.

I recognize and appreciate the value of magazine articles, ministry newsletters, old retreat notes, and dare I say it?, old college notes. Which is why I have way too many things in my house.

And...I have had the regrets that go along with throwing out something that's been hanging around the house for way too long, only to need it or think of a brilliant use for it shortly after getting rid of it.

Which, is why I STILL have way too many things in my house.

Case in point: my old hiking boots. I bought them in 1984 when my friend, Lori, and I were heading to Europe for the summer. Those boots walked through St. Paul's Cathedral in London and C.S. Lewis' old haunts in Oxford and Cambridge. (below) 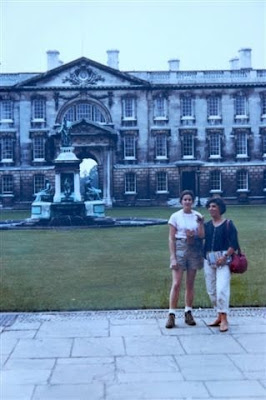 They got dirty with garden soil as I did my morning work before studying at L'Abri in the company of Francis Schaeffer's daughter and grandchildren. They accompanied me through an eerie 2:00a.m. train station layover in Cologne, Germany...alone.

They hiked in the Alps of Switzerland. 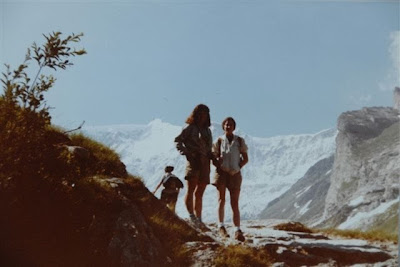 ...went on a gentle walk through the grassy hills of St. Michael, Austria, and they rested on the opposing train seat for an all night trip out of Italy where I had to sleep sitting next to a creepy man.

They went on the Sound of Music Tour in Salzburg. 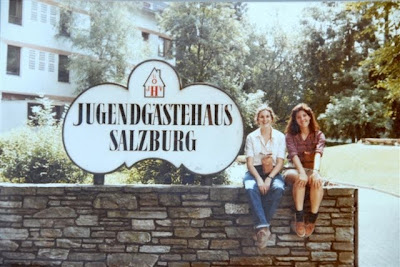 They were on my feet when I hitchhiked for the first (and next-to-the-last) time outside the tiny town of Carnforth, England.

Once home, they hiked me up Camelback Mountain a few times and they went with me to Singles Retreats in the mountains. I took photos of my boots stretched out in grassy meadows or overlooking mountain views. 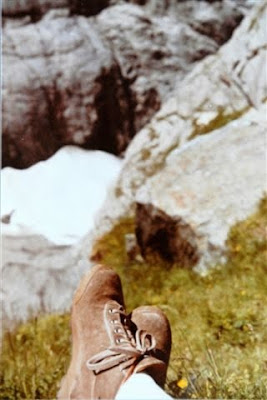 Those boots built our house here in the woods. I was a carpenter in those boots, hauling floor joists through the trees, nailing down sheets of OSB, caulking this, assisting with that. They began to fail me during the cabin construction. The edging came apart and I developed splits in the soles where the ball of my foot created a bend with every step. I did my best to repair my beloved boots. More than once I used Liquid Nails on the sides and white caulking on the bottom.

Finally, with the house mostly done (it's still mostly done) and me having to go to work in town, I didn't wear them much anymore. The time came when I had to retire the boots. I tied them together and hung them up on a basement wall. They stayed there for years. I couldn't part with them.

I even considered donating them to a "boot fence" I'd noticed along the highway going into town. I'm sure it was just one family's little monument to their old shoes but I did consider immortalizing my beloved boots by adding to their collection. I planned out what I would write inside them: about Europe, the Alps, and building the house. I never did it.

One day I was determined to be "ruthless" with myself and admit that I would never wear them again and that there was simply no good reason to keep them. With a bit of sadness and a touch of thanks, I put them in the trash bag and never saw them again.

A short time later I was shopping for flowers to fill a totally cute, old, weathered, wooden-chair-planter my friend had given me the previous year. And it hit me: the PERFECT use for my old special boots! Seal up the insides and plant flowers in them! I could've hung them off the corner of my cute weathered chair on the porch!

AAAARRRRGGGGH! I kept those things for years. I'm talkin' YEARS! And within a month of reluctantly and bravely throwing them out I came up with this cute and brilliant idea. Double aaaaarrrrrggggghhhhh!

I am sad to this day that I don't have those old boots. My next pair of boots just didn't have the right design for it; they were too "trendy". Now, it will be awhile till I retire my current boots and can fulfill this most perfect use for them after their demise. But it won't be the same. It will just be a pair of boots. It won't be my first boots, my most special boots, the boots that took me to Europe and built a house.
Here's some links to stuff mentioned in this post:
C.S. Lewis'
in Oxford
L'Abri
Francis Schaeffer
Alps of Switzerland
St. Michael, Austria
Sound of Music tour
Salzburg
Camelback Mountain
Posted by Judi at 8:00 AM