Okey Dokey. I just read my friend Linda's post and realized I completely forgot to write about what fun we had last Thursday night in Tempe.
The Pioneer Woman, Ree Drummond, just published a cook book. 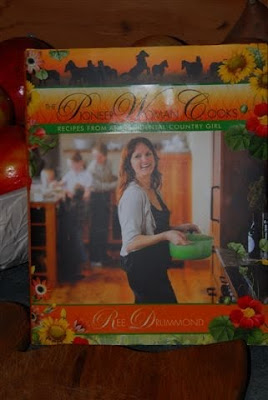 Ree is a city girl who turned ranch wife when she fell madly in love with "Marlboro Man". They married and have four kids she home schools. I love her blog. She posts lots of photos about ranch life, her funny basset hound Charlie, cooking, photography, and home schooling. She is a funny writer and has thousands of fans. She gets hundreds and hundreds of comments to every post. This blogging phenomenon is really quite something. In the 2009 "Bloggies", the academy awards of the blogging world (yes, I have learned there actually is such a thing) her blog won Best Photography, Best Designed, and Weblog of the Year.
Anyway... I just happened to be in the valley AND just happened to have with me my cookbook which just happened to have newly arrived when I stopped at the P.O. Box on the way out of town, AND I just happened to check the book tour schedule the very day she was scheduled to be in Tempe.

Phone calls were placed. Plans were made. Silly excitement mounted. With cookbooks in hand, Linda, Cheri and I arrived 30 minutes early to Changing Hands Bookstore in Tempe. We discovered a standing room only crowd of over 300 people. The bookstore was totally surprised at how many people showed up. One employee said she thought it was a bigger turnout than when Jimmy Carter had his recent book signing. Hm. What does that say? I don't know but I do know it's pretty amazing that a blogger has become famous like she has. You can just check out her post about this first leg of her book tour (here) and get a taste of how popular she is. She notes with amazement and thanks to her fans that today her cookbook hit #1 on the New York Times Bestsellers List.


Since I left my camera at home in the mountains, I was unprepared for the event. You'll have to check out Linda's blog for photos of the evening. Just, please... ignore the horrific photo of the woman on the left.


Ree was travelling with her sister-in-law, Missy (Pesky Tim's wife) and her mother-in-law, Nan. They called it "The Griswald Family Book Tour", as well as "Thelma, Louise, and Their Mother-in-Law." Ree did a Q & A for about 30 minutes and then began the book signing. Having bought our books elsewhere we were given the bad news by bookstore staff that we would be last to get our books signed. We left for awhile and came back just before the official closing time of the store to see how things stood. They expected Ree to be signing books till 1:00 a.m. Yikes.

We decided to leave our books for her to sign and we'd pick them up later. In the meantime, we decided it would also be fun to get the autographs of Missy... 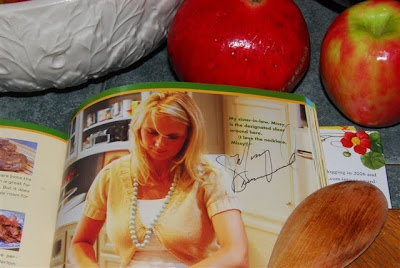 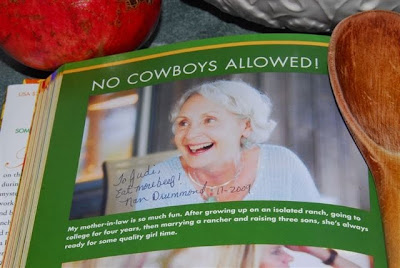 We didn't get to meet Ree, or talk with her, or get our pictures taken with her like we'd hoped. But we did get our cookbooks signed by her. 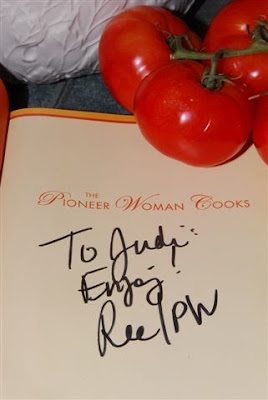