All Talk No Action

It's a blustery day today. 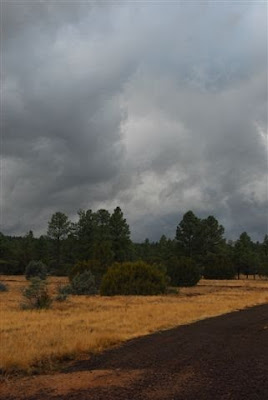 It's been talking a big talk all day long but hasn't proven anything. It sprinkled icy sprinkles for about 15 minutes this morning and that's about all. We have hopes of snow tonight. My husband just called from town and said it's raining buckets there. We're hoping it will come our way.


You see, we need water. We live completely off the grid and collect our water from the rain and snow melt. We didn't accumulate much over the summer because our gutters and downspouts were much more clogged than they first let on to us. They spent the summer mostly overflowing rather than flowing into our tanks.


Speaking of tanks, I thought you might want to see what I'm talking about. 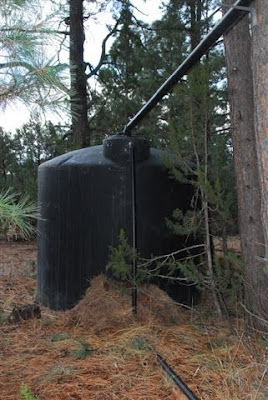 We started out with just the underground one, and lived off it for many years. Just last year we added the above ground tank to help boost us along through the dry seasons.

We get water into the house by way of a pump in the underground cistern. Water is pumped into a pressurizing tank in our basement and from there it feeds the house. The pressurized tank only holds so much. We pressurize it to 55psi which produces about the same water pressure as city water, I think. When that tank is empty we have to go down to the basement and pump water into it again. This isn't as bad as it sounds. The only time it's a problem is when we're using a lot of electricity. Since we don't want to overload our solar system, we generally turn everything else off before we pump water. Sometimes it's an inconvenience when we're in the middle of a TV show or on the computer or something. But we're pretty used to it.

We recently drained what water we had in the above ground tank into the underground one for use in the house. There is so little water left in the above ground one that we're concerned about it freezing. You can see that my husband has insulated the spigot and hose connection for the winter, so at least the components won't freeze. He wrapped the whole thing in insulation, covered it with pine needles, and then placed a board over top of it to keep fresh snow off of it.

We'd really like to get a nice steady rain to fill our tanks. But since I began writing this post, that massive rain storm in town has not made any sign of appearing over top of us. Bummer.
Posted by Judi at 4:43 PM