Today I went to a lecture and open house conducted by a wolf sanctuary in nearby New Mexico. The sanctuary director brought an Arctic Wolf with him, a new and young ambassador for the wolf species. 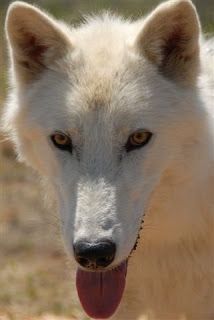 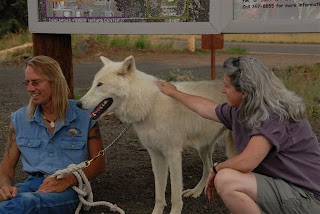 I enjoyed petting him throughout the day, and even got a arm full of that wet nose at one point. This was the best photo I could get, though. It was at the end of the day and nearing my last chance to have someone take a picture. There were crowds and crowds of people all day long. They recorded over 600 people who signed the guest register. All day long he had a crowd of people, mostly children, around him. At this particular point, most people had gone and the Sanctuary crew was beginning to tear down the tents and merchandise tables. He was rather nervous and I didn't want to crowd him; based on current indicators he was likely to move away if I got any closer. I figured a mediocre picture was better than no picture. Barely.

Check out these feet. 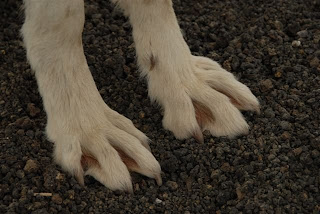 I wish I had my foot in there as reference, but you can look closer at the photo above and see his back foot. His toes spread out to a space about 4 inches across. They looked disproportionately large for his body, which was pretty big. Wolves have a unique stance. Their back legs spread out wider than domestic dogs, so says Mr. Director. I also noticed what seemed to me a greater angle at which the the foot rises to the ankle on the back legs.

Wolves are naturally very uncomfortable and nervous around humans. It takes lots of exposure and several years for a wolf to settle in to his role as ambassador. This guy is on his way to being a great ambassador for his kind.

His purpose is to travel the area meeting people and, accompanied by his handler's lecture and casual conversations, dispel two myths: that wolves are ferocious killers dangerous to humans, and that, hey! wouldn't they make a cool pet! Their sanctuary, Wild Spirit Wolf Sanctuary, exists to "to educate the public, to rescue abused and abandoned captive-bred wolves and wolf-dogs and to provide our residents with permanent, safe Sanctuary."

These little girls seemed to have a very calming affect on this wolf. They were gentle and he let them caress his back, head and ears. 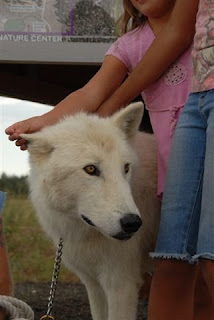 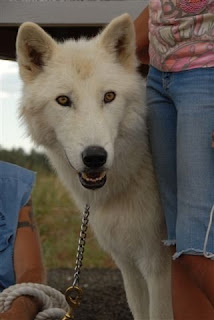 The little girl in front was so calm, quiet and loving. She seemed to connect with him. The second little girl was equally quiet and gentle, stroking his back during this picture, but I deliberately cut her out of the frame because this image was so sweet. There just seemed to be something special going on between this wolf and these two little girls.

We hope to visit the sanctuary sometime in the coming months. They have a photographer's tour designed to enable quality photos without a fence in the way. I am learning that, because wolves are so skittish around humans, it is VERY difficult to get a photo of them in the wild, nearly impossible. It's actually common for photographers to visit such sanctuaries in order to get their pictures. All those amazing wolf photos you see? A lot of them are taken in such places. When I first learned of the idea, it felt like cheating. Now that I know most photographers do it, well, it still feels a little like cheating but it feels like "acceptable" cheating. I think other wildlife photos are captured under similar conditions. Not all. But some. Trying to take photos of this one today was pretty difficult as he kept nervously moving, always aware of his surroundings, easily feeling trapped, looking away, skittish and elusive. I was very happy to get the few good pics that I did today, in very rare moments where he was not surrounded by people. 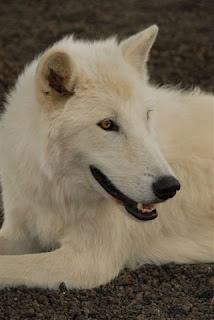 I'm coming to agree that, in the end, it doesn't really matter that much if photos are taken in a captive setting. These animals are still wild (one of the director's main points). It still takes the same skill to take the picture. You just are ABLE to take the picture. The point is to capture an image of a wild and beautiful creature. Getting photos out there is important because, as Steve Irwin was known to say, if you get a person to love a creature, you'll get a person to want to protect that creature. 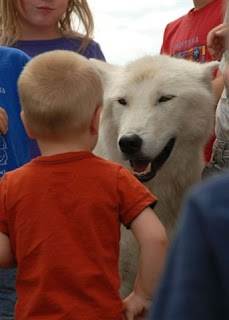 There were times in the day when his handler could read that the wolf felt trapped. The handler was constantly aware of when children needed to move back or to one side or another of the wolf. This was a moment when everything seemed cool to encircle him. I think there are several little girls and boys who began to love wolves today.

It was a pretty darn neat day for this canine lover.
Posted by Judi at 5:36 PM