The first clear day I've seen all summer on the Denali Cam. 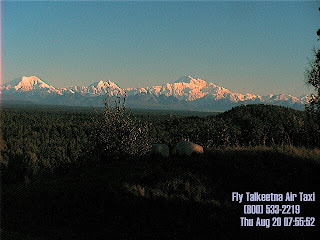 Mt. McKinley (Denali) doesn't look very big from this far away, but up close, it's pretty impressive at 20,320 feet. The other peaks, Mt. Hunter and Mt. Foraker, stand at 14,573 and 17,400 feet respectively...and right now I can't remember which one is which. As you can see, the perspective of the photo doesn't reveal the 3000+ foot advantage of one over the other.

I had a busy day in the valley yesterday. Left the house at 6:15am and headed straight to the photo lab to place an order. I could have placed in online the day before and saved some time but then I wouldn't have been able to use The Blessed Coupon they gave me last time I was in. It was for 30% off so it was worth it. I also got nearly 20% off because of this membership card we have. And then, I FINALLY remembered that I can take our business license in and from now on not pay sales tax since we're buying for resale! So I saved over 50% in all. Definitely worth the drive down to Phx. I also had a small order to pick up and another lab (had a coupon for a free 5x7...which come to think of it, I don't think I received), some matboards to pick up (saving us $35 in UPS fees), and some mat cutter blades to get (saving about $7 in shipping). So, I spent about $35 in gas and a full day but it saved us hundreds. Not to mention several days in shipping. Days, at this point in my festival preparations, are just about as valuable as dollars. So I'm very satisfied with yesterday's accomplishments.

And I even managed to round up some of my girlfriends for a quick but very nice lunch together at AJ's. So nice to be with my dear friends.

I intended to leave Phoenix by 3:00 or 4:00 pm ("at the very latest", I said over and over to myself and everyone else). I just didn't want to get home after dark. Well, that didn't work. I started out all wrong for that scenario to actually happen. First, my plan to arrive at the first photo lab at 9am was shot when I didn't get to bed the night before until 10:45. So instead of LEAVING at 5am, I set the alarm for 5am. Which meant I "snoozed" until 5:30 and didn't leave the house till 6:15. Then it was a breakfast and coke stop - I needed the caffeine - then later a potty stop. (Huh, go figure.) I got to the lab at about 10:30. So much for placing my order and making two more stops before hoping to call the girls for lunch at 11:30. Ended up pushing off the remaining morning errands and met the girls around Noon. I let go of the notion of getting home before dark. Finished all the errands and hit the Loop 202 in Tempe at 4:55pm. OK, so I'll get home at 9:00.

And then I saw it. I'd been wanting to go check it out for well over a year. It was just on the wrong side of town and too far away. I'd driven past it a couple times on my way out of town but never even saw it. Until yesterday when I went whizzing past it on the Loop 202, just a couple minutes before my exit to head north. The split second sight of it hit me like a sudden gust of wind hitting my face. It grabbed my attention as spontaneity presented me with an invitation. There it is! Finally!

There it is. The Bass Pro Shop. Woooooo. I decided on the spot I was going to go. I knew it would be just like Cabela's (which I love), like stepping into the wilderness only with lots of cool shopping scattered among the "rocks" and "trees" and "animals" and water. I had a nice time wandering around the nearly empty store, looking at all the animals, rustic displays, and the neat merchandise. They have some beautiful women's clothing at The Bass Pro Shop. I mean, some beautiful things. I saw a couple really nice button-up shirts and some special sweaters among the ordinary outdoor apparel items. I also fell in love with a liquid silver watch for $130. Maybe I'll try to make one someday.

So, I really left town at 6:15pm. Got home at 9:45pm. I stopped on "our road" for a moment. (You see, there's The Big Road, Our Road, Our Driveway Road, and Our Driveway. One must distinguish all these unnamed stretches of gravel which one travels to get to one's door. - However, The Big Road does have a real name, which I actually use sometimes.) The moonless sky was so full of stars I simply had to stop and get out of the car and look up. I stopped at the meadow just one property to the east of us. I got out of the car and turned the headlights off. Millions of stars! The Milky Way divided the sky in half east and west. It was a massively long streak of star-filled haziness traversing the whole sky. I looked south to the meadow, and then I looked up, up, up over my head, and then to the north. It was breathtaking. I wish I'd had the courage to stay out there longer in the dark with that blanket of diamonds overhead, but I quickly chickened out. Oh, how much fear has robbed me of in my life. But seriously, though, I kept envisioning some giant elk suddenly appearing 10 feet from me in the dark black air between me and the meadow in which they often graze at night. Must have had something to do with the elk on display at Bass Pro. One was positioned parallel to the fencing they were all behind and it's face was positioned so you could stand right in front of it and look it in the eye just as if you were encountering it in the wild.