Guess where I was this weekend!

I was gettin' my kicks 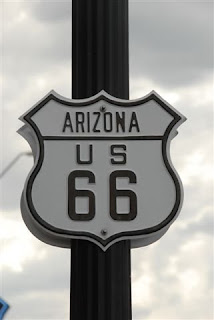 It's always hard to get away for a girls' weekend. The five of us can never seem to get away at the same time. This time we had 4/5 of us. And instead of a Girls' Weekend it was a Girls' Sunday-Monday-Tuesday. We had a wonderful time at our friend, Sherri's, cabin in Williams.

To get to Williams, I had to go through Holbrook. Beautiful downtown Holbrook. I passed the corny Wigwam Motel and decided it was worthy of a turn-around and a photo. Have YOU slept in a wigwam lately? 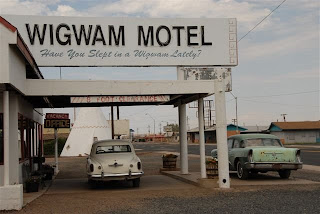 It was a turquoise car in front of a "teepee" that made me turn around. 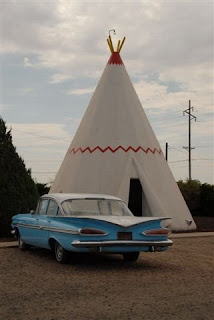 They actually had several old (or outright junker) cars parked in front of the "rooms" as part of the nostalgic re-enactment. 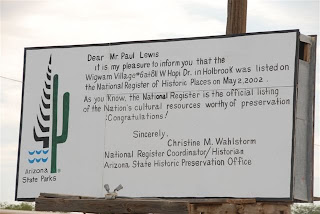 After reading this sign, I realized with new appreciation that I was on the famous Route 66. I also realized I would be in Flagstaff and Williams on this trip, too, and that they, too, are Route 66 towns. I felt a blog post coming on. I had a lot of fun looking for photo-worthy scenes along the way.

Holbrook is not a very hip or happenin' town. (I would say that's a massive understatement.) It feels kind of like a 1950's ghost town complete with a Sinclair dinasaur and well, a teepee motel. Here's another Holbrook attraction: 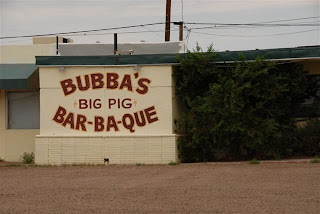 Once back on I-40, running fairly parallel to Route 66, I stopped at some really interesting rock striations along the highway. The stone and earth were very crumbly, like sandstone. 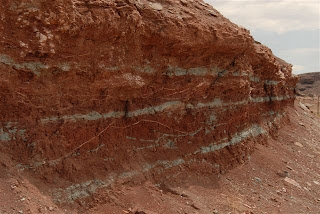 The cool green veins looked and kind of felt like dry clay. The white made me think of quartz but it, too, was pretty crumbly. 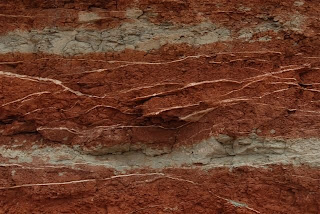 I picked up a couple small pieces and two big pieces to take home. Did I tell you yet that I love rocks? The small ones will go on our rock sill and the big ones will go in the "yard". I'm wondering if they will melt away into a pile of mud if rained on.

I had planned to leave early and stop off in Flagstaff to visit the downtown shops and art galleries. I love the gallery shops there. They have glasswork, jewelry, paintings, clay, and other interesting things. Lori drove up with Jance and her husband who had some brief business to do there. We met up (after a grumbly convoluted escapade with the cursed one-way streets) and Lori and I took off for the shops across the street/highway/Route 66. There were lots of pictures I could have taken along Flagstaff's Route 66, San Francisco Ave., like the railroad station, the historic buildings and such along the street, but time was running short. We spent most of our time a block or so up from Route 66 and here's some of what we saw. 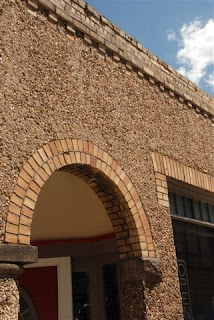 I just love the detail of old buildings. Today's architectural detail is so different. I am really drawn to the details of old and the natural materials they used. 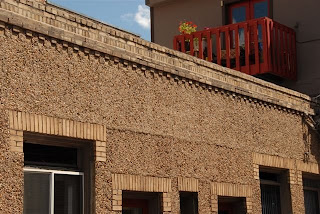 We loved this sign and the metal branches that it hangs from. 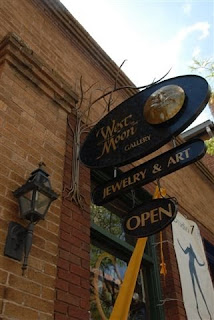 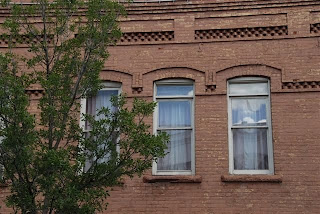 (Anyone seen Jerry or George? Elaine or Kramer?) 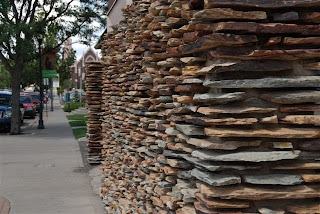 I am a real textural person. I love lots of texture and surface depth. Like this textured stone work. I also really like the stone church in the background, too, even though it was rather pink. We didn't get very close to the church but something about it made me think it was more of a natural pink than a painted pink. 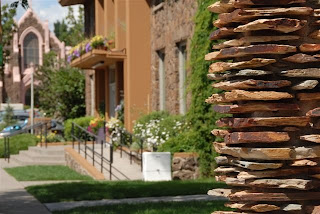 We arrived at Sherri's cabin Sunday afternoon, eventually. Let it be known that Lori and I, when we get together, well ...we can really talk. Now, take that fact, and add in a factor of We Haven't Seen Each Other in Weeks. Multiply it by We Haven't Actually Spent A Good Chunk of Friend-to-Friend Time In Months, throw in a dash of Not Thoroughly Transcribed Directions and a pinch of Not Paying Attention To Them Anyway, and you get .....a little bit lost. Not terribly, but we did manage to pass just about every turn we were supposed to make, including Sherri's driveway, and have to double back. After missing a couple turns, we were finally on track and supposed to take the second of two loop roads with the same name. We saw the road and passed it, looking for the second one. But then I said, "I HOPE that was the first road." We laughed and made fun of ourselves thinking "what if we did it again and passsed the first road without even seeing it?!" It would be unbelievable at that point.
You guessed it. We drove for about half a mile, never seeing a second loop road. We ended up in a dead end where we had to turn around AGAIN. The road we had seen was already the second road of the loop where we were supposed to turn. Then, we made the correct turn, kept on laughing at ourselves and drove right past Sherri's house for a long ways before we said, "Uh oh! Where's her house supposed to be?" We ended up driving ALL the way around the Loop right behind her property and emerging onto the main road from the FIRST Loop Road. Well, we quickly got to make the proper turn onto the SECOND Loop Road and realized the directions said her house was the second on the right. We were laughing so hard our stomachs hurt by the time we finally found ourselves in front of her cabin (for the second time). Sherri just happened to call my cell phone right at that moment. I answered by saying, "Do you see us driving around and around?"

What started out with a Lucy and Ethel escapade (we've had those before) turned into a wonderful relaxing time with dear friends. The cabin and setting was beautiful. Best of all was being with each other and having time to play" together, talk and reconnect. Sherri served us all weekend with wonderful meals she loves preparing. We ate dinner on the deck surrounded by 60 foot tall Ponderosa Pines with big ole tall trunks where the branches didn't start until about 30 feet up. I love that kind of forest.

It was a great time. Relaxing mornings. Beautiful views. Breezes through the pine needles. Teryx rides around the dirt road neighborhood. Walks. Talks. Reconnecting and catching up. Dinners on the deck. Cool evenings. Open windows. A nearly full moon. Going "into town" to visit the Quilt Mercantile. Seeing all the Route 66 nostalgia and tourist stuff on the main street. 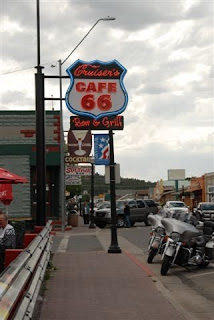 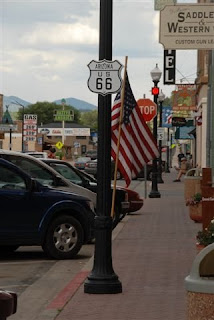 ...Stopping for a drink and sitting outside a nice little coffee shop. 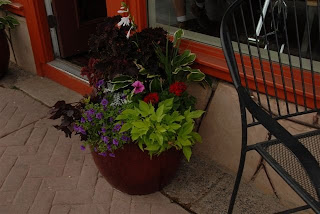 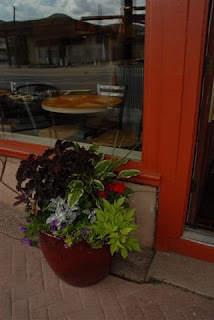 The coffee shop we stopped at had these interesting stools. Grey metal welded together with brass solder. This was the second time I'd seen this pairing and mixing of metals 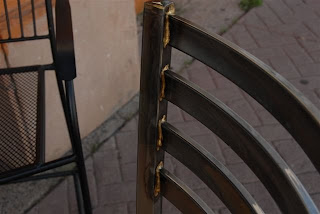 I really liked how the designer took a functional element that is always deliberately disquised - the weld - and intentionally made it design element of focus by using a different metal to weld with. In Flagstaff we had seen some glass jewelry cases that had brushed steel framing on the edges of the glass but the hardware and solder was all in brass. 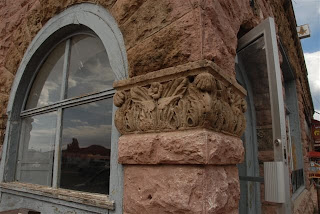 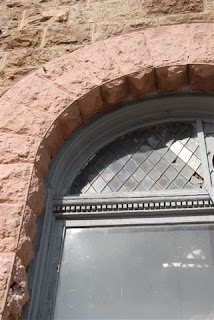 ...And elk spotting at night.

Elk spotting. Man, that was fun. The community's developer has a large parcel of land that includes a meadow and watering hole. The road into the neighborhood goes right through his meadow. Every night about 50 elk and deer come from the woods and graze for hours in the meadow. It was awesome! There was even a big bull elk with a huge mature rack. Lots of mamas and babies, too. And the deer...they were so sweet with their dainty bodies and faces, and their big ears. It was way too dark to get photos, but I sure wish I could show you what we saw. It was beautiful, exciting, amazing, and so much fun. We also saw a grey fox and a skunk.

There are selected moments of our time out there by the meadow that are emblazened in my memory. Like when we saw the bull for the first time. And the cow elk walking into the watering hole and hearing her splashes. And the whispered hysterical laughter that erupted in the van when I spontaneously and unnanounced let out my amatueur female elk call. (Yeh, but when the elk called back to me, I was asked to do it again.It was so fun hearing them call back. That's me, providingt entertainment on multiple levels. Actually that's NOT me. I'm usually too shy to do my elk call in front of anybody but it just came out.) But I think my favorite memory of our wildlife "shining" time was the deer bedded down for the night, just off the road and slightly uphill. Our headlights shined on her and she just calmly stared back at us, not moving at all. Since we made a circle on that road, we got to see her twice. She was so beautiful, so peaceful, so graceful. Mmmmm, what a gift.

The whole time was a gift. My friends are such gifts. Getting away with them was so good. 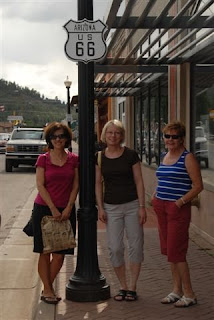