Five or six years ago, about 6 days before we went to Phoenix for Christmas break, we began having a nightly visitor. A little masked bandit began climbing the tree outside our dining room window trying to get at our bird feeder. As you've seen with our cats, The Fisherman's great at naming critters. When I asked what we should call him, he said, "Steve." So, he was Steve. He came every night for six nights but then we went to the valley and were gone for over a week. We didn't see our new friend, Steve, the rest of the winter.

The next winter, lo and behold, there came a racoon. I excitedly told The Fisherman, "Steve's back!"

"I don't. It doesn't matter. They're all Steve! Any racoon that comes to us is gonna be Steve!"

So, we had a Steve. And we began to feed our Steve. We'd put cat or dog food out on the porch to see if he'd come up and eat. Sure enough he did. Every night. It was so fun. I loved Steve.

Each night I'd go out onto the porch and shake the cup of food so he'd hear it from wherever he was hiding in the night. I'd spread it down on the door mat we moved out into the middle of the porch for his placemat. I'd say to the dark, "Here's some food for you, Stevie Steve." Then I'd go back inside and go about my business. When I'd hear him though, I'd slip to the door and open it an inch or two to peer out at him. As he would start to scurry away down the steps, I'd say in a sing-songy, lilting voice, "It's o-kay." Pretty soon, he began coming back. Eventually he let me be out there with him while he ate just five or so feet away. If he got scared, I'd just sing my little "It's O-kay" song and he'd come right back and begin eating again.

He would never take his eyes off me, though, and would blindly reach for pieces of food with his paws. It was so fun to watch him. And to listen to him. Boy are they noisy eaters. Dog and cat food puts out a mean crunch when eaten by a racoon. And grapes? Well! Let me tell you, racoons do NOT have good manners when it comes to smacking their food! It's the loudest, funniest thing.

One time, I decided to give him a dog biscuit because I was running low on dog food. He had grown so comfortable with me, I decided to see how close he would come if I held it out to him in my hand. It was one of those giant dog biscuits about 4-5 inches long. I took hold of one end and held it out. He crept closer, sniffing. As he reached the bisquit, he sniffed it, paused, and then instead of stopping and trying to take it, his gentle, sniffing nose went the extra 3 inches and actually touched my finger. Then he pulled back. I was thrilled. It was so exciting and so cute. I broke the bisquit up and tossed it on his placemat and let him eat in peace.

NOW, however, I realize what a stupid move that was of me. I knew racoons could have rabies, but I always thought, "Well, he's not foaming at the mouth and he doesn't show any signs of rabies, so he doesn't have it." Wrong. That's a wrong assumption to make. I found out an animal can be only a carrier of rabies and therefore doesn't have to be inflicted with it or show any symptoms of it themselves to pass it on. I'm much more leary now. As cute as they may be, they ARE still wild you knuckle head!

When The Fisherman's Mom moved next door to us, she joined in with the Steve feedings. Then, I moved to Phoenix to take care of my Mom. The Fisherman's Mom (Mom V.) took over completely and would call me sometimes when she'd see him. One night she called and informed me that Steve appeared in her front yard with HER three babies! Our little Steve was a girl. And a Mama at that! For Mom V., Steve became exculsively Stevie, as if short for Stephanie. I still say Steve, and if I say Stevie, it's as in Little Steve. It took me a long time to switch from saying "he" to "she" and it's still natural to think along the lines of he and him.

Oh, yes. Steve is still around. I was a bit concerned because Mom V. moved away last October. By then, with all the babies over the years, I'd realized it was not right to feed them. She was teaching her babies to eat from us and perhaps NOT teaching them to forage. I thought they might all be in trouble with no one feeding them. I thought they'd be gone forever. Every now and then, though, Steve would show up for The Fisherman. And every now and then he'd put some food out for her.

Now that I'm back living up here full time? "Well," she says, hanging her head, with her hands behind her back, and tracing her toes on the floor, "I, uh...well, I uh...still sorta...feed her. Sorta every night." I'M SO BAD! I just can't resist. I just don't want to resist. But I really should stop. The other night somebody - we have a second adult now - came by with FOUR babies. AND growled at me from about 10 feet away. I didn't see the babies hanging around under the tree and was so puzzled why this otherwise meek racoon was suddenly growling at me. When the babies started noisily clawing their way up the tree trunks, I realized what was going on. I'm thinking this might be one of Steve's babies grown up with babies of her own.

If I don't put food out, they scale the porch post and take swings at the hummingbird feeder. This is what I came home to one night. 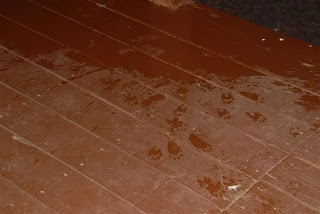 Click on the photos and see how cute the little footprints are. 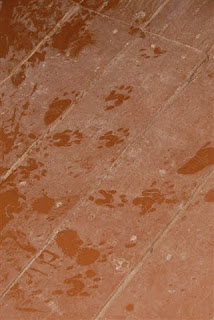 What a mess! I threw a couple buckets of water on the sticky mess and it washed right off. Just like it did the next time it happened. I don't leave the hummingbird feeder out at night anymore. 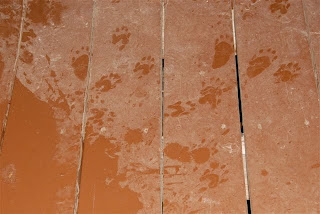 And no, they're not all Steve to me now. There is only one Steve. Trouble is, it's been over three years. I'm having a hard time identifying my Steve. Both of these two adults are more skittish of me than Steve was when I left. That's understandable. I am surprised at how identical racoons look. I've tried to notice anything distinguishing about Steve over the years so I'd know her when I saw her again. But, alas, the only way I really knew her by was the wound on her shoulder which I watched heal and then watched turn into a funny patch of fur for quite a long while. There's no such sign of a fur ailment now. But I do believe one of them is her. One of the two adults has a fatter tail. One of them has a darker head. I'm sure Steve is the one with the greyer head as she's getting older just like I am. They only recently started showing up at the same time so I can do some comparisons.

How can I think one of them is really Steve? There is one that doesn't completely run away when I sing "It's o-kay." There is one that always stops on the stairs and turns back when I say that. I think this is my Stevie. 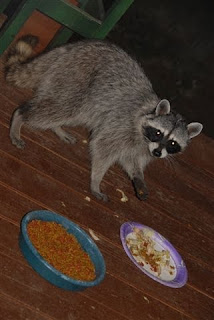 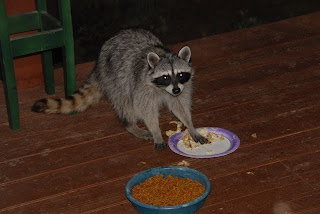 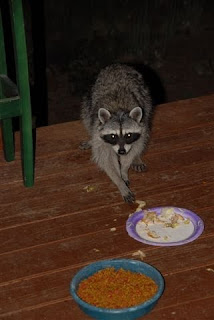