Part of our every spring and fall in Alaska seems to be road work.  Last year, you may recall, we did a bunch of road work.  (Here and here.) Well, The Fisherman did a lot of road work.  I did a lot of watching, encouraging, and large rock removal while he ran the backhoe hour after hour.  We used gravel we found on our own property to build up the road a good 18 inches.
This is the result of last year's efforts. 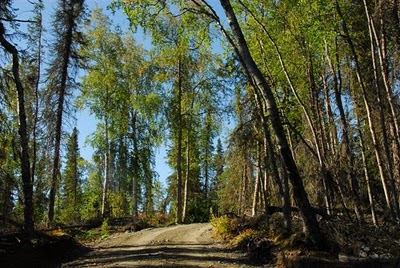 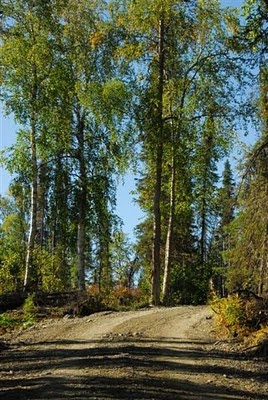 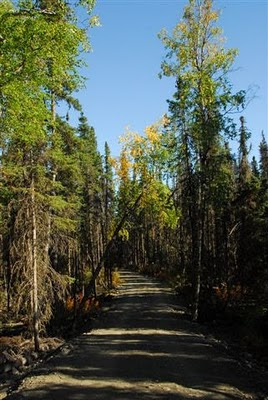 It formed a good base and held up pretty well but it just wasn't quite deep or solid enough. We consulted with a gravel company and learned that our gravel is good for a base but not sufficient for a finished road.  We calculated we'd need almost 20 loads of their Pit Run gravel and were thankful for sunny skies on the scheduled day.  Using the gravel we had was still very much worth it. It saved us about $6000 of having to buy it!  So we're super grateful we have it and were able to create a nice thick base with it.
My first amazement of the day was when we realized the guy was going to BACK his way into our road.  Here he comes now: 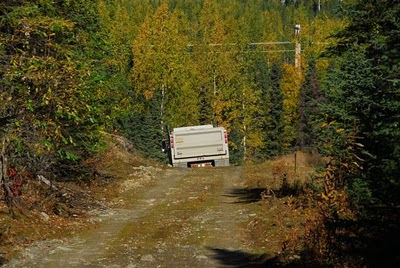 Our road is about 1200 feet long, has several hills and has some curves to boot.  I was pretty impressed that he backed his way all the way to our cabin! 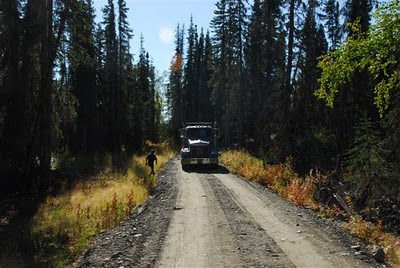 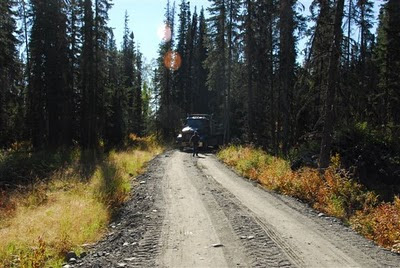 He then opened his back gate and made his way down our road, dumping the load of gravel as he went. 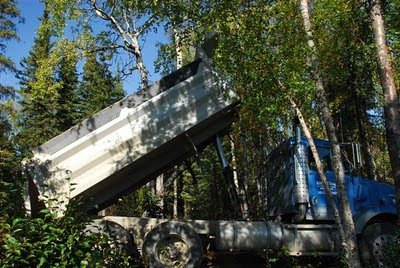 This was not like our Arizona road gravel dumps, which I showed you photos of in this Catch Up post.  We needed about 12 inches of this mixture of sand and rock for this Alaska road.  In some spots, in the valley between two hills, we wanted even more.  The Fisherman has done a lot of work cutting down the highs and filling in the lows, thus making the hills less severe.  We wanted to continue those efforts and improve things even more.  So, with the standard 12" in most spots and deeper dumps in other spots, the road was a mess for awhile, downright impassable, during the dumping hours.  We couldn't have gotten out if we'd wanted to, the truck being parked up at the cabin. 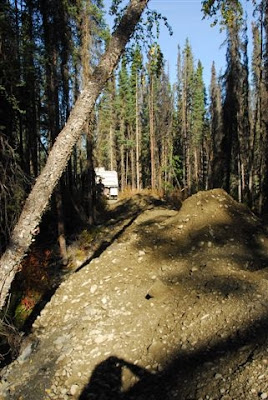 BJ was our Backhoe Wonder Man.  Once he got some reinforcement, in the form of another driver bringing truckloads of gravel from the pit, BJ set about really impressing us with his skill on the backhoe.  He took to all that dirt and pushed and dragged it all around so efficiently and quickly, it soon started looking like a road again.  He did a perfect job.  Perfect.  He was so quick, so skilled, it was fun to watch.  The Fisherman learned a lot from him...for the next go round of base work on the remaining half of our road we haven't worked on yet.
Here's BJ taking a break talking with The Fisherman at the end of our road by the cabin.  He even did us a favor by running over a cleared section that had some young alder shoots growing a couple feet high.  A couple passes of the backhoe tracks and a couple scrapes of the scoop, and those babies were outta there! The whole area to the right and beyond out of the photo was getting thick with young alder shoots.  We needed to take care of it this year before they got too big and strong to mess with.  BJ helped us out a lot. 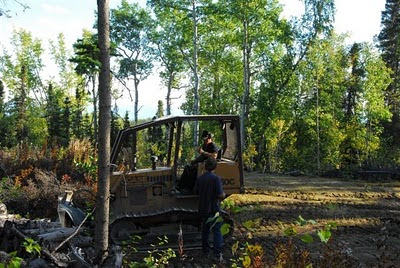 I can't believe I didn't take any photos of the finished work!  Duh.   But after BJ had pushed and dragged the road so beautifully even and wide, just before the last truck full of gravel dumped its load, he got into the dump truck and wheel packed the road he'd spread.  We thought he'd make one or two passes and that we'd have a soft spot high in the middle.  No.  BJ backed the truck up the hill to the cabin and drove it down again several times, carefully and precisely covering nearly every inch of the width of the road.  We were so happy!  And very impressed.
Next year I'll get you some pictures of the finished road.  We learned that an important part of the setting up of a new road is the winter.  The snow and cold of winter play a part in setting up the road and making it stronger for the spring.  We're looking forward to seeing it next summer and seeing how the winter continued the Eternal Road Work.
Posted by Judi at 6:49 AM