I can't believe we've been home two weeks already!  I'm happy that I've finally gotten settled enough to put my photos in the computer and at least begin working on getting them ready for blog posts.

So here's the first post on my month in Alaska.

I had a cloudy flight into Anchorage.  Not the usual spectacular views of ocean and snow capped mountain ranges with glacier lakes.  I couldn't see the ground at all until we were only a couple hundred feet above it.  The Fisherman was there to greet me and it was so good to see him!  I got in around 9pm on Saturday night, August 28th.

The first thing we did the next day was visit the sled dog kennel of Iditarod champion, Martin Buser. 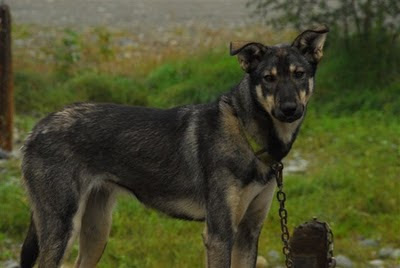 His kennel is in Big Lake, about 50 miles north of Anchorage. His summer tour season was one week away from closing down and we were the only ones who showed up for a tour that Sunday, thus we got ourselves a private tour! His handler, Magnus (from Sweden, I believe) met us in the "dog yard" and started the tour for us. He led us to the Trophy Room where some of Martin's many trophies were on display. Next we went into The Garage and watched a movie about sled dogs, the Iditarod, and Martin's life and achievements. He is a Swiss immigrant who moved to Alaska when sled dog racing became his passion. He is now a citizen of the U.S. and I think probably holds the record for the longest naturalization swearing-in ceremony. It was begun at the opening of the Iditarod race in 2002 and ended just under 9 days later when Martin crossed "under the burled arch" to win the race and break the Iditarod record for the fastest time.

I love the name of this dog (below), Drop Zone. He was so named because someone just dropped him off as a young dog a couple years ago.  Martin raised him and he's now part of the kennel along with about 70 others. 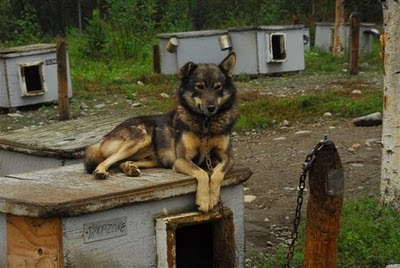 At the end of the movie, Martin Buser himself came in and we shook hands and introduced ourselves.  What a treat it was to get a private tour and be able to have easy conversation with him.  He has been one of my favorite mushers because of his happy personality, good attitude, his tender way with his dogs and the great care he gives them.


We walked outside where Martin (in the orange shirt) and Magnus hooked up a small team of dogs for a demonstration around the property. 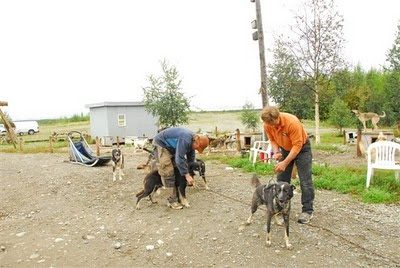 The following are terrible photos, blurry because I didn't have my shutter speed set fast enough to stop the action of the dogs.  But I wanted to include them to show how excited the dogs get when they're getting ready to go.  This guy (gal?) was bearing down, lunging into the harness, so excited waiting for the command to go. 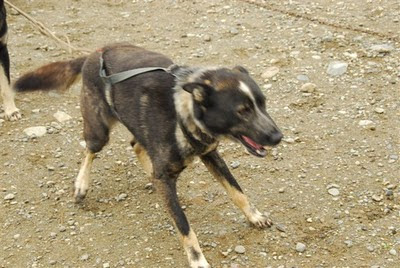 And all of them were barking their heads off with excitement. 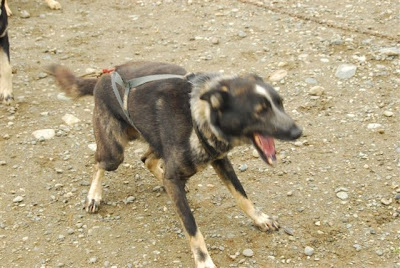 It was a chaotic, loud, crazy cacophony of barking howling dogs!  It went on, and on, and on.  It was so loud and wild, and went on for so long that all I could do was laugh.
This was just before he gave the command to "Hike!"  When he did, all the noise abruptly stopped and the dogs leaned into their harnesses and got down to the business they so eagerly awaited. 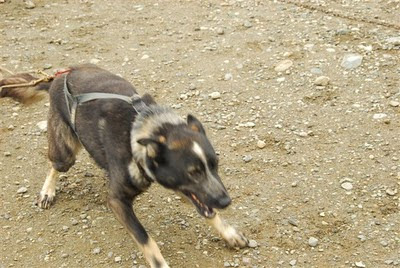 Here they are coming in for a stop after a short loop around the property.  It was about 55 degrees outside - a heatwave in sled dog terms - so the dogs aren't trained in earnest during the summer.  They are kept fit, but not trained. 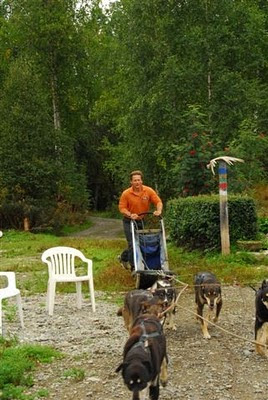 Among many things Martin Buser is known for as a musher, he is the musher who has made dog-sized "hamster wheels" for his dogs to run in.  They get in on their own and run just because they love it.


Here's me, being a groupie, with the four-time champ himself. 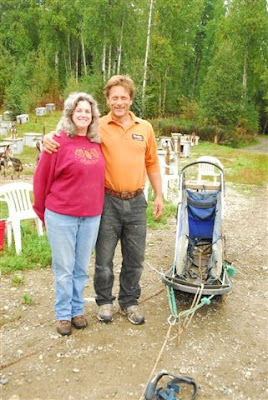 After the demonstration, we went over to another area where a tent was set up, a fire pit, a table with gear on it, and several sleds around it.  There were log benches setup in rows, amphitheater style, for the usual crowds that show up for these tours. There was a dog running around wild, enjoying her moments of freedom, running through the grass all around the tent and table.  Martin called her and she jumped right up on the table.  She came bolting up so fast that she slid right off into him, taking with her the blanket that served as a table cloth.  Her second try was more controlled as she landed right where she needed to be. She stood there patiently serving as a model for Martin to show us all the protective gear the dogs wear in various weather conditions. They have wrist warmers to keep their muscles warm, dog booties to protect their feet from ice and snow buildup. They have tee shirts and jackets to wear when it gets cold (like, really cold), special waist bands for the boys' private parts, and "donuts" of fur to protect that little flap of skin on the dogs' hind legs (where the legs connect to the torso).


We were so fortunate to be the only ones there.  We just stood right at the table, up close, and never sat down for the "show" like we would have had to if we were among dozens of others.


Next came the puppies.  Magnus let loose three six-week old puppies and their mama.  They ran circles of excitement all around us and were so cute.


Here's Magnus, just getting started.  There are about 25 dogs ahead of him, all saying, "Woooooo! Yahoooooo!  Wheee!  WooHooooo!", as they run wildly back and forth along the trail. 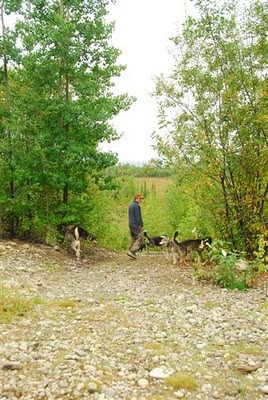 Everybody had to pee on everything.  Everybody had to charge up the trail and back again, over and over.   They plunged into the woods on either side of the trail and popped out further up ahead.  They got into tussles with each other occasionally.  Mostly they just went nuts with their freedom, with all the scents and all the sights.


Always, they came back to Magnus as their anchor point.  This white one especially, who was being treated for a skin infection, stayed close to Magnus, always looking for loves from him whenever he stopped on the trail. 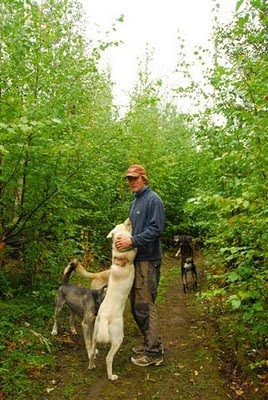 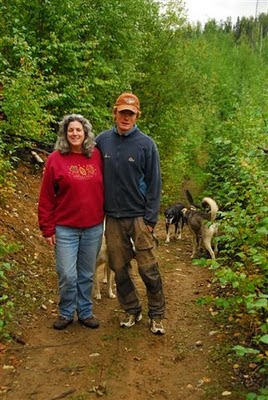 The dogs were running so wildly back and forth, with such excitement and speed, that Magnus cut off alder branches for The Fisherman and me.  He said the dogs can get so focused on a point past us as they're running along the path that they might actually run into us, not even seeing us.  He gave us the leafy branches to shake in front of us if it looked like a dog was going to barrel into us.  It would catch their attention, enabling them to actually see us there in their way.  We never had to use them, though I did get halfway barrelled into from behind once.  Sort of clipped by a speeding bullet running with glee up the path. 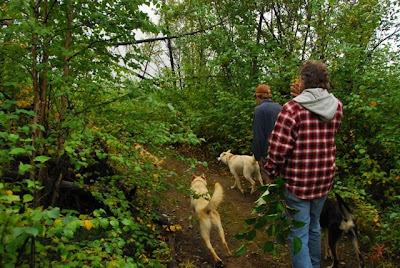 There was one open spot on the walk route.  We didn't linger there long because of a neighbor's float plane parked on the shore of the lake...the dogs were called away from the area of the plane so as not to damage it. 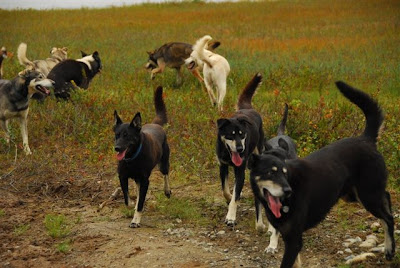 I love these shots of me, taken by The Fisherman.  Me, walking with a bunch of dogs, in the woods.  What could be better? 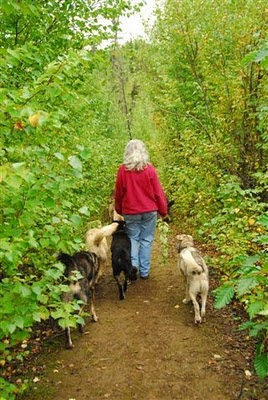 Well...maybe it could be better if the dogs were my own. 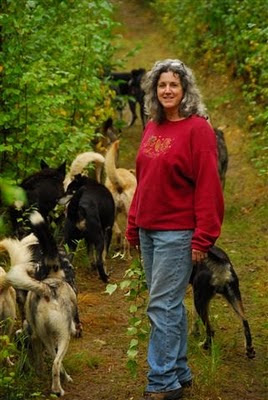 And not so wild and rambunctious... 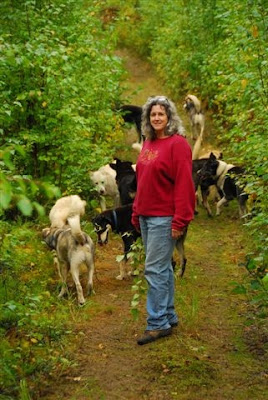 Still, it was pretty fun and pretty cool. 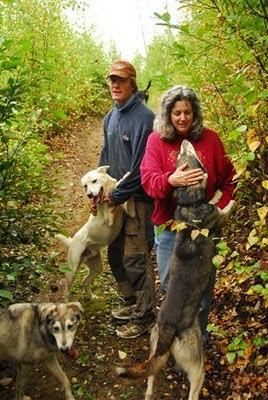 A really special experience for this dog lover. 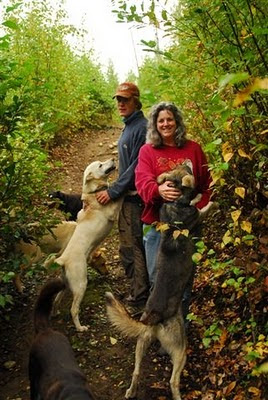 While we were with Magnus and the dogs, Martin stayed back in the dog yard to hook up the dogs as they raced their way back home. They came back to the yard at will and Martin was there to greet them and secure them to their familiar spots. 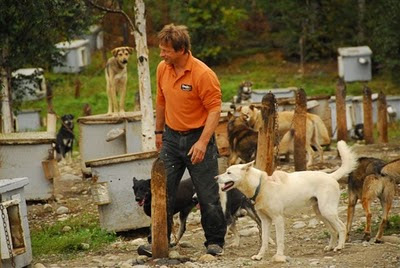 In the end, there were two brothers missing.  Martin was not concerned, stating that they always get into trouble but they always come home.


He hooked up his famous and beautiful Jefferson... 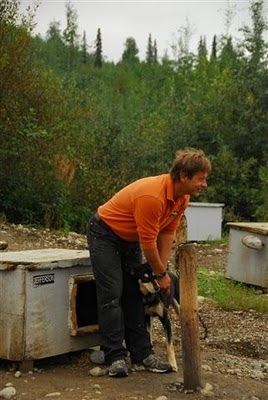 ...and gave him some personal attention and lovin' just like he does to all his dogs. 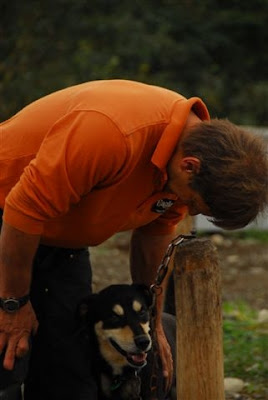 I bought a t-shirt from Martin's Happy Trails Kennel.  It's long sleeved and pink.  I had him sign it on the back, just below where my hair ends.  He wrote "Happy Trails.  Martin Buser"

It was a really fun day. It was so special to have such a casual and intimate setting with this famous, accomplished professional musher.  And what a treat to get to go with the dogs, "the true athletes", on their daily free run.
Posted by Judi at 8:28 PM