We chose the beautiful turquoise waters of Kenai Lake for our boat's maiden voyage. 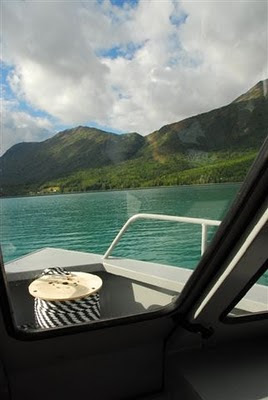 There is a required break-in procedure for a new boat. First we had to drive it at 3500 rpms for one hour. That was a little tedious but it was still nice to be out on the beautiful lake. 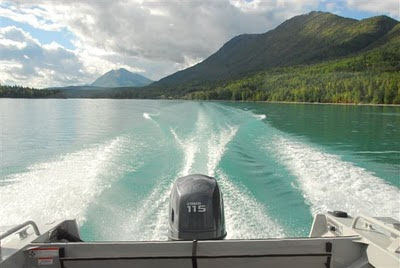 Next was one hour "on step". That's where you increase the speed to the point where the boat sort of lifts up and levels out on top of the water a bit, rather than having the back end dragging through the water. We had to maintain this for one hour as well.
We went back to shore where our friends, Jerry and Kim, were to meet us. 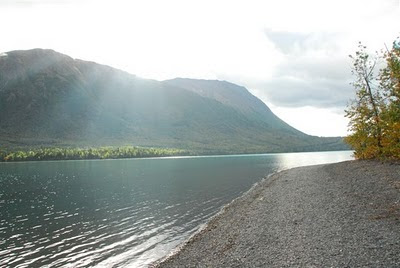 They got on board and we set out to explore other regions of the lake as well as stop to grill up some salmon for dinner. It was about 5pm by now and the earlier breeziness was settling down.  The water grew more still, the sun shone beautifully and we were treated some breathtaking views.  The sky and mountains reflected in the still water was a stunning sight.  We stopped the boat and just took it all in. 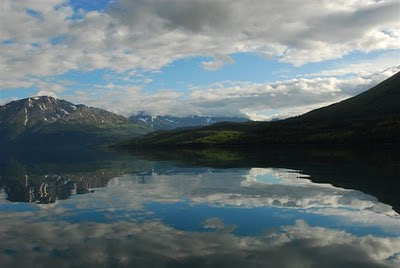 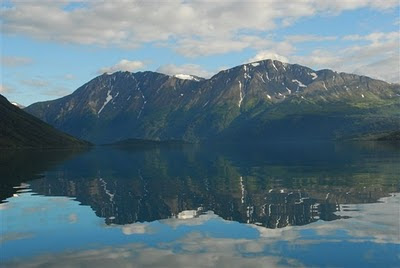 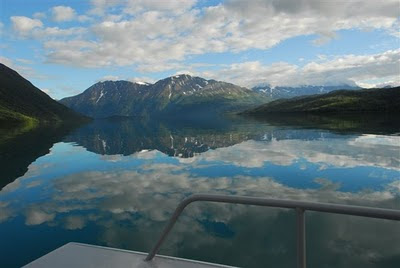 I like getting a bit of the boat in the picture as well.  It gives the photo some perspective; it tells more of the story the photograph has to tell.
We stopped at Porcupine Island for dinner.  The sky was getting grey with both the hour and the clouds.  It was comfortably chilly. 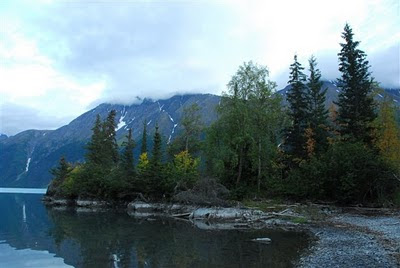 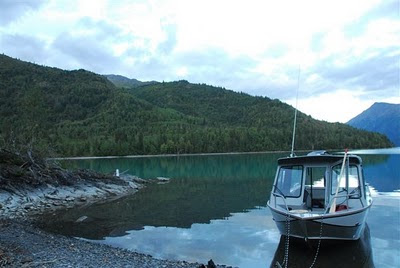 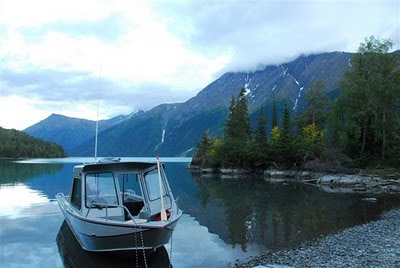 We were all the kitchen crew at one point or another.  We fixed The Fisherman's favorite salmon recipe, an invention of his own he discovered when he tried to remember how a certain restaurant fixed it.  (I'll share the recipe in a later post.)  We also had some rice, mixed vegetables, and toasted French bread. 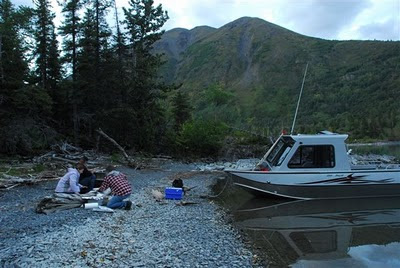 The other thing we did on the island was collect drift wood. I love hunting for driftwood.  I love hunting for any cool pieces of wood.  For rocks.  For seashells.  Leaves.  You name it.  But this was a driftwood haven and we had a blast checking out all the smoothed wood lying onshore.  Here we are with some of our treasures. 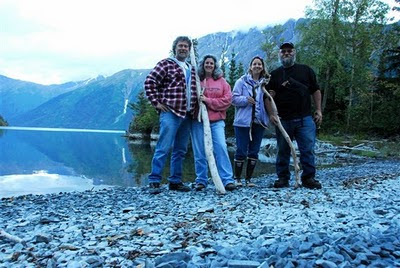 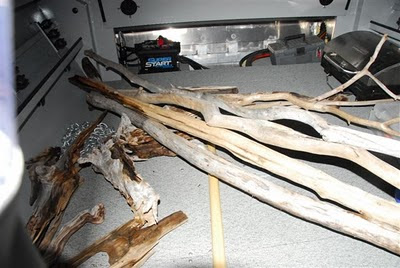 There's one other part of our first boating trip that I haven't told yet.  It ended here. 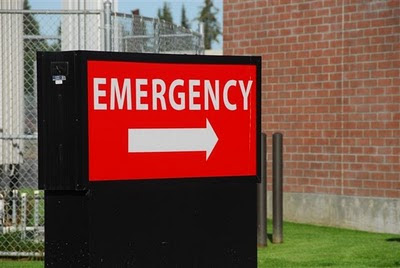 Bummer, huh?
Here's the story:
Before we collected driftwood, before we saw awesome reflections on the beautiful water, before we met our friends, before we broke the boat in... and even before we even ventured away from the shore for the very first time... The Fisherman had an accident.
You see that antenna sticking up on the boat?

Well, for transport - for towing - that antenna was folded flat down.  It was sticking out well into the deck area of the boat. It was hard to see.  Just minutes after we launched the boat into the water and had just gotten in it to head out, The Fisherman turned around and walked right into it!  It was at exactly his eye level.  It went right into his left eye!  Oh my gosh, it was so scary and so gross!  The Fisherman hollered and hit the deck, holding his eye in great pain.  You can imagine.  When he took his hand away, there was a dash of blood on his hand!

His eye immediately began to fill with bright red blood.  It was awful and hurt so badly.  It was pretty gross to look at, too. As it got to where he could check his vision and have me look at the eye, we discovered that it was only the white of his eye that was turning red.  His iris and pupil looked fine and his vision was not affected dramatically.  But boy did it hurt.

Not one to be derailed, The Fisherman was determined to carry on with the day and the outing as planned.  We'd just driven 50 miles to Cooper Landing, 50 miles away from Soldotna, the hospital, any clinics or any doctors.  And we'd JUST gotten into the boat!  So, he determined to suck it up and carry on.  Knowing the eye needed to be looked at, the next morning we called an Opthamologist, hoping to get in for an appointment and thus circumventing an Emergency Room visit.  We figured the ER would call in an Opthamologist anyway, so why not try to go right to one instead.  We couldn't get in for an appointment because the guy had 23 patients on the books for the day. So, we were told to go to the ER and if they judged it necessary they would call the eye doc in.

Off to the ER we went.  This is the same hospital that has the beautiful stained glass piece in their chapel that I wrote about in this earlier post.  The waiting room was...empty!  We got right in and sure enough, they said he needed to see an eye doc.  THEY got us in for a squeeze-in appointment a few hours later.

The diagnosis?  The Fisherman tore the "conjunctiva", the white part, of his eye.  No injury to the iris or pupil.  Blurry vision would go away when the swelling went away with healing.  We were to come back in one week so the doc could get a look at the wound after the blood had cleared.   At that follow-up appointment, the doc released The Fisherman from any further treatment.

While it was a nasty and horrible thing to endure, we are so very thankful the antenna did not hit just 1/2" over. Maybe even less.  The Fisherman would probably have lost his eyesight in that eye.  The closeness of this call sends shivers through me.  Thank You, God, for sparing his eye!