Our next boat trip was down to Homer and Katchemak (catch-eh-mak) Bay.  We launched out of the Homer marina, and cruised through the No Wake Zone right past where last year we saw the Deadliest Catch's Time Bandit vessel docked (posted here).  We looked for the Time Bandit but it wasn't there.
It was a gorgeous day and we were looking forward to catching some halibut out in the bay and some cod near Homer's natural jetty, called The Spit.  We took some friends with us, a guy that The Fisherman used to guide with, and his girlfriend.
We motored partly across the bay and then started moving down along the opposite coastline.  This was not at all like tooling around on peacefully pleasant Kenai Lake.  No, this was what I call "big water".  It was rough, choppy, and bouncy.  And the really bad part about it was that this water was by all seasoned definitions "calm".
Right about the time we anchored to try and throw out some lines, we noticed that the fog we'd seen waaaaaay across the Cook Inlet (which Katchemak Bay opens up to) seemed to be rolling our way.
We girls kept saying to each other,
"Hm. That fog seems to be coming our way."
"Wow. That fog is really coming our way."
"WOW. Look how close that fog is coming!"
"Um...I think that fog is going to be on us here real soon."
Until finally, we said....
"Gosh I hope no other boats come barrelling at us through this thick fog we're sitting in the middle of."
Now, as far as I know, fog is supposed to BURN OFF and LIFT when the sun gets high and warm enough, somewhere around noon, right?  Noon.   One o'clock.  Two o'clock.  Three o'clock. We were still in the thick of it.  So much for our gorgeous day.  Oh, it was still gorgeous in Homer, just not out on the water...where we were.
Choppy, bouncy, lurching water. Thick fog. Couldn't find the fish. Some seasickness among us on board. Women worrying about the poor visibility.
I've had better days in a boat.
But finally....finally, the fog started lifting and we could actually see the shore. 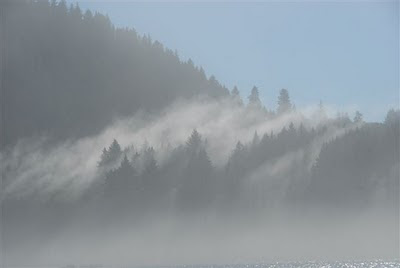 It went and returned a number of times, giving us bright hope and then socking us in again.
At last, it seemed to be lifting for good. 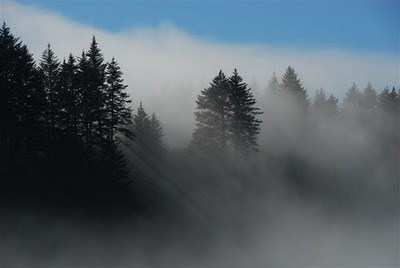 Either that, or we just drove out of it while looking for fish, as the photo below seems to indicate. 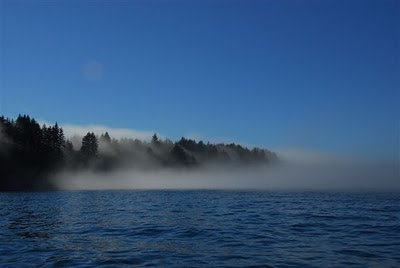 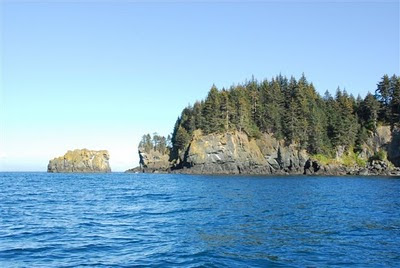 See how "calm" the water is.  It truly is. It's just that "calm", when out on "big water", is still rough.
I've learned, I'm not that into boating on "big water".
The guys threw in some lines with no nibbles.  That was disappointing.  We'd heard two conflicting reports about halibut that time of year. One said, "Oh, I know guys who catch halibut year round in those spots."  The other informed us that halibut migrate out of the bay waters as winter approaches. 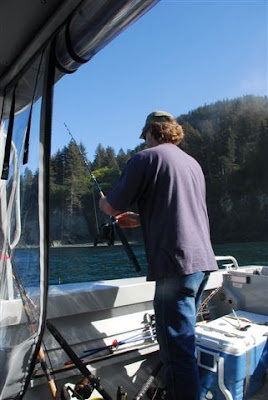 I got a fishing license for the day, thinking I'd like to throw a line in and bring home some extra halibut.  But the waters were so, ah-hem, "calm" that I simply could not even stand up in the deck area without holding on to something.  Since the boat is new, we don't yet have rod holders affixed to the top of the cabin.  Consequently, all the rods were propped up all over the place, spilling into the deck which is rather small in the first place.  Then there's the coolers, the tackle boxes, the etc.  Add in three men fishing back there and a lurching sea, and there was absolutely no way I could stand out there to fish.  My new female friend and I stayed inside the cabin the whole time, safely seated with handles and seat backs to hang securely onto when a particularly large wave assaulted us.
Eventually, (finally!), it was time to make our way back to Homer. Close to the marina we passed a HUGE boat...I guess when they're that big you're supposed to call them ships.  This thing was enormous.  I don't know what it was, but it was big.  It was called the Tustemena (Tuss-te-meena). 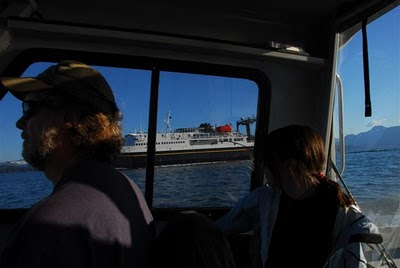 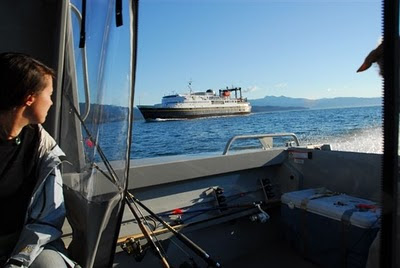 Unfortunately, the photos don't do justice to how big this thing was.  Oh well, I tried to share it with you.
We put the boat ashore on a sandy beach where the girls got out and visited a local business for a pit stop.  Our seasick guest opted to walk back to his truck and call it a day.
We got back on board for some cod fishing right near the beach.  Yeh!  Success!  I even fished.  I staked out a small patch of deck right next to the cabin where I could hang on.  Every cast brought up a fish.  They were still hoping for halibut so when we'd caught all the cod we wanted to keep, the guys kept fishing.  I don't like catch and release fishing - I think it's pointless and pretty unfortunate for the poor fish who gets his lips ripped up - so I put my rod down.
Pretty soon it was getting late and we headed back around the end of The Spit toward the marina.  We entered the No Wake Zone again and there was the Time Bandit.  It was fun to see it again.
A couple days before our Homer trip, The Fisherman informed me that I had one job whenever we take the boat out.  I'm in charge of the drain plugs.  It is my responsibility to know where they are and to make sure they are on the boat when we launch.  The drain plugs are just that: they plug some drains at the back of the boat.  If they are not installed when you launch, you take on water.  I have a very important job. Turns out, The Fisherman himself made sure the drain plugs were on board before I even had a chance to locate them or ask him if he had them.  (What? Doesn't he trust me?) We were good to go.
On the way back to the boat launch, it was dusk, getting dark.  Once the boat was on the trailer and out of the water, I turned around to look back toward the launch and I saw a sign that made me laugh. 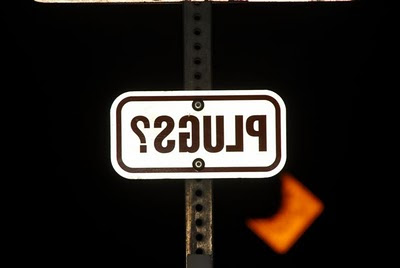 Evidently, it's designed for the guy in his truck, looking in his rear view mirror, backing the boat and trailer down the launch into the water.  Very clever. 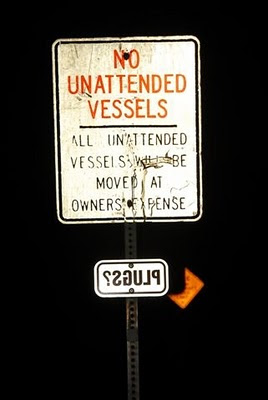 I guess the "unattended vessels" message is designed to be seen normally.  It must be for the guy who's walking away from his unattended boat as he turns around and takes one last look to make sure it's not floating away before he goes to park his truck in the parking lot.
So "?SGULP" was the last tidbit of our big water boating day.  Somewhere around mid-day I concluded that if I never go out in our boat on big waters ever again, it would be totally fine with me. I would not miss it. I would not regret it. I would be happy to not.
Now, to break such news to The Fisherman.
Posted by Judi at 7:28 PM