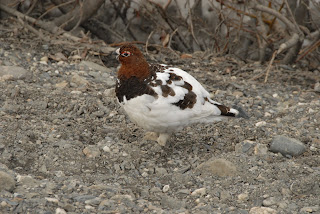 This is a cool, funny, and stupid bird. Cool - because they change colors every winter from brown to white and then back again in the spring. God's cool camouflage design built in to their DNA! Funny - because they have the dorkiest sounding call. Stupid - because they're slow to spot danger and don't get out of your way very fast. Some people call them Stupid Chickens.

MOOSE ENCOUNTER
There were these two moose on the opposite side of the road. We stopped and watched them as they made their way toward the road in the brush behind us. Another car, going the other direction, stopped in front of us. After awhile, I lost track of the moose so I got out and walked to the back of the van to see if I could see them. I was timid and careful to see how close I was to them before I just charged on out into the open. I was still looking behind us across the road when I noticed the woman from the stopped car behind us taking a picture toward the front of our van. I stepped into the road from behind the van to see this: 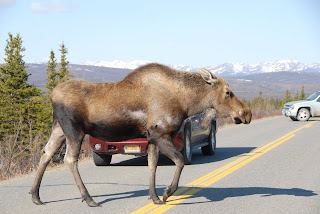 Dang! I should have stayed in the van; she crossed right in front of it. I quickly went back to the passenger side of the van, still in back, to see if I could see her as she went into the brush on our side of the road. Only she wasn't in the brush yet. She was still partly on the road in front of the van. She stopped. I stopped. She looked right at me. I looked right at her. Definite eye contact with this giant a mere 20 feet away. Gasp! Then...my own voice inside my head said,"Hey, take a picture!" I raised my camera, still exchanging stares with Miss Massive. Still staring me in the eye, she took a step toward me! Yikes! " 'Scuse me! Pardon me! My mistake!" Camera came down and I was outta there! I shot to the driver's side back of the van in about one second, putting our van kitty corner between me and her. And therefore, I saw her no more until she was well into the scrub brush on the passenger side of the road. Moose are not to be messed with! But...it was actually quite thrilling and fun! I love caribou. I love their amazing antlers. I love moose antlers a whole bunch but I am almost more fascinated with caribou antlers. They are so graceful and elegant. Unlike elk antlers they're not pointed on the ends and they stand more straight up from their heads than do elk. Females also have antlers, unlike nearly any other antlered animal. And I love the function of their antlers' design. It makes me marvel at God's intentional designs in nature. The paddle like shape of the frontmost portions (I'm sure they have an official name) are used when they graze. In winter, it serves almost like a hand to brush away snow and expose underlying grasses to feed them. I love it! These caribou's antlers are in "velvet," a fur that covers their antlers providing the blood supply for their growth. When it's time to mate, the velvet begins to slough off leaving the bone hard bare antlers that are great weapons for sparing for a mate. 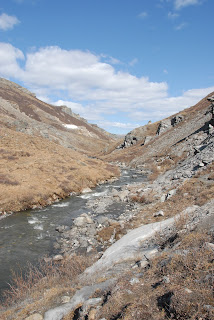 This was a great little hiking trail along the Savage River - or as I called it, the Not-So-Savage River. At least in the early spring month of May, it's not so savage. It was funny: we didn't realize it was a loop. We saw people walking the trail on the other side; we even saw a large group of grade schoolers who looked like they were on a field trip. There must have been about 25 in their group. When we saw some Dall Sheep on top of the hills on the other side of the river from us, we decided we wanted to be on the other side. So we turned around and walked all the way back to the van in the parking lot. We got in the van, drove across the bridge and parked in the smaller parking lot immediately on the other side of the river. We got out and walked to where it was a good place to hike up the grassy, mossy hillside. The Fisherman began climbing up while I waited on the trail, enjoying the scenery, taking photos, and climbing part way up to get photos of him getting photos of the sheep as he climbed higher and higher. Next thing you know, here comes the field trip kids traipsing along the trail on the side of the river we'd just come from. Duh-huh! I guess the trail is a loop! We were probably pretty close to the crossing when we turned around! When we walked back, we saw - for the first time - a sign saying "Savage River Trail Loop". *sigh* We got our exercise that day...especially The Fisherman who climbed the mountain, made it all the way up to the ridges and got some great photos of the Dall Sheep with his zoom lens.
Posted by Judi at 4:20 PM