Mt. McKinley - or as it's locally called, Denali (The High One) - is the tallest peak in North America at 20,320 feet. It actually appears taller than Mt. Everest because of a thing called vertical relief. Since the base elevation around Denali is nearly at sea level, you see far more of it than you do of Everest. I think it may hold the world record as the tallest peak for vertical relief.

We took a flight-seeing trip up into the mountains around McKinley. It was gorgeous! Stunning! Absolutely spectacular! 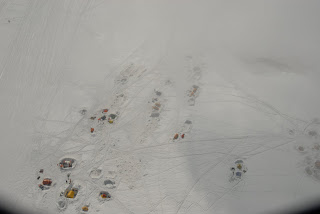 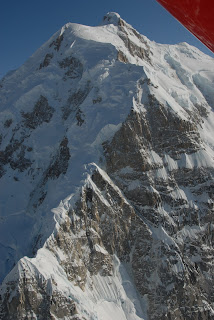 The tour we took included a landing on Ruth Glacier. However, our plane was transporting three McKinley climbers that day so they asked us if it was OK to not land on Ruth, but instead to land on the Kahiltna Glacier at a climbers' base camp. Oh...alright. It was so cool. What another world! There was even a sort of HQ tent that had small solar panels and antennae. I presume it provides the means of communication from camp to "earth" below, finding out who is coming up to climb and also relaying weather info to pilots. Climbers are required to register with the Park Service. At all times, the Park Service knows who is on the mountain, when they were dropped off and when they are expected back. It's life and death up there so it's important to keep close counts of all who go up. In fact, there was a terrible tragedy just last week where two climbers fell and died. (Ugh! What their families must be going through right now! Lord, please help them.) This is a photo of the Kahiltna Base Camp as we approached for a landing.

I loved this scene of a lone tent against the gigantic mountains. You have to remember that we're already several thousand feet in elevation. 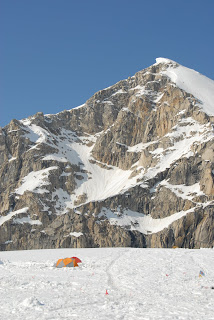 Notice the snow walls at the previous camp sites of climbers who have already left Base Camp. The walls shield their tents from the strong winds. 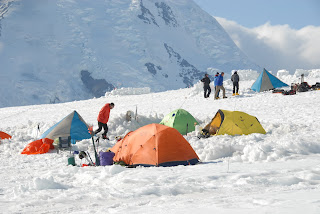 We went with K2 Aviation out of Talkeetna. 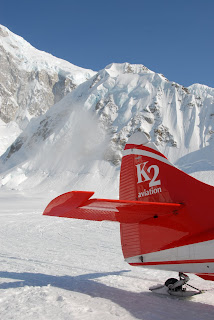 We were supposed to fly right around the summit of Denali on our trip. Our pilot tried a few different tacks but was thwarted each time by wind and weather conditions. Here's a photo of Denali/Mckinley from the highway. 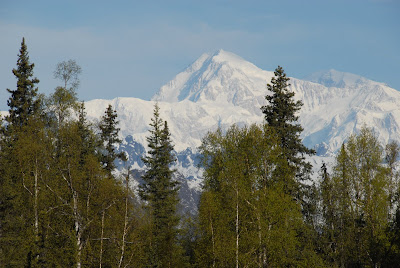