Wednesday, May 2, 2012
We ran into more snow last night between Healy and Denali Park. Just past Denali it was starting to stick to the road. We turned around, pulled into the fancy hotel parking lot, and crawled in the back for a cold night's sleep. With tons of extra blankets, sleeping with a ski hat on, and The Fisherman getting up to turn on the van and heat once in the night, we slept well. We awoke to 22 degrees but were toasty warm under the covers. We also awoke to blue skies. We drove in to the park again, pondering a change of plans. We got to the big hill going down to the Savage River and the road was covered with snow as far as the eye could see - down the hill, around the curve, and back up the other side climbing higher and bending around the hill. We turned around again. On the way out we saw more caribou and had the rare privilege of seeing a lynx cross the road in front of us. By the time we got to him, he was hiding in the woods. The Fisherman said to keep an eye on him because "they always turn back to have a look." Sure enough, he did. 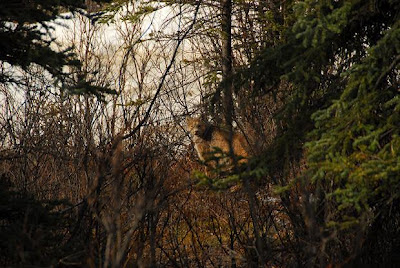 We left the park for real this time and had clear skies and beautiful views of The Mountain all the way down to Talkeetna. What a treat. It was fun to see it from angles we'd never seen before. 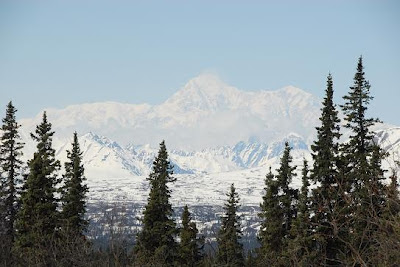 We saw more caribou, grazing and crossing the road. I got a photo of one with Denali in the background. It's a little blurry but I'll post it anyway, because it's cool to have The Mountain in the back.  Some of the other photos came out better. 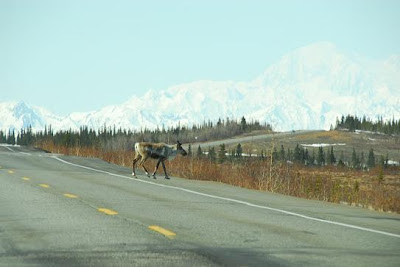 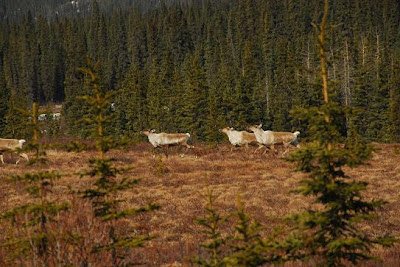 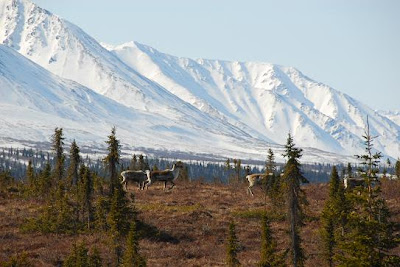 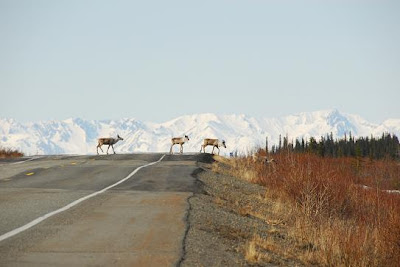 We stopped at The South View for awhile then drove on down to Talkeetna another 50 miles farther. Saw a bullet riddled sign on the way. 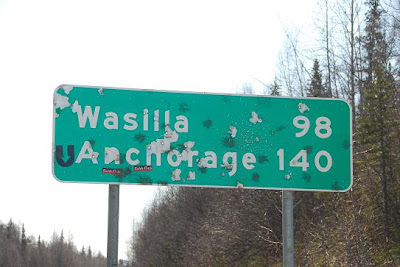 Talkeetna was mostly closed down, too. A couple of shops were open but by the time we parked and walked up, they were closed. It was 5:30. While there seem to be quite a few Christians living in Talkeetna, there is also an equally sized contingency of drug users. The town attracts young partiers and vagabonds in the summer. They had already begun to gather in the town park, hanging out in all their scruffiness accompanied by dogs, laughter and alcohol. We drove around town a bit, checking out some back streets of this tiny town with a year round population of about 750. The drive was disheartening because while the town's main street is quaint with rustic charm, just a street away are junky yards with unkept homes of various construction. Some were old motor homes with a constructed roof built around them. Some were just weather worn and sagging. It's a harsh climate here so I have to give grace for the difficulty in maintaining a home's appearance. Especially when the few jobs in town are tourist related and dependent on those 100 days per year I mentioned earlier. Some of the houses, though were nicely kept. There are acreages all along the 10 mile dead-end road into Talkeetna. It's possible that all the nicer homes are outside of the main town center and we just saw the rundown section of town. "Downtowns" are nearly always rundown.

Along the Talkeetna road we kept passing a really neat photo op. A frozen lake was thawing. Swirling through the thawing snow and ice were old snow mobile tracks from some obvious winter fun. 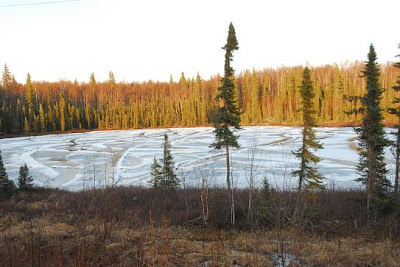 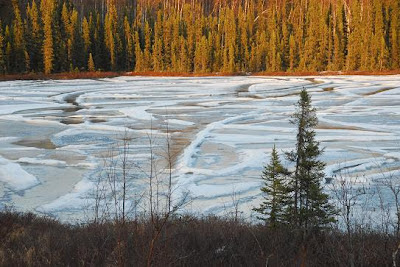 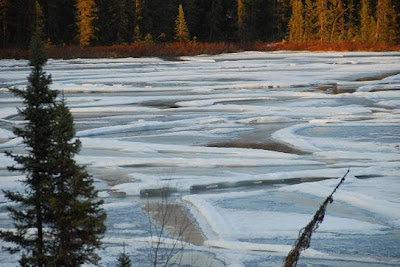 We stopped at a Denali view pull-out and fixed dinner. It was so cold! We were ready for a hot meal. We pulled out the generator and fired up the Fry Daddy. Deep fried halibut coming up! We also fixed some instant potatoes. The fish was hot but the potatoes? Not so much. It's hard to get water to boil when you're only using a little propane burner (a 5-inch-square stove-surface attached to a single propane bottle). And when it's 34 degrees out and the wind is blowing. I think most of my water steamed off before it had any hope of boiling. It didn't help either that the only pan we had was not a pot, but a frypan. Lots of surface area to steam away the water! But we enjoyed our hot halibut - perfectly crunchy and caught wild last year - and our flavorful but just-warm mashed potatoes inside the van as we warmed up with the heater blasting. Another night spent camped around Talkeetna. Saw a hint of Northern Lights right over The Mountain. By the time we drove the few miles to our view spot, they were gone never to return that night. We went back to sleep.
Posted by Judi at 6:32 PM