COOPER LANDING - In the Shadow of Cecil


Driving to work today from The Bear and Miss K's I was impressed anew with the spectactular situation of the tiny town of Cooper Landing. Between two mountains runs the turquoise Kenai River. A narrow stretch of land lies along either side. Sometimes it's just one side or the other, not both.This is Cooper Landing. About 10 miles long, the town consists of a gift shop, that's for sale. A mom and pop grocery, that's for sale. A mini-mart, that's for sale. Another mini-mart with showers and a liquor store. There are a couple restaurants, guided fishing outfitters, and several thriving lodges and B & Bs.

With a year round population of around 350, Cooper Landing's narrow two lane highway is bustling all summer long with trucks, RVs, campers, and motor homes. Traffic is thick. Then there's the occasional Bear Jam. That's when a bear is sighted along the highway, or crossing it, and all traffic comes to a standstill. Aside from the occasional impatient local who takes any opportunity to pass, traffic doesn't move until the first car decides they've seen enough of the great Alaska brown bear. The Kenai Peninsula is home to a high concentration of brown bears and the Cooper Landing area knows an even greater concentration. That's because of all the fish. When the salmon come in from the ocean, a huge portion of them come right up the Kenai. And where there's fish, there's bears.

Several years ago our friends took summer jobs working at Gwin's Lodge, a lodge-restaurant-gift shop-liquor store-charter booking-tackle shop. When the season ended, The Bear and Miss K stayed. Now they live on two acres nestled at the foot of Cecil. Their living room window is filled with the mid-mountain view of the northern range just a mile away. 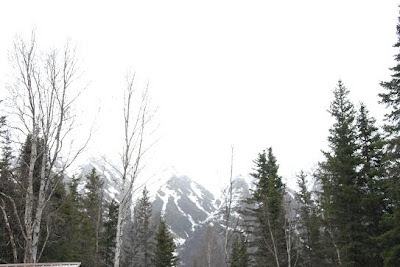 You can see the roof of their garage at the very bottom left. Unfortunately, the mountains were shrouded in clouds. If they weren't you'd see them nearly filling the top of the photo, too.


Living in the shadow of Cecil, their place doesn't get as much sun as most places in Alaska. They've had a hard time growing a garden because, while in the Land of the Midnight Sun, Cecil and several giant trees keep them shaded most of the time. Being at the base of a southern mountain also means the days get shorter faster in the fall and the sun takes a little bit longer to make its appearance come spring.

These next two photos give you and idea of Cooper Landing's situation between the mountains. Here I'm looking south from the porch of a local shop I'll write more about in a couple days. 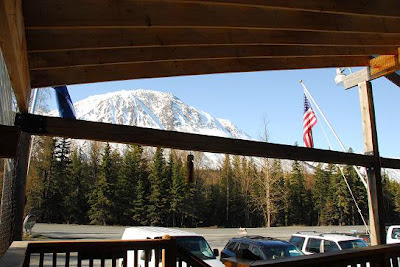 And here's the north view from the parking lot of the same store. The mountains are so close and little Cooper Landing is nestled in between. 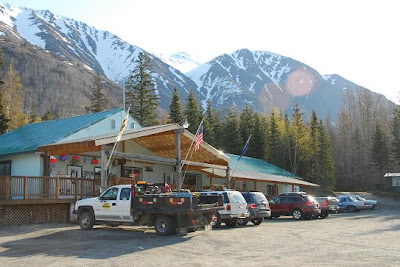