Well, I'm certainly behind in chronicling my summer adventure, aren't I?  I'll pick up way back in July when I took a day trip to the town of Seward.

I'm on another mission, similar to my Quilt Walk mission earlier this summer. The area Visitors Centers have a contest going on. They print up these little books called "passports" and if you get 10 of the 13 locations stamped in your book you can send it in and be entered in a drawing to win a vacation package on the Kenai Peninsula. I wanted to do some exploring and visiting of favorite spots this summer anyway, so I picked up a passport and am pursuing collecting my stamps. I stopped in Moose Pass, for the very first time, to get stamped there.

Somewhere between the tiny hamlet of Moose Pass and Seward I ran into road construction. It was at a place called Ptarmigan Creek. It's one of The Fisherman's favorite places to stop. There's a little pull-out above a small dam and it's just very peaceful there. There's room for only about three cars. Since The Fisherman was working, I was just considering stopping there for a few moments in his honor when I came to a complete stop in a line of cars waiting upon some road construction. We were stopped for about 20 minutes, during which time I breathed in the view. If you have to be stopped for highway construction, this is the place that turns a frustration into a wonder. 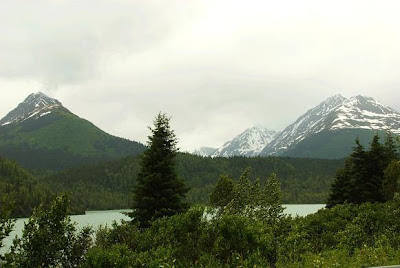 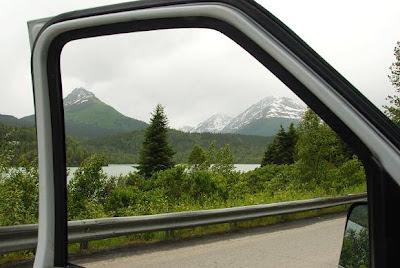 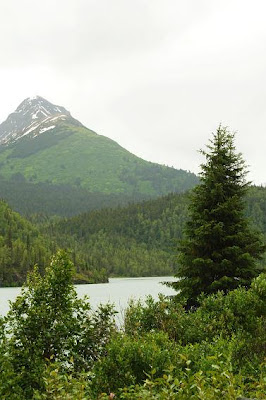 At the Seward Visitors Center, where I was to get my Seward stamp, I saw this sign and laughed. I guess there must be a town called Seward in the state of Nebraska as well as Alaska. 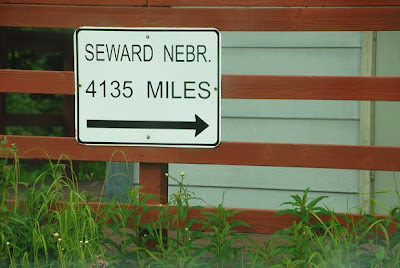 I wonder if it's named after the same Seward who is responsible for the purchase of Alaska from Russia in 1867. Secretary of State, William Seward, orchestrated the purchase of Alaska's 6 million acres for just over 7 million dollars. Pennies per acre. Everyone thought it was a crazy idea and that it was a waste of money. The whole deal became known as Seward's Folly. Just about 30 years later, gold was discovered and the rest is history, as they say. She's been a state for over 50 years now and we've been in love with her for over 20 ourselves!

Seward has always had a charm for us. It's on Resurrection Bay with a giant mountain behind and mountains across the water. It has the Alaska Sea Life Center where they do research and rehabilitation of orphaned or injured wildlife. There's lots of aquariums, sea lions, harbor seals, and water fowl such as puffins and eider ducks. It's quite educational and well worth the visit.

Seward also has an exciting marina. I love marinas. Seward is a cruise ship destination and, out past the small boat harbor, there's always one of those behemoths docked. There's a cute downtown strip of tourist shops. The Fisherman loves to fish for Silvers (Coho Salmon) from the rocks of the bay.


During my day in Seward, I visited some of my favorite shops. The Ranting Raven is one of them. It's a cute art gallery and bakery. 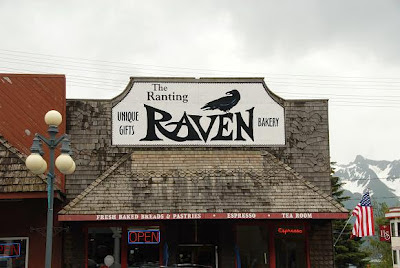 The Sea Bean Cafe is a cozy internet cafe from where I've posted to this blog in years past.  I love their slogan:  "Sit. Sip. Surf." 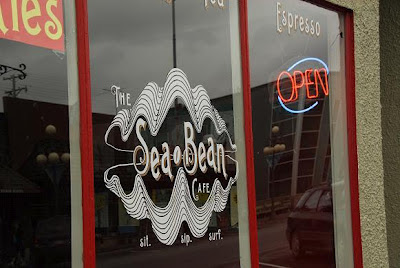 Then there's the Liberty Theater. This is not your typical movie theater, as you can tell from the outside. 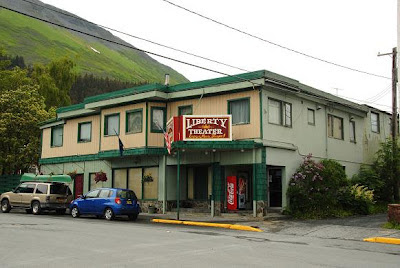 You enter by the Coke machine shown above and are met with a set of stairs. At the top of the stairs is an old fashioned ticket booth. You receive an old fashioned paper movie ticket, dispensed from the old metal desktops with the little trap doors from where the ticket spews out after your purchase is rung up in the register.  Just before we left for Alaska this spring I found a ticket from a movie we saw there several years ago. I taped it into my journal. 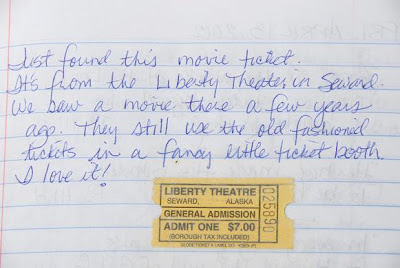 I love the Liberty Theater. 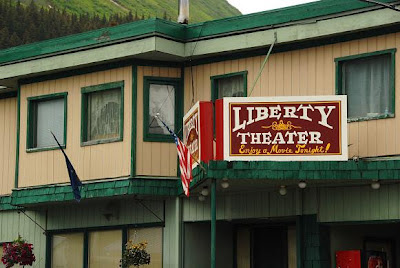 This is the "marquee" -- a poster -- revealing there is only one nightly showing of one movie per week. Oh, and they're going to be closed for four days. Small town theater owners have to go on vacation, too. 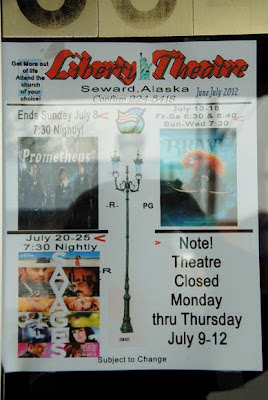 Just outside the theater, I saw this scene. It seems the old fashioned theater is right next door to
an old fashioned hotel, with lovely lavender lilacs in between. 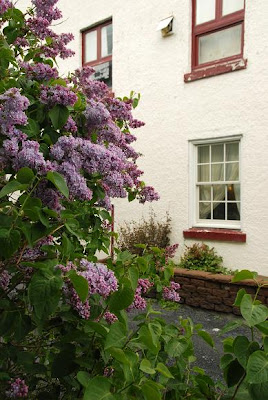 As you drive "out of town" behind the Sea Life Center, there's a big rushing waterfall that's quite exciting to drive past. If you get out of your car, you might just feel the spray. The roar is tremendous. At the waterfall you think there's simply no more of Seward to be had, but a drive down a narrow pot-holey gravel road -- with the bay immediately on your left and a cliff immediately on your right -- will lead you to Lowell Point. When The Fisherman and I first went to Seward, we drove out to Lowell Point and there were only a handful of funky houses of odd shapes and construction. Now, over 20 years later, there's an entire village of cabins, summer shacks, and an RV campground. Charter businesses have sprung up and a little tackle shop/general store oversees the whole point. It's still rather funky, sort of hippie-ish, in appearance. Rather ramshackle, really. It's definitely not the upper class place to camp.

But we still love going to the beach there. It was a few years ago there that we met a goofy dog intent on getting us to throw sticks for him, even when those sticks were 5 foot long branches carried in his mouth as he merrily followed us.

What I love most about the beach at Seward's Lowell Point is it's black sand and millions of black shale rocks. It's so cool.  This year I had an idea. I wanted to collect some of those black rocks and put them in a jar to keep at our cabin. Maybe even a second jar to take home to Arizona. I went to the beach with gallon sized plastic bags in my pocket. I filled two of them with rocks and one with sand. And then I found some driftwood. You should have seen me trying to lug all those bags back to the van with me! It was about a 150 yard walk and those bags were not only heavy, they were slippery. I loaded my arms up so my hands were free for the driftwood. It was quite a trek back to the only legal place to park. It was raining and I was clompping along in my cute new rubber rain boots. I was sure glad to get back to the van and set everything down!

See how black the sand is compared to the typical Alaska gray rocks? 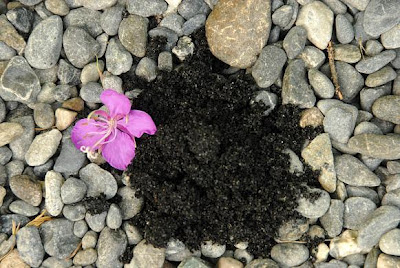 (Here's my rocks & sand all jarred up back home, sitting on the gravel outside our little trailer in Soldotna.) 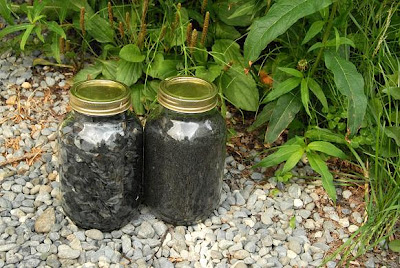 I headed back up the rickety road to make the 90 mile drive back home to Soldotna. But wait...what are all these cars stopped for? I'd better pull over (at a thankfully wide spot in the road) and see.

WHALES in the bay! 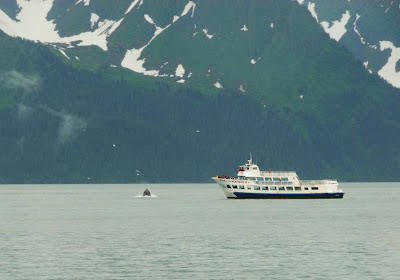 The group on this charter certainly got their money's worth!
A mama and baby were swimming all around the center of the bay.
There was even a kayaker out there to the right of the boat, but he maintained his distance. Wise. I never could get the whales, boat, and kayak in the same picture frame. What a thrill for that guy! 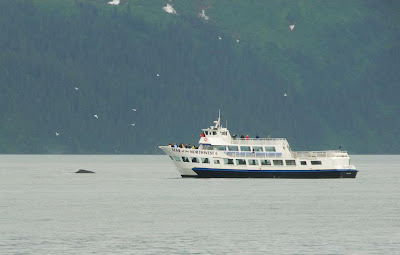 After spending about 30-40 minutes watching the whales and staying longer than anyone else who'd stopped at my section of road, I looked up ahead and saw others parked aways up. Now, what are they looking at? The were looking down.

And then I spotted him. A sea lion. I watched him dive and resurface farther away from them but closer to me. Oooh, how fun! I wonder if he'll come closer enough for me to get a good look at him.

He dove, swam, and came up closer still. It was so fun.
Next thing I knew, he bobbed up directly in front of me. 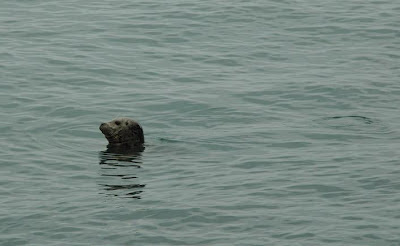 I only got one shot off before he got scared and slipped under the water. I didn't see him again.

I had a really nice day.