Remember the post where I started out talking about the "Alaska Grown" symbol that adorns many clothing items for sale here? 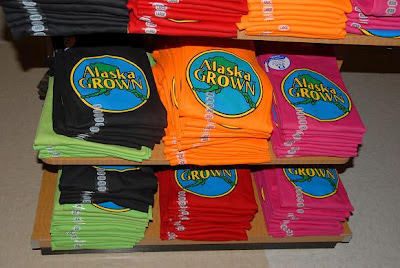 While it seems to have become an icon of pride in being raised in or living in Alaska, I presumed it was originally a logo chosen to promote Alaska grown produce.


Last week my presumption was confirmed. I had my first Alaska Grown siting where the symbol was NOT on a piece of clothing but actually on something that was grown in Alaska. 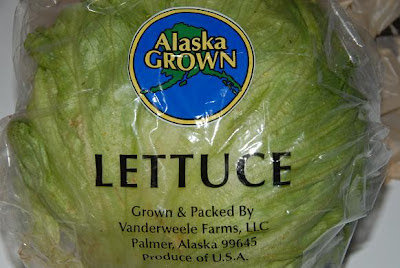 It's almost like another country up here because Alaska is so far removed from the rest of the Lower 48. For a state with such a small population (about 750,000 people living in 6 million acres), Alaska has a lot of locally made, grown, fabricated, or produced industry. While much still comes from the Lower 48, shipping costs are killer. And things can take approximately forever to get here, often coming by land to Seattle and then by barge up the coast. So anything that is home "grown" by any meaning of the word is a real plus for the state. Alaskans are proud of what originates in Alaska, whether it's produce or people.
Posted by Judi at 1:02 PM