True Confessions and Getting Home

Whoops! Though I promised this post for the very next day after my last, I just discovered that when I revisited the scheduled post for some last minute edits, it got "saved as a draft" rather than "published". Here I've been thinking it's been up for a week, only to see it's been sitting in my Drafts all along and with a scheduled post date of January 14th. Sheesh! So, at long last...
It's true confessions time.
I have to be honest.  I have to confess.  Spill my guts, own my junk, and come clean.
Here goes....
I wore these three shirts........................ 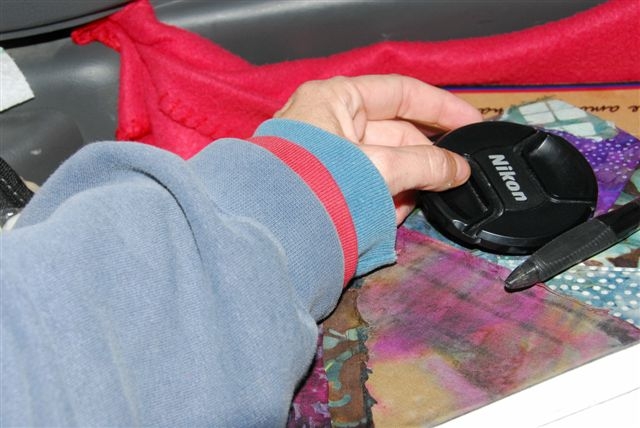 or some combination of them...........
for at least five days straight at the end of our trip.

﻿
Let me explain:
1. We were super busy, of the non-stop variety. I was layering and unlayering like a crazy woman the day we packed up to leave our particular portion of Alaska for the winter.
2. We were camping - in our van, yes, but it's still camping. And let's face it; when you're camping you wear the same clothes for a couple days. I just kinda got carried away.
3. It was REALLY cold and, hey, we lived in a van; it's hard to change clothes.
4. But the real reason was that it was SO cold I slept in my clothes. (Yes, it's worse than you thought.)
5. It was SO cold I was not about to put on freezing new clothes in the morning.
6. It was, you remember, down into the 30's and 20's every night.
7. Which meant waking up in 30 degrees, seeing your breath, and having frost on the ceiling. Just coming out from under 20 pounds of warm covers was enough of a shock. I was not about to change into ice cold clothes. No way. No how. No sir.
8. You can't make me. You can't make me. You can't make me!
9. That's all there is to it.
10. Those conditions just never went away until we drove far enough south, so....
Please don't give me that look.
I can't even remember how it got started, though I do remember at some point I grabbed the giant blue sweatshirt of The Fisherman's one morning because I was in the mood for wearing a huge jeans-colored sweatshirt that day. I wore it as a "jacket" for a couple days, putting it on when I needed an extra layer now and then. The morning after our dusty Denali day, our friends let us use their hotel room to shower up.  I believe that's when I donned the blue long sleeved tee-shirt and the burnt orange colored light sweatshirt. Then, I kept using the giant blue sweatshirt to stave off the cold. And then...well, I just pretty much stayed cold for five more days, with the occasional peeling off and re-putting on of layers.
So, I never got out of those three shirts till we drove out of the bitter cold.
In case you're incredulous,
in case it's just too horrid for you to believe,
in case you're saying "It just can't be!"........
Here I am with the boat on Sept 15, the day we spent all day packing up and preparing to leave our cabin for the winter. It was the beginning of my giant blue sweatshirt addiction phase. 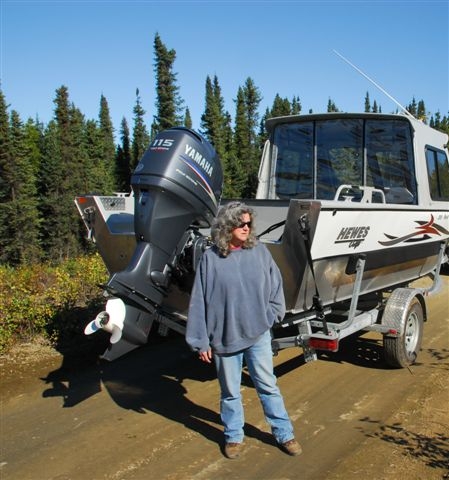 No evidence for the 16th, but we spent the day in Anchorage and I'm pretty darn sure I wore at least the first two of the same layers.
And here I am September 17th in Denali Park. 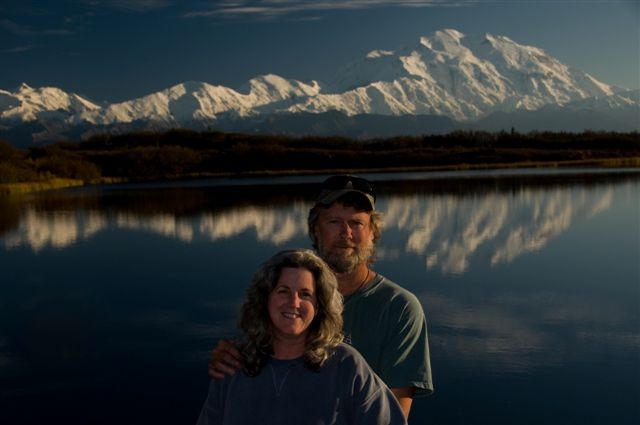 OK, here we start into the serious problem. September 18th at the Arctic Circle, layers 1 and 2. Layer 3 was bunched up in the car for this shot. 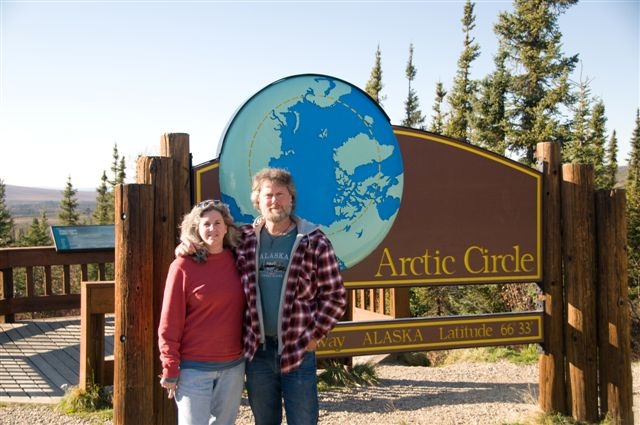 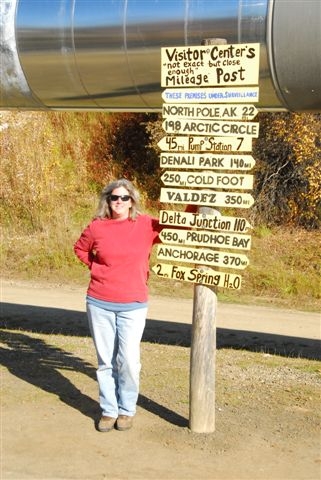 (after the all-night Northern Lights chase in 29 degrees, going to bed nearly frozen at 5:30 a.m., sleeping four hours, and hitting the road again). Layer 3, again not making the photo.
Somewhere in Canada around September 22nd or so, driving along, I suddenly realized the shocking truth that I'd been wearing the same three shirts for five days.

I knew I just had to 'fess up and come clean (seriously!), so I gulped back the humiliation and took one final incriminating photo.

So there you have it. My True Confession of The Three Shirts.
So there you have it. I wore the same clothes for five days and what's worse, I didn't get a shower from the 18th to the 25th Yes, I felt gross. But, that's what happens when you're camping, right? It felt GOOD to get clean when we got home, I can tell you that!
On to other things: Note my goofy blanket contraption in the photo above? I rigged it so it would trap the warm air on my feet from the heater. My feet are ALWAYS cold. When the heater was on the "Floor" setting, I'd hook the blanket into the dash and drape it over my lap so as to seal in the heat on my feet. When The Fisherman's feet started to catch fire and he couldn't take it anymore he had to either turn it off or change it to the top vents. Then I would take down my contraption and wrap the blanket entirely around my feet and legs. Why is it that only on the passenger side there's a constant cold draft coming all the way from the back behind my seat and swirling around my feet? The driver's side doesn't have that problem. The Fisherman doesn't have a problem with cold feet. I do. My side gets the draft. Not fair. To either of us actually!
Well, by now we' were getting farther and farther south toward the Canada/US border. The days are a blur with 12+ hours of driving. We cover so much ground I usually don't have much idea of where we are. That phenomenon gets even worse when I try to look back at pictures and remember where we were, what day it was, how close to which border we were. It's all a blur.
But somewhere in British Columbia was this pretty bridge: 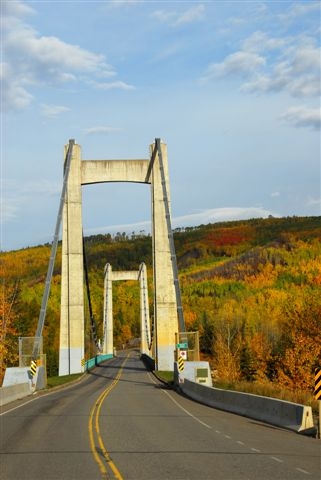 And this amazing sunset: 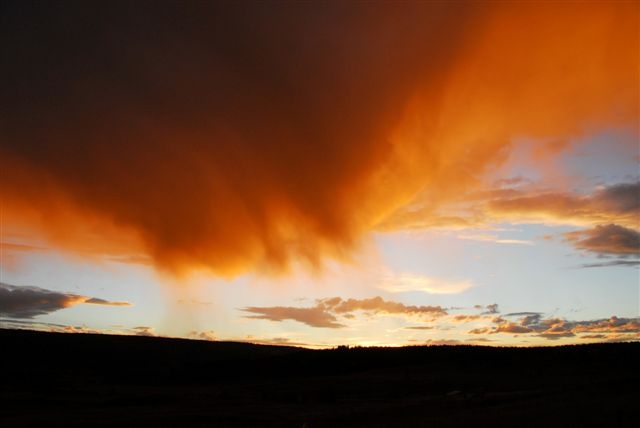 Then, at long last, just 25 miles from the US border, we saw our favorite fruit market.
Their sign boasts, "Grown here. Sold here." 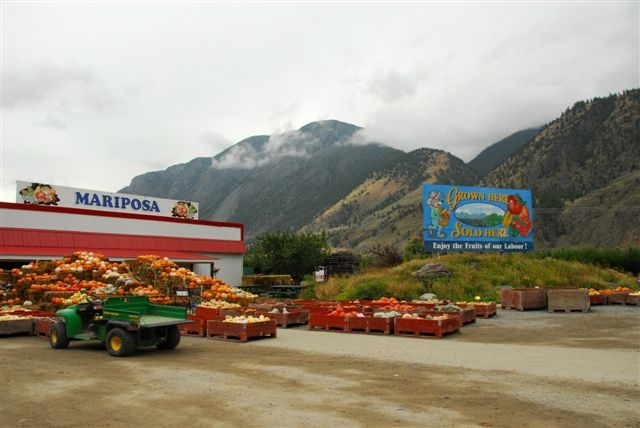 I think it's funny that we come all the way from Arizona, where the name "Mariposa" is more common and fitting, and find a Canadian fruit market named Mariposa.  And it has a goofy cartoon coyote sign. I guess coyotes are everywhere, even in Alaska, but they just seem to be such a southwestern canine to me. 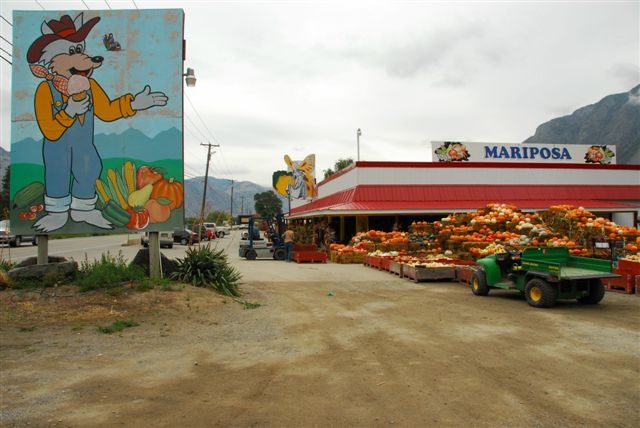 Here's some of their pumpkin and squash crop. 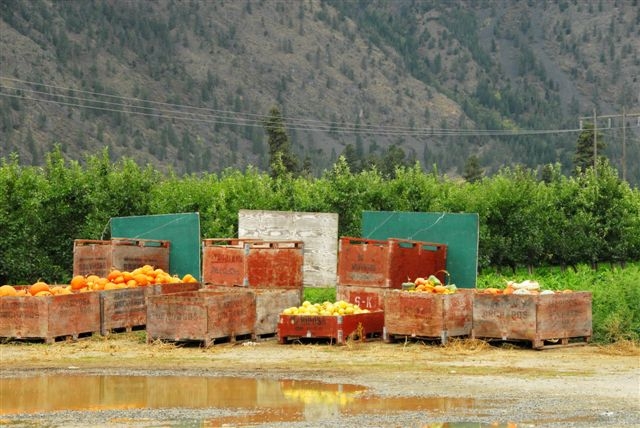 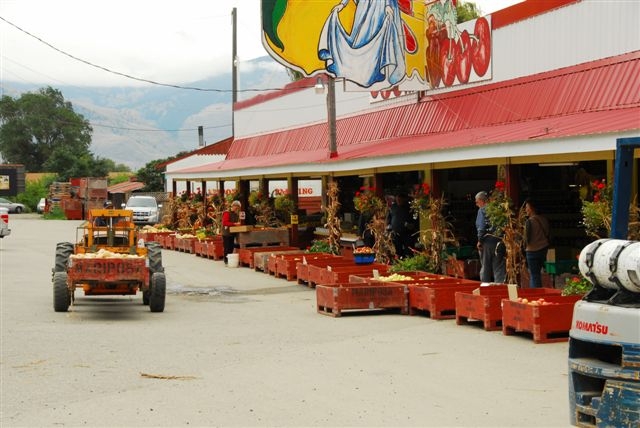 Inside they have more vegetables. They also have tons of jams, syrups, gift packages, flavored oils and on and on. 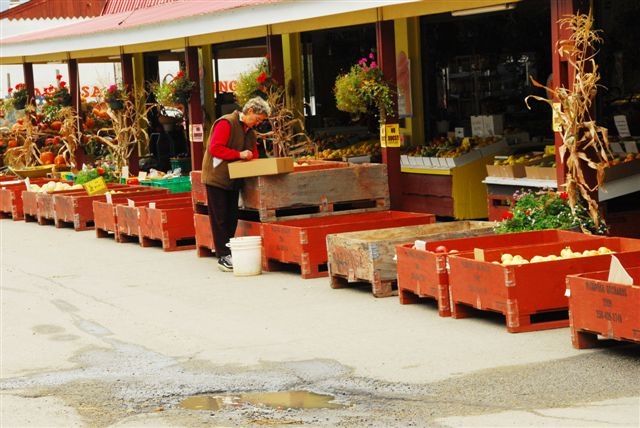 If it wasn't 36 hours away from home, we'd buy even more. That is, if we had even one more square inch of space in the van.
That's the end of the photos, friends. Once we hit the States, it seems we're so tired and ready to be home that we run out of picture-taking steam. It's too bad, too, because some of the scenery is really beautiful. Washington with all the roadside apple groves. Idaho with it's beautiful Lake Coeur d'Aleane and quaint town of Wallace. Montana's beautiful rolling hills and distant mountains. Utah's red rocky areas, the hip quaintness of Moab, and the most unusual little town called Bluff. It's situated on flat land nestled right up against some beautiful straight-up bluffs. The highway winds through the town that's just a couple miles long.
Then we hit northern Arizona. Dry, barren, desolate northern Arizona. It's the hardest leg of the journey home. Almost there. Extremely tired. Ugly scenery. Days of driving behind us and several hours to go.
The Fisherman drove 18 hours that last day. He wanted to get me home by Saturday night so I could go to the quilt show I had hoped we'd be home in time for. Its last day was Sunday. I told him I could never mind it and be just fine, that it was OK, and he didn't have to hurry home. But he wanted me to be able to go. Sweet. Sweet. Sweet.
We got home at about 1:00 a.m., said "Hi" to the cats, and went to bed. I got up the next morning, SHOWERED, and made it to the quilt show by 10:30, surprisingly awake and able to enjoy it thoroughly. I even went over to the Fall Festival where we usually have a booth set up to sell The Fisherman's photography. We didn't sign up for it this year because of our special Denali Road Lottery opportunity. I heard we were missed, which is a good thing.
I feel like I've re-lived the whole trip home in posting these photos and telling the stories. In my mind, we just got home and I'm bushed. I just looked at the clock on my computer and it's nearly 1:00a.m. as I finish out these Journey Home stories.  Deja vu, anyone?
Posted by Judi at 12:38 AM