The Heavens Declare the Glory of God

You remember from yesterday's post that we drove on the Dalton Highway to the Brooks Range and the North Slope, stopping at Mile 270 to turn around at 8:00 p.m. We headed back south as it grew dark hoping to see the Northern Lights, or Aurora Borealis. We'd heard they had been very active recently and they were the whole reason for this trip. We were not disappointed.
Just north of the Arctic Circle, around 1:00 a.m. they showed up. They are an amazing sight. With such a light show I almost expect some kind of noise to accompany them. But there was nothing but silence. It was awe-inspiring. They started out as just a vague greenish hue above the horizon. We stopped on the road, and the photographers took out the cameras and tripods and ran tests for camera settings.
The living lights grew and stretched across the sky. Soon, they began to move to a different location in the sky. When they did, they began to form streamers and to swirl and dance. Oh my! 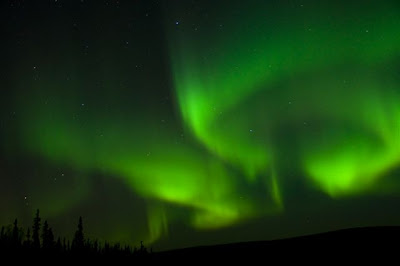 It was breathtaking. What a marvelous first experience of the Northern Lights. 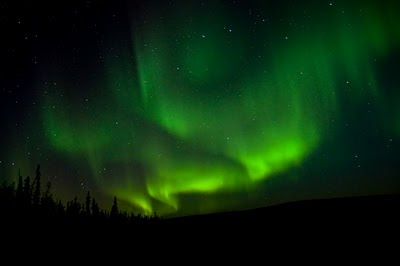 After awhile, they seemed to fade and disappear. We got back in the truck to drive until we saw them again. Each time we saw a hint of them we found a piece of road that had a good view and stopped again.
The sky was full of stars, too. The Fisherman set his camera exposure so he could capture both the Aurora and the Milky Way in one photo. Absolutely spectacular! 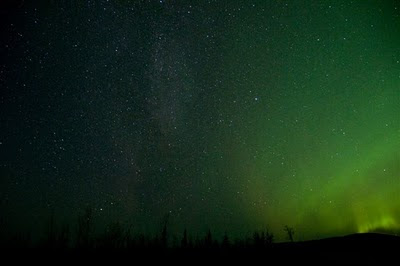 As the chase, and the night, went on, the magnificent display changed over and over again. Eventually I wimped out (more like, soon I wimped out) and watched the Lights from bundled up inside the truck. The Fisherman, however, stayed outside virtually all night long in 29 degree weather. That's why he's the "real" photographer and I'm only the dabbler. 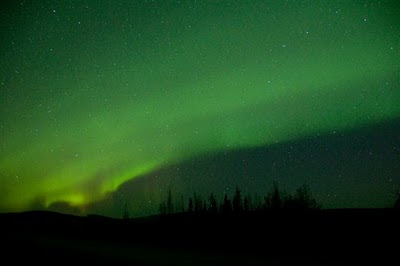 At one point, the lights stretched above the horizon in a perfect gentle arc. All the way across the sky, this arc seemed to be a dome above the earth. As we stood there at the top of the earth, The Fisherman was especially moved with an inner glimpse of the earth and heavens from afar and he marvelled at God's immensity and was stunned by His glory.
"The heavens are telling of the glory of God,
and their expanse is declaring the work of His hands"
(Psalm 19:1)

As night gave up a sliver of horizon to the coming dawn, we were excited to see The Fisherman's photos show both the dancing green lights and a hint of the coming sunrise. 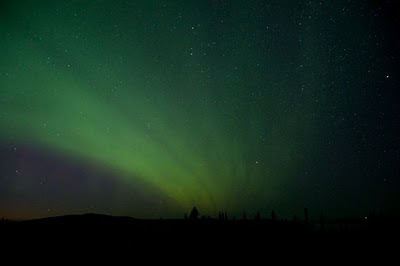 For by Him all things were created both in the heavens and on earth, visible and invisible... (Colossians 1:16) 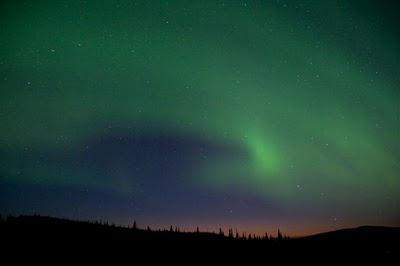 ...all things have been created by Him and for Him. And He is before all things, and in Him all things hold together. (Colossians 1:6-17)

I know there is a scientific explanation for the Aurora Borealis, something to do with the earth's magnetic field and solar flares on the sun. But you know, I think I'd rather not fully understand it - whether it's fully understandable at all. Sometimes, knowing the intricate explanation enhances the awe and sometimes it just competes with it. 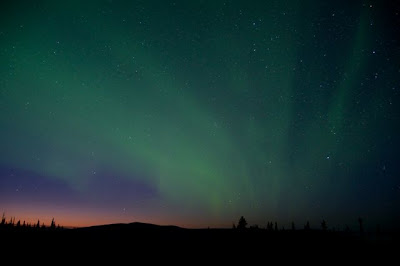 For right now, I don't think I even want to grasp the details of how they occur. If you could take the whole subject of understanding the Aurora and project it into a single moment of viewing them, my thoughts on not wanting or caring to know the specifics would be like saying in the moment, "Shhh! I just want to stand in awe. Don't talk; I just want to absorb the thrill of witnessing this magnificence." 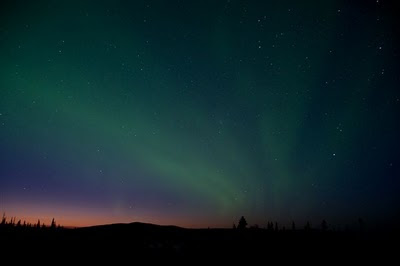 Our God is an AWESOME God!
The heavens are declaring the glory of  God, and their expanse is declaring the work of His hands. (Psalm 19:1)
Posted by Judi at 12:24 PM