So, we had our spectacular day in Denali Park, thanks to the generous invitation of some photographer acquaintances. I forgot yesterday to post a photo of us at Reflection Lake. 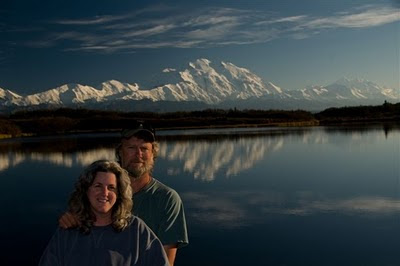 Our awesome photo adventure didn't stop in Denali. Our friends were headed north of Fairbanks - indeed, north of the Arctic Circle - in hopes of seeing the Aurora Borealis. They invited us to join them for another day in pursuit of some amazing sites.

About an hour or so north of  Fairbanks we hit the Dalton Highway. It's dirt. As we raced along at breakneck speeds (or so it seemed from the back seat) we stopped whenever any of us wanted to take photos. Our fast driving hostess was gracious in that whenever she passed a roadside outhouse, she tapped the breaks and asked, "Outhouse anyone?" With all the "I'm goods", she'd accelerate again and we'd continue careening down the road. Time was running short for the day. It was a long drive, especially with stops for photos and outhouses.

The landscape changes drastically from Fairbanks on up to "The North Slope". The Slope, as it's called, is exactly that. As you travel farther north you cross the Brooks Range. From there, the terrain slopes downward toward Prudhoe Bay and the Arctic Ocean. The Slope is where the oil comes from. There are several pumping stations up there. In the summer, I don't think it's so bad but during the winters, it's brutal. Men and women often work a two- weeks-on/two-weeks-off schedule and the pay is very desirable. Each station seemed to have it's own landing strip and helicopter pad. Some long-time employees even live in the Lower 48 and fly up every couple weeks for their stints, courtesy of the company they work for.

But I'm getting ahead of myself.

We came across a couple of female moose while we were still in the grassy and wooded part of the state. The sun was so beautiful it was a photographer's dream. 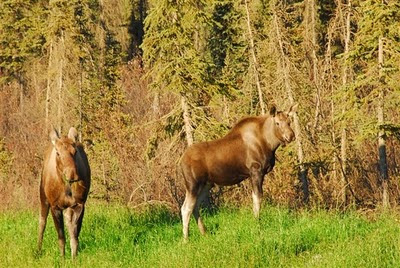 As we watched them munching the lush grass, they watched us. 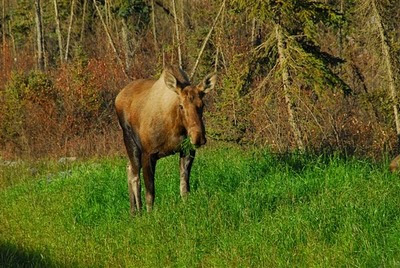 We took several pictures before this lanky gal turned and revealed that she was sporting a tracking collar. Looks rather uncomfortable to me. 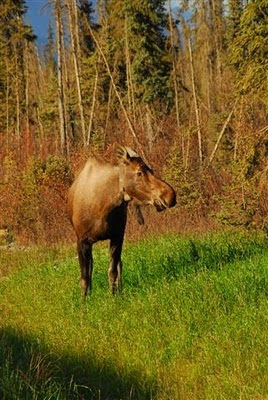 But don't you love that crazy dangly thing on her neck?
I'm sure that has a name but I'm sure I don't know it.
The sun was bright and shadows deep.
Reflections always catch our eye and stopping at this scene was a must. 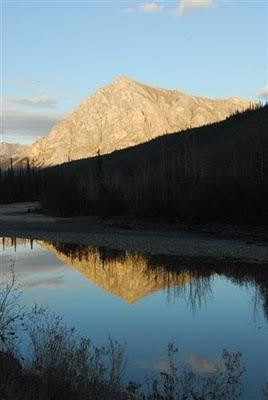 The best photo I took of this scene is the one below. Unfortunately, I didn't see The Fisherman at lower left in my view finder. If he'd been hunkered down he might not be noticeable, but I got him right as he was standing up. Oops! 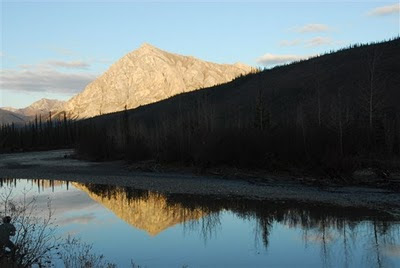 A slight pivot to the right and there was another gorgeous mountain reflected in the quiet river. 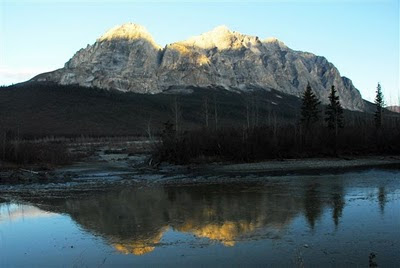 I was really pleased to be on our extended adventure. There are places The Fisherman has been in Alaska that I've never seen. I never thought I'd get north of Denali Park, at least not for a long time. One of things I really wanted to do was cross into the ARCTIC CIRCLE. And here we are: 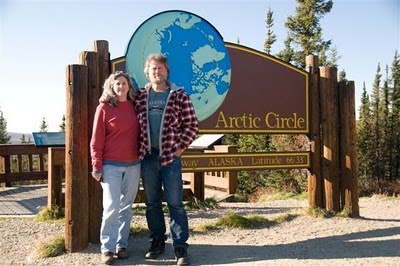 Another thing I wanted to see was COLDFOOT.
Now, here's an insight into who I am: Coldfoot is nothing.
And I knew it.
Still, I wanted to see it.
Why?
Well, because it's The Northern Most Truck Stop in the country, of course. And because I read a book about a famous Alaskan who built it up from even-more-nothing back in the early 1980s. At that time, they even operated out of some tents. Now it has it's own post office. 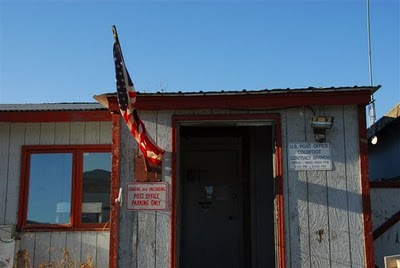 Because Coldfoot is a truck stop, there's a huge expanse of dirt parking lot running between the main building and the other side where there are some bunk houses. I don't know if they're still rented out. On the bunkhouse side is this Welcome sign  explaining where you are and that Coldfoot began as a gold mining community around the turn of the century (the turn of the last century). 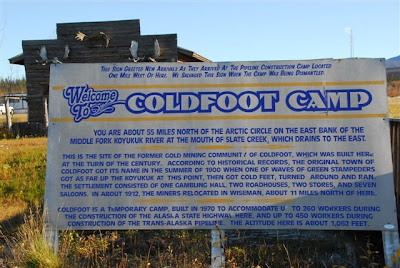 OK, are you ready to see "Coldfoot"?

Here it is, in all of it's nothing-ness: 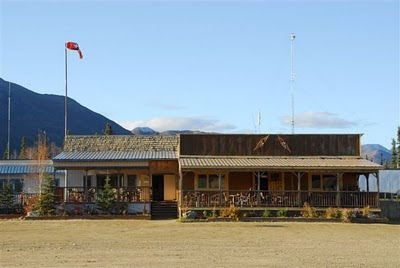 Ta-daa.  Coldfoot. This is a restaurant. There's a separate dining area for truckers, a small gift shop, a buffet area and another dining room for non-truckers. I think there's also showers and some sort of  rec room/lounge for truckers. (But I may be confusing the farthest north truckstop in the nation with the BEST truckstops in the nation, Flying J's who have great facilities for truckers and definitely have a truckers lounge.)

Here's the other side across the truck-stopping expanse of dirt with the bunkhouses in back. 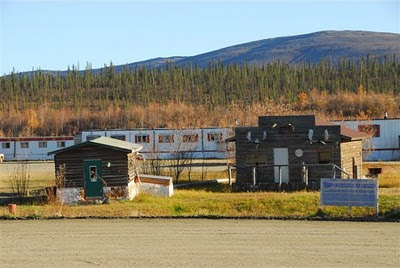 That's about all there is to Coldfoot. You've seen it all.
Ahh, but I've actually BEEN there, don't you know.

One of the things that caught my eye inside was this log post behind the cash register counter. 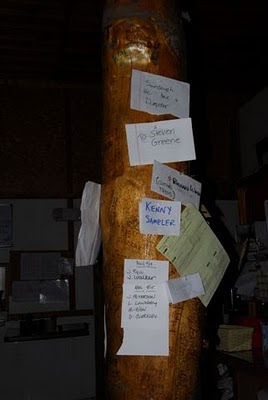 It's a message board. I love it. Have a message for Kenny the trucker? Just write it out and tack it up to the post. He'll get it the next time he pulls in for a bite to eat and some company. It is, after all, the last truck stop before Prudhoe Bay. He'll show up.

The book I read is called One Second to Glory, about Dick Mackey and written by Lew Freedman. Mackey's a former and famous Iditarod musher who was on the ground floor of getting the Last Great Race established in 1973. His famous win came in 1978 (his 6th Iditarod) when he ran beside his team down Front Street toward the finish line. Amazingly enough, the 1100 mile race, that took over two weeks to complete, came down to a foot race between 1st and 2nd place. Dick Mackey's dog team crossed the finish line literally one second ahead of Rick Swenson's. Controversy swirled for a few moments as Swenson moved his team and himself across the finish line, whereas only Mackey's team had crossed. For the first time the question arose as to whether it was the musher or the team that had to cross. Finally, with a now famous line in Iditarod history, the Race Marshall declared, "They don't take pictures of the horse's ass, do they?"  That settled it.
Later on, Mackey saw the opportunity to build up Coldfoot into a successful business that would also be of tremendous benefit to the truckers. One of the things I read about was a record temperature differential one year at Coldfoot. When we were there I saw the weather worn sign commemorating it. 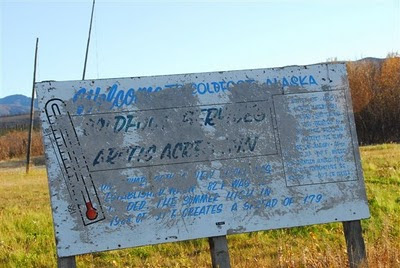 It's illegible now, but here's a photo from the book when Mackey went back to visit Coldfoot.  It describes that on January 26th it reached -82 F and that the record high for the summer was +97 F.
That's a 179 degree temperature spread within one year. That's just crazy! 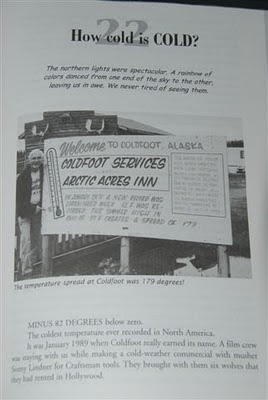 From Coldfoot we drove north to The Slope. How far north we drove was determined by the time. We drove till about 8:00 pm when the light had grown grey with dusk. We found an excellent pull-out just past a pumping station and got out for a stretch. This was the farthest north I have ever been -- Mile 270 of  the Dalton Highway -- and being that I collect rocks and all, I decided to find a cool rock to commemorate this landmark event in my life. 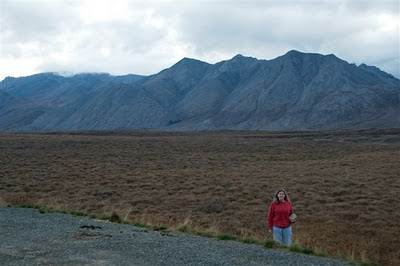 The Fisherman took my picture to commemorate the commemoration.
See my pretty rock? 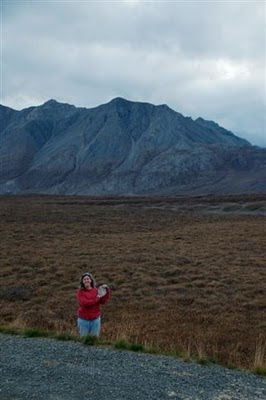 Not really, huh? Too bad because it's cool. It's very pale grey with a white quartzite (or something) stripe in it. There are lots of grey and white rocks like this in Alaska, but I had never seen one this pale. They're usually dark grey, so this one was special. Of course, it had to be a two pounder.


We stopped at Coldfoot again on the way back from the North Slope.
By then it was dark. 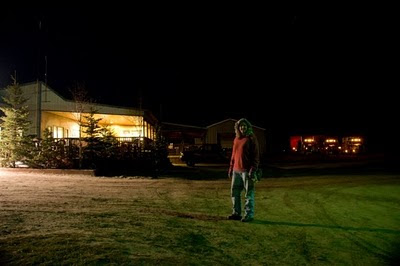 See the trucks? It really is a truck stop. What a job that must be, driving a big rig all the way to the Arctic Ocean!
So, now I've been to Fairbanks, the Dalton Highway, the Arctic Circle, Coldfoot, the Brooks Range, and the North Slope.
And....... seen the Northern Lights. Don't miss tomorrow's post. I'll be putting up some of the great Aurora shots The Fisherman got.
Posted by Judi at 10:05 PM