We're on a slight grade and all the run-off travels downhill to our foundation where it soaks in, saturates the ground, and ends up in our basement.  So, we've dug some shallow trenches around our house to divert run-off water around away from the house.  We still get water in the basement but it helps.  With the heavy rains we've been having lately, we've had a ton of fast and furious run-off.  During the rain, it just comes downhill in sheets and streams.  I came home Thursday after the nasty storm I dodged by staying in town longer, and saw tons of standing water all around the house.  I got the rake out and got in the trenches so to speak.  I deepened high spots, dug tributaries, and extended the ends farther out away from the house.

These are photos taken at around 6pm yesterday.  It rained hard for an hour earlier in the day, then it came back on us at dinner time in a steady medium strength rain  that lasted about three hours. 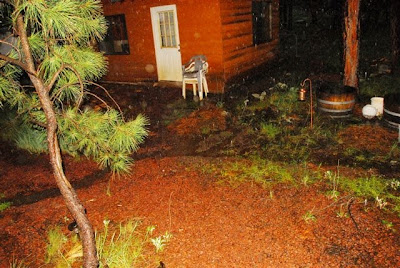 It was very dark for that time of evening, but not as dark as these photos appear.  I had to use a flash to get the trenches to show up at all and it made the background look like night.  It was daylight, but super darkened by the storm.  Very grey.  The house was too dark to read a book without lights, even next to a window. 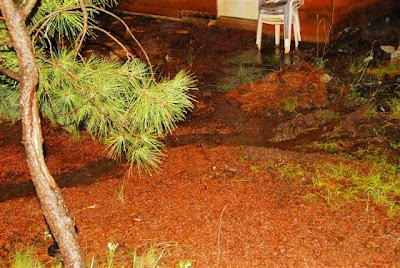 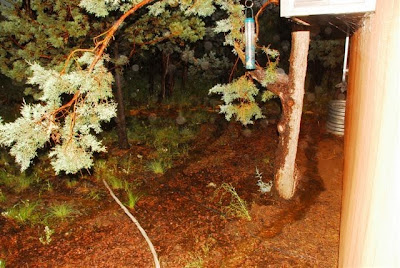 The damage is done as far as water coming in the basement.  The trench improvements won't keep it out, but perhaps it will bring the end a few days sooner down the road.
Posted by Judi at 10:11 PM