A Dock, A Letter, and My Dad

I was just going through some old photos in my computer, deleting the fuzzy ones and dark ones.  I came across a couple of photos that remind me of my Dad.

In 2007 The Fisherman camped at some new friends' home on a lake just down the road from where he worked in Alaska.  When I went to visit him that summer, I spent a lot of time alone while he was working.  One day, I walked out to the dock of this little lake and wrote my Dad and his wife a long letter.  It was a special time to me.  I felt very connected to my Dad for that hour or so.  He loved planes and there I was, looking out across a quiet little lake at a couple of float planes parked around the edge of the water.  He loved learning about new places and he loved it when I experienced something he didn't get to do but would have liked to. 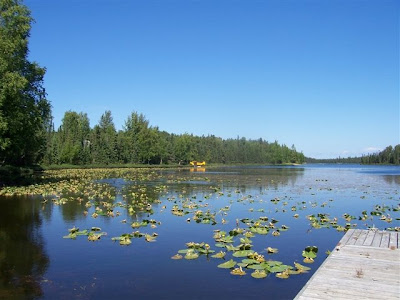 I wrote to him about the planes across the water, about the planes taking off or coming in close for a landing on a neighboring lake just a strip of land away (to the left behind the trees). I wrote about the bald eagle I heard calling from the air waaaaay over my head as he made circles in the sky on his way up and up.  I wrote about the loon I saw dive under water and head straight for me.  I watched him swimming like  a  torpedo under water right toward the dock.  When he got about 5 feet away he saw me sitting there and abruptly veered off to my left.  He eventually popped up a safe 20 feet away from me. 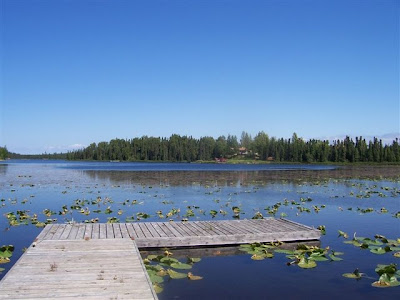 When I began writing the letter, a float plane took off  from the neighboring lake to my left and flew past me on it's way to some chartered fishing adventure.  As I was writing my closing lines, another float plane came roaring in behind me for a landing on the same lake, flying low over me, banking left and just skimming the trees to land on the lake across the road.  I told him about all of it. 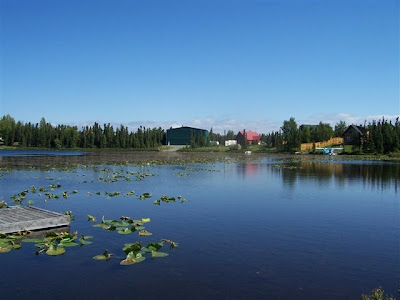 Though I wasn't really with Dad, I hold this as one of my favorite memories of being with him.  I knew that all the special and wonderful things I was experiencing as I wrote the letter, he would love.  He would visualize them.  He would smile.  He would laugh and say, "Wow!"  or "Boy, I'd sure like to see that!"  And he would probably get tears in his eyes...over the fact that his daughter was living them,  that I was sharing them with him, and that he could live them through me.  Dad was like that.
Posted by Judi at 6:54 PM