I have been putting off my blogging...just not ready to write about Dad because I've been too sad. But seeing how I left you all hanging with the last post about the memorial service being the next day, I thought I should write about the service.

First, let me tell you that while my dad's career was that of physician and surgeon, he was in the Navy at two different times in his life. He trained as a bomber pilot during World War II. He was blessed not to have to see active fighting in that the war ended within a week of his graduation from Naval Aviation school.

He wanted to use his medidal career in the Navy and inquired about re-enlisting even before he had graduated from medical school. My how my life and that of my brothers would have been different had they accepted him. You see, my dad was a D.O. rather than an M.D. He was a Doctor of Osteopathy. Simply put, a D.O. is a Medical Doctor and a Chiropractor in one, although it is more than that and not exactly chiropracty. DOs are fully medical doctors but they have the added education in musculo-skeletal "manipulation". DOs are widely accepted now, but back in 1950 when Dad expressed his interest to the U.S. Navy it was not so. He received a letter which basically said the military did not accept DOs for medical service, only MDs. While DOs were welcome to serve in non-physician ways, the Navy would not allow them to practice medicine the same as MDs. Furthermore, the letter stated, they did not expect to ever accept DOs to serve as military physicians in the foreseeable future.

Fast forward to 1980 and the Navy was only too happy for my dad to re-enlist and practice medicine for them. So thrilled were they that they gave him the retro-active rank of Captain of 12 years, because of his excellent professional credentials. He spent six years serving soldiers and their families on two different bases. He even had two stints on the USS Midway and a temporary assignment in Iceland. He loved it all. 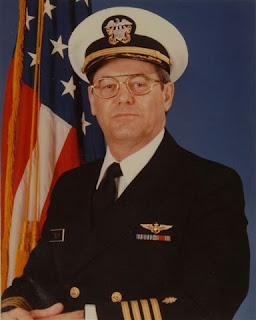 Because of his military service and how he loved it, we were encouraged to inquire about military honors for his memorial service. They were approved with flying colors. 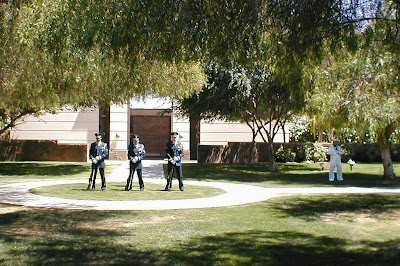 What a sight.   And what an honor for us to have them there, honoring our Dad.
Posted by Judi at 4:07 PM