13 if you count the two years we owned the property but hadn't moved up here yet.
This past summer I wrote about how after 11 years since moving to our five acres I FINALLY saw some elk on our land (See July's Elk Tonight). REALLY on our land (not just running across the road), and I REALLY saw them (for a nice long while). Another thing I have longed for, hoped for and waited for, is to see - from inside the house - elk close by outside.

Today as I was dashing to the kitchen sink just before leaving for town, I looked out the garden window above the sink and saw a young elk. RIGHT THERE about 30 feet from the house! I whisper-yelled to my husband "Come here! Quietly, and right now!!" Intuitive man that he is, he asked "Do I need my camera?" "YES!" I quietly hollered.

We could see them out three of our windows and we went to each one and back again as the elk moved about the yard. We both took pictures. Some of mine came out hazy because of the 4pm sunlight and also the window I was shooting through. But I kind of like the "Doris Day" glow it adds to them. It seems to express some of the wonder and drama the event held for us.
I love this hazy bright shot of the yearling taken from the back door. 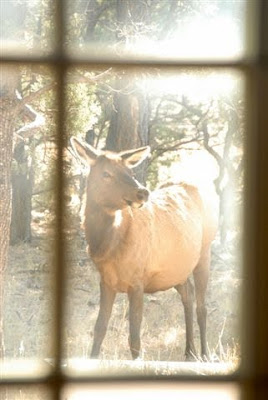 She was standing near an old bathtub we have used as a flower box. Unfortunately, nothing is alive in it right now. We may someday line the outside of it with vertical logs to cover up its bathtubbiness.

This is SO close to the house. It was so exciting. 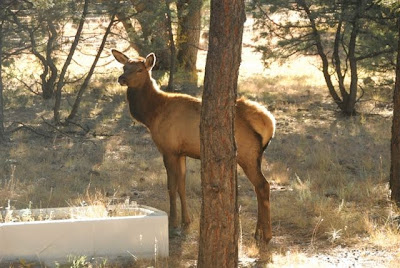 I also love this one with three elk in it, the sunlight on the young one in front, and the way the window pane makes the photo look vignetted. 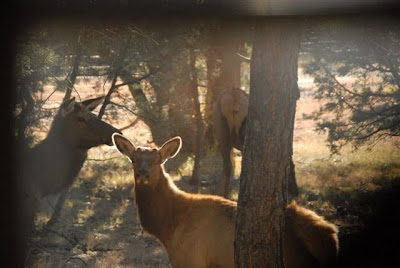 They came to drink from our horse trough. We have no horses; just the trough. It was our primary source of grey water for the first few years up here - but that's another story for another time. Today, boy were we glad it had water left in it from the summer rains.


Walking over to the water, taking her turn. 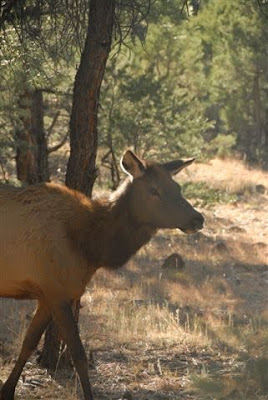 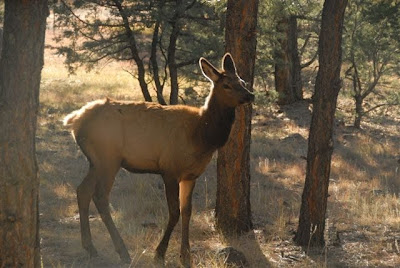 The trough is located right under our dining room window. When one girl came up from her drink, I took these. Note the antique carpenter's level in the foreground. It's what we use as our window brace. (Rebar, hollow piping, antique carpenter's level...it all works.) She's even licking her lips. Mmmmm, that months old water with dirt and floaties in it tastes good! 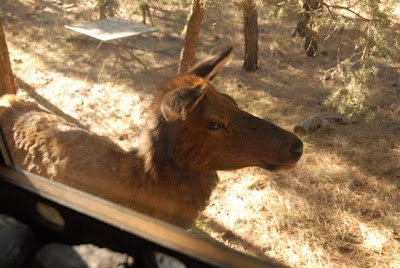 She couldn't see us, though we were right inside about 2 feet from her. The windows reflect, so for the most part all she saw was the forest reflected in the window. But she must have been able to sense us or perhaps see vague motion through the window beyond the reflection. She raised her head to get a better look. 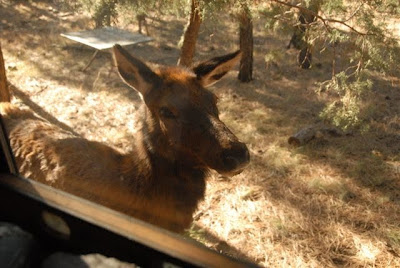 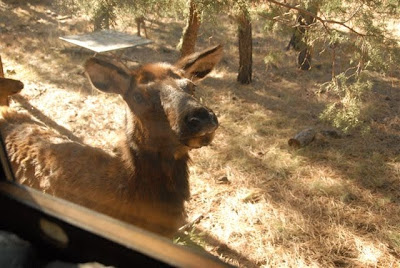 ...she looked right at me, curious about this half sight, half sense she had.
She began to move away from the trough and the window. As she did, the baby - who had been drinking from the end of the trough almost entirely out of my view - began to follow. 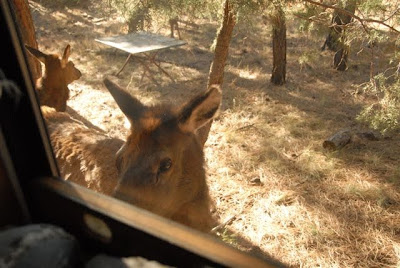 I was able to get this great view of her precious face. 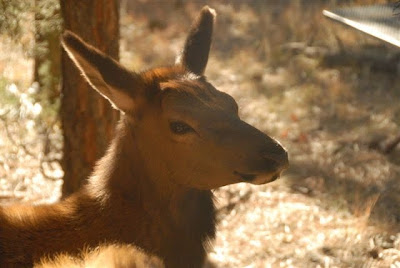 The mama and baby moved off. Soon the other two did as well.
A parting shot. 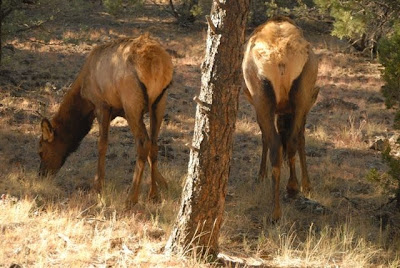 This was so cool! What an awesome gift to have these gals come so close. We are now determined to keep water in the trough and when in town I ran over to Wal-Mart and bought a salt lick. We want to keep them coming!!!