First off, here's a photo of our booth. Every single day of both festivals I forgot to bring my camera. So these are photos from last year's Fall Festival, but you get the idea. 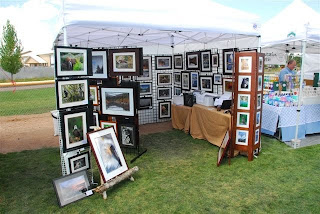 And here's one of The Fisherman standing next to one of his popular bear photos. The one below it is rather popular, too. We call it Autumn Reflections. 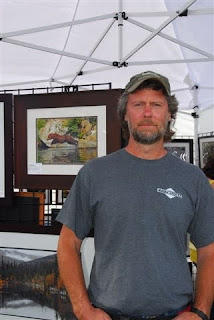 Festival #2 was a wild life festival. We waffled back and forth on whether or not to actually show up. The organizer was very nice and said she understood totally if we chose not to come. There was only going to be two other actual vendors there besides us. Verrrry small festival indeed. We hemmed and hawed, asking each other repeatedly, "So what do you think? Should we do it or not?" We finally decided, though it would probably be a lot of work for a little money, we should go ahead and give it a try. In the morning, the winds were picking up, which took the wind out of our sails. We decided to cancel. Then, my always-thinking and ever spontaneous husband came up with a set-up idea that would be virtually wind proof. We were on again at the last minute. We showed up later than intended and were encouraged by the weather and the feel of the place so we went ahead and did a fairly full set-up. It was a fun festival. Very small, but fun. We made a couple hundred bucks, too, so it was a good day.

Since it was a wildlife festival, most of the booths were informational and/or educational. Fish and Game had a booth that included bear hides, bear skulls, a big horn ram skull with HUGE curling horns, as well as several table-top enclosures each containing one of Arizona's native rattlesnakes. Mmm, boy. Actually, they were very interesting. During set up, one of the guys raised his voice a bit and said, "Uh oh! We're missing two snakes." Funny guy, that one.

There was also a live Red Tailed Hawk and a live Bald Eagle. Very cool. they stood on their handlers' arms or on an astro-turf covered perch while the handlers gave info and answered questions about them. (Average wingspan of an adult bald eagle: 6.5 feet.)

The wolf that was here in August was back. He has actually GROWN in the last two months. He looked a lot beefier to me, much more filled out. This time he was enclosed within a fence and the director/handler sat inside with him. I was sure glad I went in August where the wolf was leashed and walking around the whole day. I got a good share of petting him this time, though, during set up and take down times when he was being walked. We are looking forward to visiting the Wild Spirit Wolf Sanctuary in New Mexico sometime in the next few months.

THEN, there was this indoor avian show. They gave a talk - in the acoustic nightmare that was the metal garage in which it was held - and brought out three different birds. One was a black and white crow that did a cute demonstration of flying back and forth from the handler to volunteers (aged 5 to 75). The crow landed on each volunteer's arm and then took from their other hand a pop can in his beak which he flew back to a little recycling bin across the room. Another bird was a huge owl from Africa. When the handler came out from behind the screen with it on his arm, the crowd erupted into the oooooh's and aaaaaah's of surprise and awe. It was very impressive.

But the best, most thrilling part for me was the flight of the Auger's Buzzard. We learned that only Americans mistake "buzzards" for "vultures." Actually a buzzard, in the rest of the world, is a hawk. We're the only ones that think the term means a vulture-like creature. You can see a photo of this hawk at the Avian Ambassadors website. They had handlers set up at diagonal corners of the audience. I had the perfect seat. I was sitting in the last row, two seats in from the center aisle. The hawk flew from my front left to the back right.... right behind me and to my right about 8 feet. Before beginning the flying demonstration, the speaker explained to us that birds conserve energy by flying low in a swooping arc. He said essentially, if you're in it's direct path, you might get scared as you see it flying low toward you, but don't worry. And don't make any sudden movements like raising your arms or freaking out. I love birds but I get an involuntary skin crawl and body shudder when they fly real close to me. I was imagining what it would be like to have this thing fly a foot or even 18" over my head! Well, it's a good thing I didn't have to find out because this hawk swooped down from the man's arm and flew literally inches from people's heads! Inches! It was amazing. The family sitting in the end seats just three seats away from me had this beautiful, BIG, grey and white hawk with a 3 and a 1/2 foot wing span flying right into their faces just a couple inches above their heads as it made it's slight ascent toward the other handler's outstretched forearm. WOW! I wish I could have gotten a picture. But not only did I not have my camera with me, I was also so awestruck that I wouldn't even have been able to shoot. I noticed some friends sitting toward the front on the left hand aisle and the bird flew right over them each time. When it was over I talked to them and the wife said the hawk actually caught a little bit of her hair while flying past!!

I probably would have had Fearful Nature Encounter #3 and had to write some pathetic, humiliating account of it here. (To read about Encounters 1 and 2, see September 7th's post entitled Leaves Are Turning Yellow. The account of our Bear Mountain hike is under the sub-heading of Sept 5th.) As it was, I was so thankful for the beautiful, amazing things I saw so close up. I love the gentle flare and curves of the very outside wing tips.
Back out at our booth, there was one woman who came to the booth while The Fisherman was away. I could tell she was another festival participant by her hurried only-have-a-second manner. She only stayed about 30 seconds but was so full of energy and enthusiasm, exclaiming how awesome the photos were and that she'd be back. I noticed then that she had on a radio station jacket. After lunch she came back to meet The Fisherman. She was doing a live remote and wondered if he would like to do a a brief on-air interview. A couple minutes later, The Fisherman was on the radio. She talked up his photos, gave out his website address, and asked him a couple questions about his work, how close he gets to the bears, etc. I didn't hear it, of course, but the whole thing was pretty exciting. Later, as we were forced to start taking down 30 minutes early due to increasing winds, a dad and sons came by saying they'd heard him on the radio and wanted to come see. Cool!

All in all, we had a lot of fun at this small kid-oriented festival. We're glad we did it but are uncertain about doing it again next year. If we don't participate, we'll probably attend it because it's so fun to see the creatures.
Posted by Judi at 10:07 AM