For all of you who are curious what it's like for us as we "Van Camp", in a few words, it's:
TIGHT. SMALL. CRAMPED. CROWDED. STUFFED. 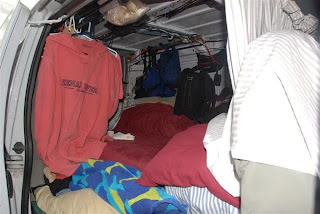 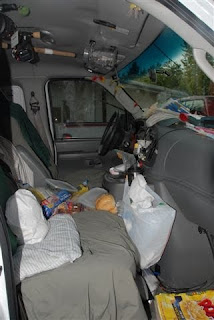 (The box of Sugar Pops --excuse me, my age is showing..."Corn" Pops-- is empty and makes a rather nice floor mat. (Seriously, it feels better under my boots than the constant "carpet" of gravel and sandy dirt.) 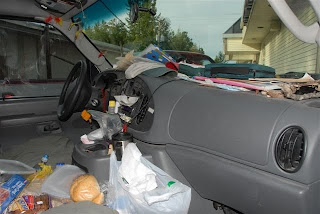 Plus: We have everything we need.
Minus: But where the heck is it?

-We have a TV/DVD Player...hanging from the ceiling. (Requires minding our shins in the night.)

-We have a refrigerator in the back which we can plug in at a camp spot or run off an invertor while driving.

-We have so much extra stuff which doesn't have a permanent accessible home in the van that we are constantly shifting it all around day and night from on and off the bed so we can sleep or drive.

-It's relatively dark in there, even in Alaska. No side windows.

-The dashboard is my husband's bookcase. (I can't see over it all so when he's working and I have the van, first I have to take everything off the dash and stack it on the passenger seat. Then I have to put it all back when I pick him up because there's nowhere else to put it.)

-The door frame is his fly case.

-My armrest is the hat rack.

-The ceiling holds his fishing poles. Thanks to more broom sticks, shower rods, and bungies.

-His "dresser" is a series of duffle bags suspended from the ceiling via various shower rods and broom sticks. My dresser is a carry-on bag on the floor between the bed and the side door.

-Don't even ask where the bathroom is.

-Each morning we have to take down the shotgun from it's slings attached to the ceiling and place it on the bed where it won't move. Each night before bed, we place it up there, out of our way.

-Our kitchen cupboard is the big gaping hole between the front seats. Try as I may to keep it organized, it always seems to be a big jumbled pile of stuff. (How's that bread lookin' down there on the bottom, honey? Hey, look! There's those apples we bought in Canada 10 days ago. I wondered where they went.)

It can be frustrating (usually getting moreso as time goes on) but it's also kind of nice. We can go anywhere and always have a place to sleep. We can be spontaneous and stay overnight if we want. It's kind of freeing. Of course, it would be nice to have a luxurious, expensive motor home...but alas. Maybe someday...an inexpensive one. (Come to think of it, even the tiniest ones are expensive.)

But for now, we're doin' fine.