A local treat in Arizona is Indian Frybread. It's a big hit at festivals and fairs. I've been wanting to learn how to make it for years now. Last weekend I had the privilege of joining some Native American friends in making frybread for a work weekend we were part of. It was so much fun and those ladies are so good they can make frybread in their sleep!

While I had hoped to come away with a recipe, I realized quickly that this idea was a laugh. Like when I asked The Fisherman's Grandma for the recipe for a peach cobbler she whipped up in my presence, I got a similar response. Grandma grew up in a "holler" in West Virginia. When I asked her for the recipe, she said, "Ohhhh, Honey! I've been cookin' since I was nine years old; I don't use recipes!"

So it was with my expert frybread friends. Their "recipe" used their hands and bowls as measuring devices. They're used to making it in large batches for large family functions. A bowlful of flour, a handful of salt, etc. Hm.

I think I could approximate their batch of 40 but I'm still working on calculating that down to a batch of four.

This batch produced about 20 large frybreads. 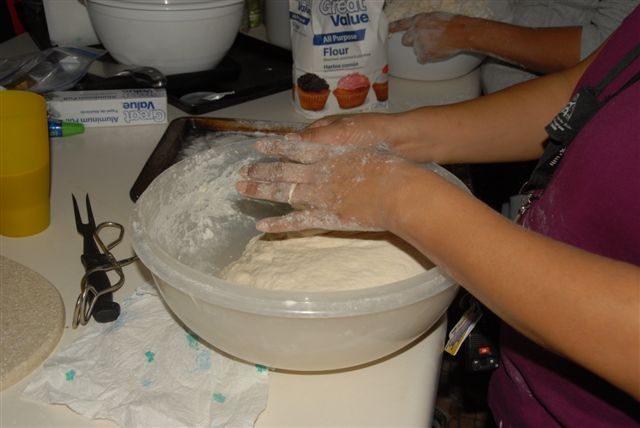 This is how they kneaded the dough. Right in the bowl. Ingenious. 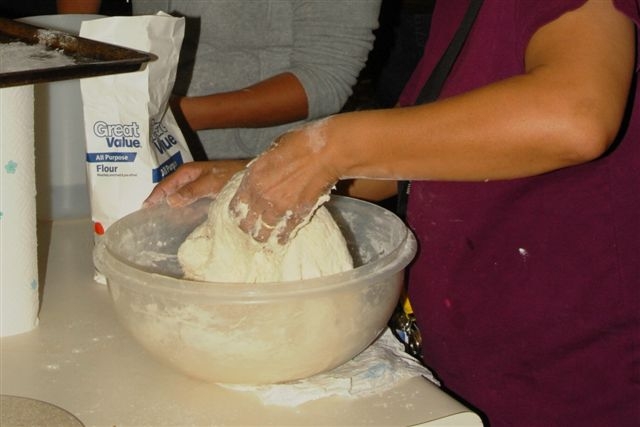 I didn't figure this out until I tried making my own at home. And didn't knead it. While in the presence of the pros I thought they were merely mixing it. After all, they didn't take it out and knead it on a floured counter like I'm used to. I think it's pretty neat that they've mastered the art of kneading it right in the bowl. I love the beautiful consistency of her dough. This photo and my memory of how the dough moved in her hand will be my guide. 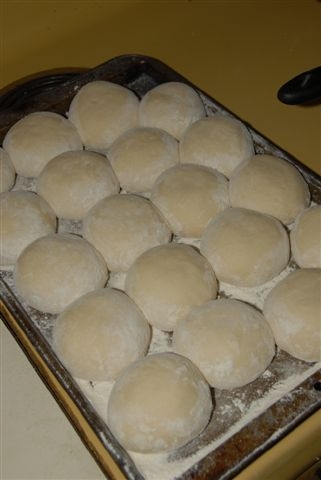 Three batches, each made by a different woman, produced a total of about 70 dough balls. 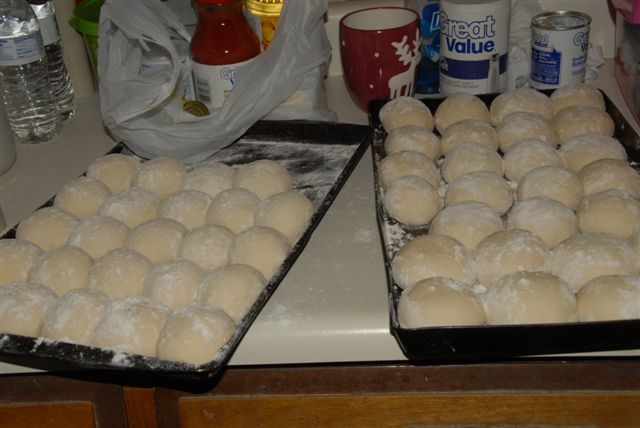 Next up was flattening them out. This is where their experience really shines.
First they flatten out the ball, making it a disk.
Then they run their hands around the outside edge, letting the dough disk hang down from their topside grip. This stretches it bigger still.
Then they start flapping. That's the best way I can describe it. They pass the dough from one hand to the other, flapping it back and forth. Occasionally they stop and do a little shaping. 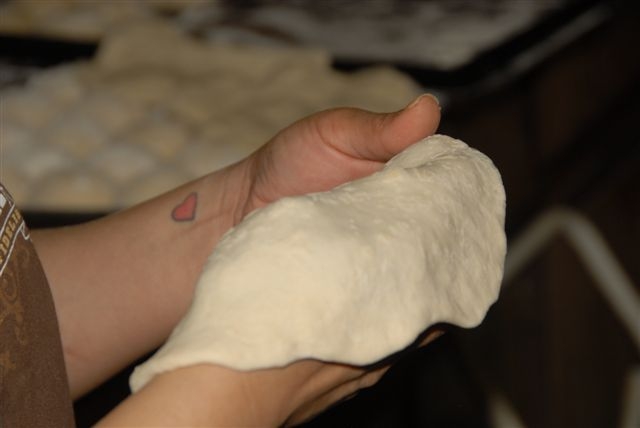 I was a total klutz at it, but my first attempt came out pretty good. I was using my palms and fingers but they do it differently. 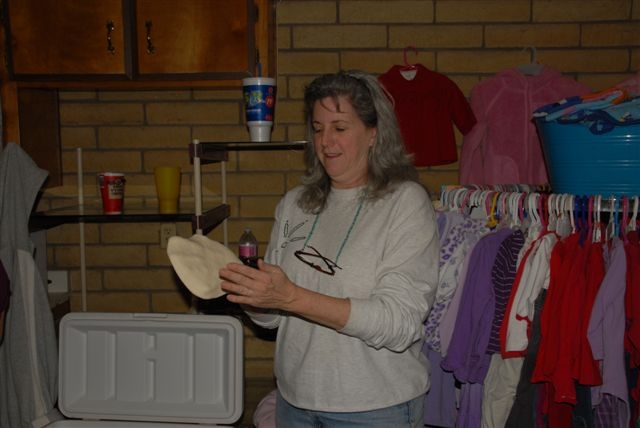 When I tried to learn their way, I was a dunce. They actually lay the dough across their thumb and wrist, rather than across their fingers. This stretches it nicely without the pressure of fingers creating weak spots. These ladies would stand in the middle of the kitchen, or lean with their backs against the counter and just flip-flap away. I was in such danger of losing control of my dough that I had to stand over the counter. I flipped my dough right off my hand several times while they were just flap-flap-flapping away.
I wish I had a sound recording of their handiwork. They were so fast! It was like their hands were clapping together. Since the dough mainly lands on the lower part of their hand and their wrist, they actually were clapping. Back and forth, back and forth, they'd flip one hand over the other and back again. It made a pock-pock-pock sound. A clap-clap-clap. Dozens of time for each frybread. I was in awe.
Finally, it was time to fry up my very first frybread. 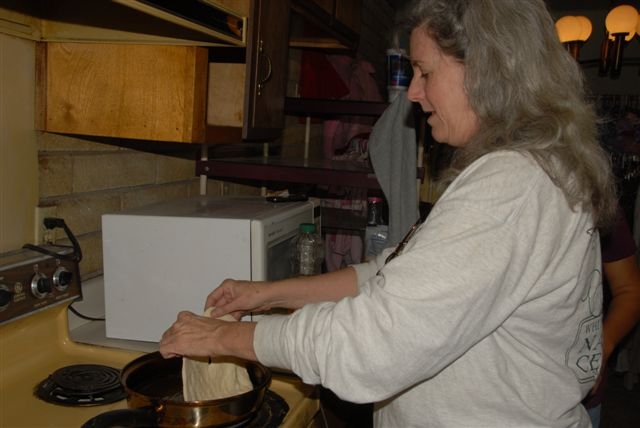 Instinct told me to lay it into the oil starting at the front of the pan and move away from me. That's not how they do it. They start at the back and lay it down toward them.  And they do it perfectly. My first attempt folded under the edge.  I learned that in the superstition of native tradition, this means my husband is cheating on me. We all laughed. It seems that "Traditional" has become a religion among Native Americans. The value of their heritage and traditions seems to have evolved into a religion, one full of superstitions. My friends are all Christians, though, and worship God rather than the traditions of their heritage.

When you put the dough into the oil, it bubbles up with pretty bubbles. Note the odd shape of this frybread. It's one of mine. When my friends put theirs in the pan, it perfectly fills the pan. Perfectly round, perfectly out to the edges of the pan. Amazing. 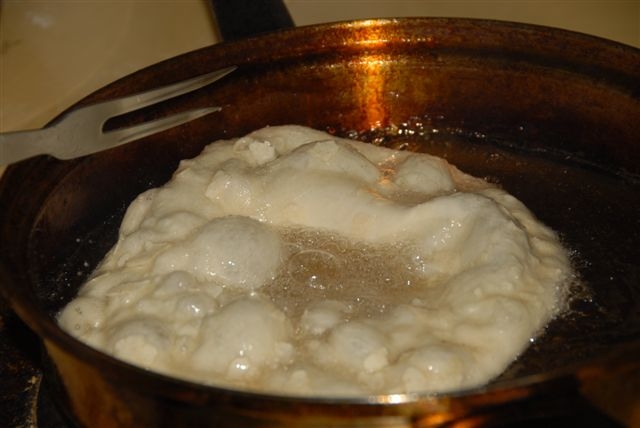 When it first goes into the oil, you're supposed to poke a couple holes in it. That's so it won't over puff. Some of them stretch some holes in the dough before they put it in the oil and others just use the fork to poke holes once it's in. See my folded under edge? Wait, where's The Fisherman, right now? 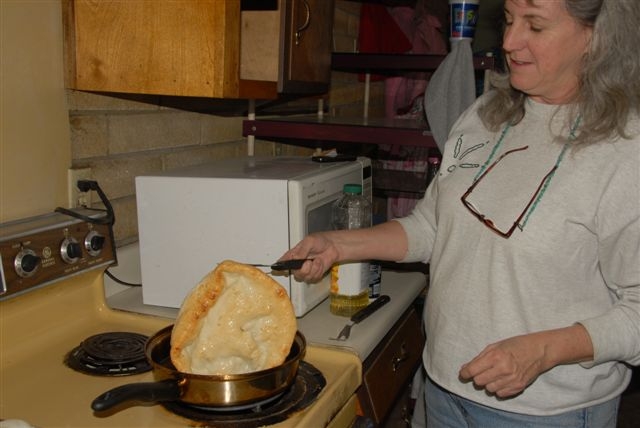 The bottom of the frybread looks entirely different. No bubbles to speak of but the rim and the center seem to stand out and get brown while an inner ring stays pale. 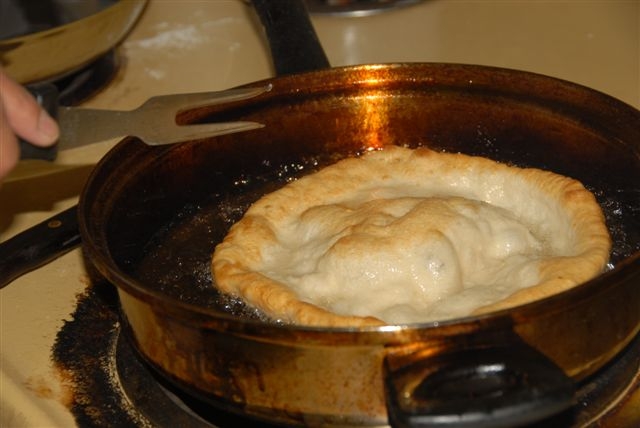 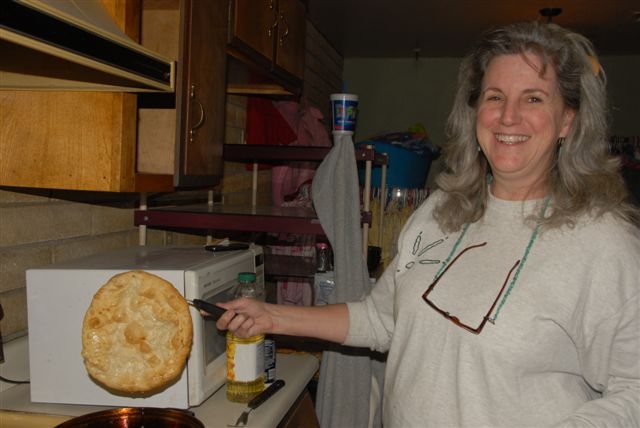 Making frybread is quite a social experience, at least when you're making it for a big party - or work crew. We stood around talking, flapping, and frying. We'd each shape a dough ball and wait our turn to fry it up, chatting together all the while. Sometimes we'd get ahead in flip-flapping the dough and let them set till time to fry. 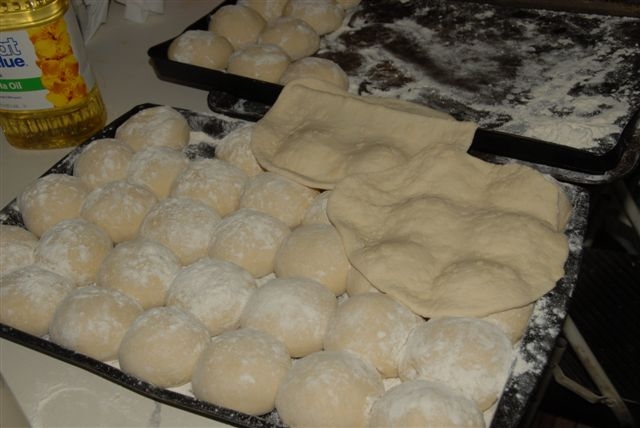 In the end we had several fine stacks of beautiful frybread. 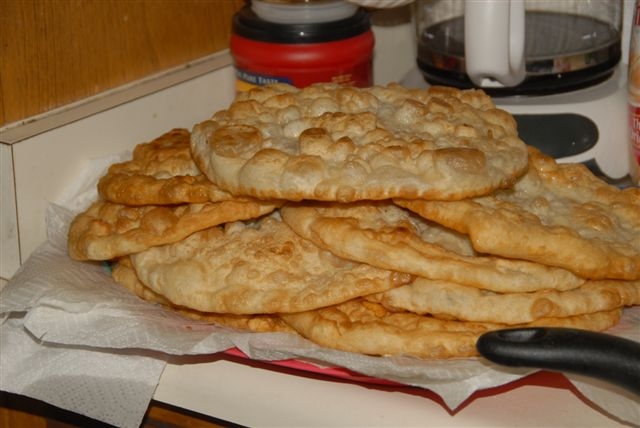 This stuff is so simple but so yummy. Just flour, baking soda, salt and water. But so, so tasty. To keep them warm, we layered them into an ice chest, ironically. We took them over to the work site along with pinto beans, lettuce, cheese, tomatoes, and salsa for Indian Tacos. 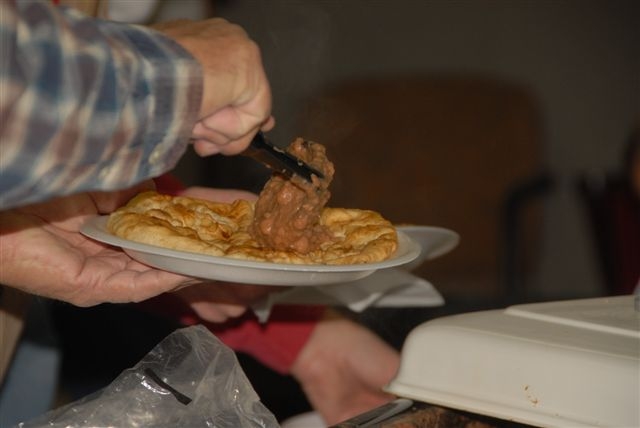 (Now, I know my English friends are going to cringe at the sight of these mashed-up, ugly-colored beans, but they are a delicious staple out here in the Southwest. They're so normal that it's hard to stand back and imagine seeing them for the first time. But trying to do so, I can understand how they look absolutely gross. Trust me, they're not.) 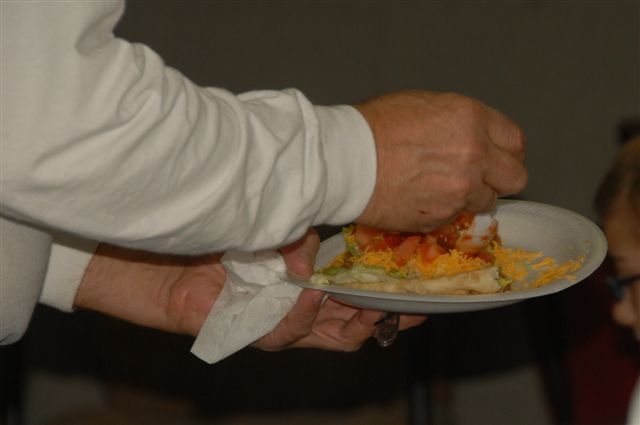 They were a big hit. And I was thrilled to learn how to make them from Native American Indians, sweet Christian women who I am privileged to work with and call my friends.
(In case you're wondering where we were while making the frybread, and why there were racks of clothing nearby: we were at the temporary office of a crisis pregnancy center which also sells clothes and baby items for "internal" money earned by clients taking parenting classes. The work weekend was one of the final pushes to bring their new center on the reservation to near completion.)
Posted by Judi at 7:31 PM