I love books.
I love old books.
I collect old books. Or at least I did for awhile.

It all started when I went into a used bookstore and came across an old copy of Laura Ingalls Wilder's, Little House in the Big Woods. I paid $6 for it that day and had no idea I'd embarked on an antique book collecting phase of my life.

I began collecting old books before it became popular and I found them in little antique shops all over town. I rarely ever paid more than $10. Many were under $5. I have some beautiful ones. I have some homely ones. Some I bought because I liked the cover. Some I bought because I wanted to read them. Some I bought because I like the author. I have several Louisa May Alcott books, including Little Women, Little Men, Jo's Boys, and Good Wives. Some are classics, like Ben Hur, Robinson Crusoe, and Paradise Lost. I have books of poetry, books of short stories, old Bibles, and old song books. I fell in love with a little leather book inside a case at one antique store. It was only about 2" x 2.5". It was $15. I hated to pay that much and debated a long, long time. It was a book of hymns. It was only the words, no notes. I didn't recognize the name of the writer/composer but I finally caved in and bought it. Turns out it a book of compositions by the man who wrote the famous Christmas hymn, Joy to the World.

I bought a book for my sister-in-law because of its simple one word title, which was her name. She loved it. One day I found a book I knew I just had to buy for a friend. Long ago he and his wife gave each other hillbilly nicknames. He's Willis (Willis You Killus) and she's Edna (Edna Mae Knot). When I found a book titled, Edna, His Wife, I just had to get it for him. Little did I know he also collected old books. It was a hit.

When we bought our land up here in the woods I began noticing books with fun titles pertaining to our new adventure getting back to nature. Thus began a miniature "collection within a collection" of books with nature titles. I have some of them together on a special little book shelf. 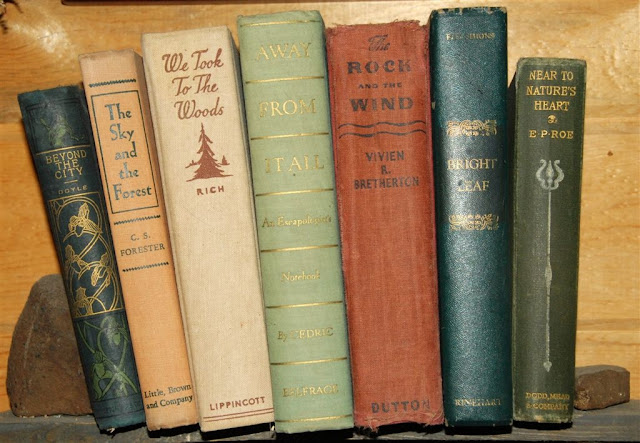 The Rock and the Wind has a funny meaning to me. We bought our property in the month of February. Winter was beginning to fade away but Spring had not yet come. Two things I have found most annoying in my life are wind and rocky terrain. This piece of property was beautiful and was the best thing we'd seen for the price. We were thrilled. It was our dream come true. We were so happy. It wasn't until after we'd bought it and spent a few weekends up here that I realized how dang many rocks there were. Rocks were everywhere. I'd trip over them, stub my toes on them, roll my ankles on them. They are just everywhere.  Aargh. And then came the wind. We discovered that every spring and every fall, our area gets some nasty high winds bringing in the change of seasons. We're talking 40+ mph gusts and weeks on end of 25-30mph winds all day long.  So, when I found a book titled The Rock and the Wind, well, it was a must have. I bought it with big grin in my heart, knowing how perfectly God had sort of "tricked" us into buying this land when, in our shopper's delight, we didn't seem to notice all the rocks and hadn't yet learned about the winds. I'm so glad He did.
Posted by Judi at 11:32 PM