Long grey hair. Powerfully influential voices in my head resound with the notion that:


"A woman over 40 should especially not have long grey hair."

I have kept my hair long or longish for many years now. When we first moved up to the mountains it was really long. Then I began wearing it just below my shoulders.

My grey began over 20 years ago. Early greying runs in my family. In fact my first grey hair came at age 19. Thankfully it staved itself off for more than a decade before too many more showed up. Twenty some years ago, my then fiance, bless him, recommended I not dye my hair as it grew increasingly grey. At first I was a little leary of this image-threatening idea. But, I also kind of liked it. I don't recall actually ever making the decision not to. Once he said those loving, supportive, and encouraging words, I just didn't really think directly about it much. I've always been on the more "natural" side. A touch of laziness probably had something to do with it, too. That, and I don't think I was too keen on all those chemicals...and the trial and error...and the cost...and the time. But his most outstanding commentary on the matter was this: "What do you do when you get sick of the hassle, the chemicals, the expense and the time, and you just want to stop? By then you'll be way more grey than when you started and it will be a huge shock, not to mention a challenging process, to go back to natural." What a blessing his advice has been. (I just don't think he expected me to go this grey this early. Oh well. HE said!)

I confess, I had an advantage though. My grey started in full force in the back of my head. I had a touch of the skunk look. A subtle skunk. But, hey, it was in the back and I just don't look at the back of my head that often. Around my face retained more of my natural brown. So, with a touch of oblivion and a touch of that no fussing laziness, I actually forget how grey I really am! What a dope, right? But it seems to serve me well as I still get to appreciate more brown in front. When I look at my face in the mirror, I am deceived into thinking I'm less grey than I really am.


This is me last September (2010) with some of Martin Buser's Iditarod sled dogs. He allowed us to go on the "free run" with them. While my hair looks pretty darn grey here, wait till you see the next one of me walking up the trail. 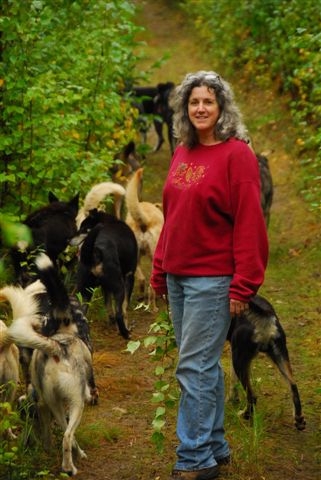 Now there's a lot of grey! 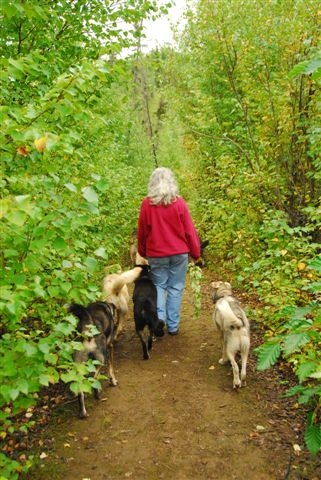 While that denial and oblivion is a mystery in itself, there is, however a greater mystery. There is one feature of my particular pattern of going grey that can get me pining for my youthful brown tresses. The very undermost layer of my hair - about a half inch worth - is completely and utterly my original dark brown color. (Thanks, thanks, couldn't have been the top layer, huh?) Occasionally I take out the mirror, swoop my hair up and gaze upon what used to be. I sigh and I pout a little. And then I go back to marvelling at the completey, utterly, and thoroughly grey patch next to the rest of my hair that is almost totally grey.

I'm glad I've never dyed my hair, though. It has been freeing to let it be what it's going to be. I'm glad I didn't embark on the maintenance commitment that dying it would have involved. AND, I am enjoying the encouragement of the many comments I receive in praise of such a move. More and more women are coming up to me saying how they like my grey and that I have given them courage to let theirs go back to natural. That blesses me. Who'd a thunk it?

But now...another dilemma. Short or long? I'm voting for long. Why? Probably a mix of reasons which might include, a touch of unconventionalism, a touch of rebellion maybe, some of that funky artist thing, a secret bit of hippie inside me, and...I find it beautiful. Just take a look at some of these photos.