I'm finally able to scan on my computer. I got online to HP's Help Chat Center and figured out that I had a bad USB cable. I'm very happy that I can now scan!

What inspired me to address this longstanding and mysterious problem is a little photo contest that Ree, The Pioneer Woman, is having. Ree has several facets to her blog and she has thousands of followers. She's does little contests in a couple areas of her blog. Sometimes it's a trivia quiz and now she's also doing photo contests. She offers a prize, something she herself buys with her own money and just gives away for fun. I've never entered one of her contests before but the current one captured my interest. It's a Dog Photo Contest.

It's been six years since I had to put both my sweet dogs down. Some of the best photos I have of them are pre-digital. After they passed, I found a perfect little photo album. It opens up to include two halves, each with a frame for that half. I was able to put photos of Keezie on one side and Rooster on the other.

So, I thought I'd finally figure out what kept me from being able to scan and see if I could get some photos in the computer to enter Ree's little contest. After spending a couple hours getting the problem solved, learning how to save the scan to a file, exploring the various features and getting the hang of it all...I managed to get three photos scanned to my liking. I'm off to a good start.

And, of course, I thought I'd share them with you. 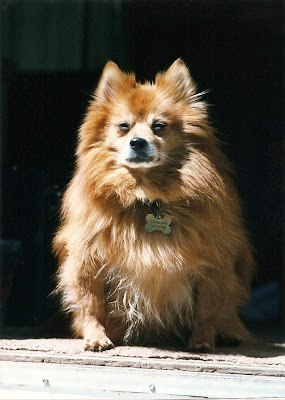 This photo was taken during construction of our home/cabin. When we bought our land, it came with a huge blessing: a 12x50 mobile home. Though it had no running water or electricity, we were able to live in it very comfortably while we built. In this photo, Rooster is sitting in the doorway catching some rays. I love the look on his face. It's like he's soaking in all the warmth of the sun, getting sleepy, just lovin' it. I also detect a little remnant of a "surveying his kingdom" look. I love his rolly polly pudginess, too.


And then there's Keezie. She was beautiful. A Keeshond. 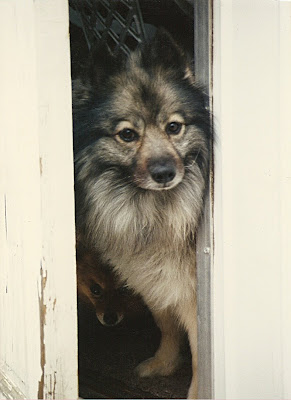 I caught this photo of her in the same doorway of our trailer. I love this photo of her. (And if you'll notice, it also includes a little Pipsqueak checking things out from a lower vantage point.) I love how Keezie is framed on one side by the white door with peeling paint and on the other side by the trailer wall. I love her look. She was so pretty.

I didn't get the third photo uploaded to this post before I had to shut the computer down and get on my laptop. The laptop uses about 1/3 the power as my desktop. When the sun goes down and I'm not done on the computer or internet, I switch to the laptop. Only problem is, it doesn't have all my files.

But what a blessing that it's possible...and that even I can do it now!
Posted by Judi at 6:56 PM